Shades of Magic Vol. 1: The Steel Prince by V.E. Schwab 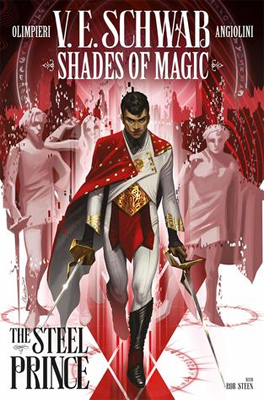 Category: Comic Book Reviews
Author: V.E. Schwab
Genres: Comic Book, Adventure, Fantasy, LGBTQ+, Magic, Pirates, Young Adult
Series: Shades of Magic
Series Number: 1
Page Count: 112
Publisher: Titan Comics
Illustrator: Andrea Olimpieri
Delve into the thrilling, epic tale of the young and arrogant prince Maxim Maresh, long before he became the king of Red London and adoptive father to Kell, the lead of A Darker Shade of Magic! The youthful Maresh is sent to a violent and unmanageable port city on the Blood Coast of Verose, on strict orders from his father, King Nokil Maresh, to cut his military teeth in this lawless landscape. There, he encounters an unruly band of soldiers, a lawless landscape, and the intoxicatingly deadly presence of the newly returned pirate queen, Arisa...

After finishing The Shades of Magic trilogy I wanted more and naturally, the graphic novels series beckoned. I was eager to learn more about Maxim Maresh before he became King and father to Rhys and adoptive father to Kel. In the trilogy, he seemed to be someone who was always so in control, always knew what to do and the idea of him being sent somewhere to “cut his military teeth” in The Steel Prince (let’s be honest that’s just royal talk for he’s done something he shouldn’t and his dad is pissed) just doesn’t jive with him as an adult. The events of these graphic novels are alluded to in the books, and I love that V. E. Schwab decided to explore Maxim and Isra’s past. It’s the perfect way to explore the history of Red London and add a different dynamic to the world she’s created.

I found that this first volume was the weakest out of the three graphic novels though as it focuses more on Maxim arriving in the Blood Coast of Verose and finding his place among the soldiers. Compared to the next two volumes it just feels quite lacklustre.

You can read many great books, including the Shades of Magic Trilogy, on Scribd the world’s original online reading subscription service right now! You can sign up using my referral code and get 2 months of free reading.