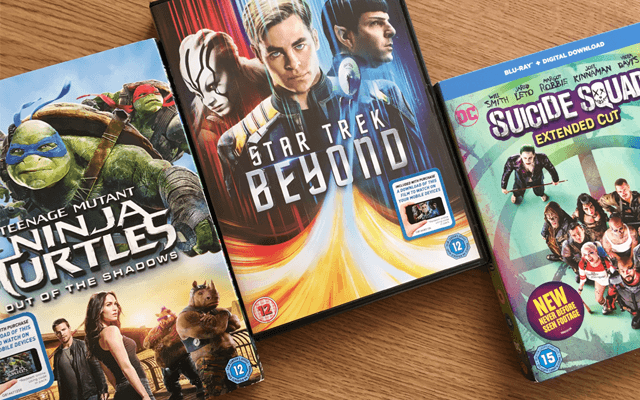 This month I watched a hell of a lot more movies than I normally do which was a combination of several factors; DVDs from Christmas, DVDs from my fiancé’s birthday, feeling awful due to a lovely chest infection and finally, drowning out the noise from our neighbours. The later not only gives me migraines, but also makes me really irritable. I think I now know why I’m so sensitive to it, so that’s a plus and a future blog post in itself, however, the movie thing is working. So here’s a run down on what I’ve watched this month and my thoughts on them. (Please note – This post contains affiliate links.)

I’m a big Arnie fan so I’ve seen the original a few times, and like with any reboot I wasn’t sure how this would turn out. I actually really enjoyed it. I’m a bit Kate Beckinsale and Jessica Biel fan so having those two as the leading ladies was great. Plus watching Kate Beckinsale switch accents and go pretty damn psycho was fantastic to watch.

I had mixed feelings about this one, and I think Chris summed it up when we got to the end of the film; “It felt like a TV episode”. It was good, don’t get me wrong, it just felt like an extended episode rather than a movie. Enjoyable, and interesting to see other characters have a bigger role, but ultimately felt a bit off. It was also very bittersweet watching Anton Yelchin 🙁

A random movie to keep my mind off the noise, this turned out to be very clever and well written. It had a great amount of British actors in it, which is a plus to me. However, it was a little bit predictable. Normally with spy/thriller movies I’m in the dark until the reveal happens, and this time I knew who it was. It was still very enjoyable to watch and I recommend it.

I’m pretty sure this movie got trashed by the critics, however, since it came out I’ve wanted to see it. I’ve liked Taylor Kitsch as an actor since seeing him in The Covenant so I was curious to see him in this. I can’t explain what attracted me to it, just various elements that seemed intriguing and I did enjoy it. Is it the best film ever? No, but I tend to like films on whether I enjoy them. I was honestly surprised to see that Rihanna can actually act, and wasn’t just there as a token character. The film includes other actors such as Alexander Skarsgård, Liam Neeson and Brooklyn Decker and has some touching moments regarding Pearl Harbour and Veterans. Over all it’s a fun sci fi romp.

I’ll start by saying that I am not a huge Tom Cruise fan, never have been, and after the whole Scientology thing my interest him declined further. I tend to avoid his movies unless something else interests me about them, in this case it was his co-star Emily Blunt who I always enjoy in films. This is a very complex and emotional sci fi film, and it does hit right to the heart at several points. I like the ideas behind the aliens and the concepts, it’s very clever and for that alone worth a watch. Plus, there is something highly amusing with watching Tom Cruise get killed over and over again. Emily Blunt is on top form as a tough takes-no-prisoners female soldier.

Teenage Mutant Ninja Turtles: Out of the Shadows

I LOVE these remakes. The first film was amazing and the second was great too. I grew up with TMNT and I can’t put into words how spot on these films have got it. I like Megan Fox as April, and as an Arrow fan it was fantastic to see Stephen Amell as Casey Jones. These films are a great homage to part of my childhood and can’t wait for more.

As part of my 2017 geeky goals I’m trying to watch films by certain actors and Harrison Ford is one of those. I’m a big fan of him but there’s some gaps in my watch list. Liam Hemsworth plays the lead character alongside Harrison Ford and Gary Oldman as big corporate enemies, with Amber Heard as a sassy love interest. All give fantastic performances, but the older cast outshines the younger one massively. Gary Oldman and Harrison Ford are on top form and are damn right scary at times.

Don’t watch this film if you’re wanting something as background noise. It’s a mind bender and a half! The premise of the film is to ask the question of what would happen if a human could use 100% of their brain. Insert a lot of philosophy, science and special effects. It was an enjoyable watch which left me with many questions.

An older film that I’ve had my eye on since it’s release, we picked it up in a charity shop last summer. Like Lucy there are some head hurting moments, and a whole lot of heart wrenching ones too. It’s an action thriller with Denzel Washington, Val Kilmer and the delightful Paula Patton.

I’ll start off by saying that I’ve not read any of the comics, and so my knowledge of many of these characters were limited. I know Deadshot from Arrow, and Harley from well… who doesn’t know Harley Quinn?! The Joker was probably the only character I’d say I know relatively well. I really enjoyed it. Yes, it got totally trashed by fans and critics alike but I liked it. I wasn’t sure about Will Smith as Deadshot, but as the story unfolded I found that he was a good fit for the role. I totally did NOT recognise Jai Courtney as Captain Boomerang, was pleasantly surprised by Cara Delevingne and may be just a little bit in love with Margot Robbie 😛 I liked the introduction to the bad guys using the DC heroes, and the tiny snapshot of The Flash made me wonder if Ezra Miller might not be so bad.

I was ready to love this, ready to have the feminist in me applaud it… and it failed miserably. It tried too hard to be wacky, and there were just so many stupid moments. I don’t do stupid funny. I do witty funny. It was hilarious at points, don’t get me wrong, but when you’re watching an all female led movie and you think the male co-star was the best? Yeah something went very wrong there. Chris Hemsworth stole the show, not because he was a guy, just because he was the better actor. I loved the cameos from the original actors more than anything. Sorry, originals 1, reboot 0.

I’m not a Jungle Book fan, never have been. I love Disney and I can’t even remember the Jungle Book movie apart from 1-2 songs (the second I remembered during this film). After watching this I’m still not a big fan, however, this film isn’t about the Jungle Book story. It’s about the acting of the super talented 13 year old kid, Neel Sethi, who plays Mowgli. I had to check out how it was made after watching it, and the whole thing is CGI. Award winning actors voiced the animal characters, but they didn’t crawl around on all fours for the kid to act alongside. He had props and people in the CGI get up to bounce off, but still, that is amazing for a guy his age. I can’t wait to see him grow into an even more amazing actor. And oh my, the CGI. It is incredible. Really beautiful and so detailed.

If you love buddy cop movies like Beverly Hills Cop, Lethal Weapon and Rush Hour you will LOVE this. I have not laughed so hard at a movie in so long. It was brilliant, and Dwayne Johnson wearing a unicorn t-shirt and a fanny pack? Oh my. It is not to be missed. The movie is based on a former bully victim (Dwayne Johnson) who grows up to be a kickass CIA agent, and ropes in someone from his old high school in a thrilling espionage mess. Yes, mess. Kevin Hart plays the other part of this duo and the chemistry is hilarious. Seriously, go watch it.

The Legends of Tarzan

After watching Suicide Squad and Battleship this moved up my list as I wanted to see more Margot Robbie and Alexander Skarsgård. Unlike most Tarzan films, this picks up AFTER meeting Jane and leaving the Jungle – which I was very glad about because the whole Tarzan meets Jane thing has been so overdone. Tarzan, now Lord John, heads back to the Jungle with Jane and gets into a load of trouble. The plot is predictable, however, it has some great acting and the animal scenes are amazing and poignant. Samuel L Jackson is in there as a gun-totting American who provides some comic relief, and overall it is a very beautiful and fun film. As an animal lover though it is the scenes watching Tarzan meeting his animal friends again and rekindling those relationships that stole my heart.

Have you seen any of these? What did you think? I’m taking movie recommendations, especially any available on UK Netflix and Amazon Prime so let me know you’re suggestions <3