Too Near the Dead by Helen Grant Book Review 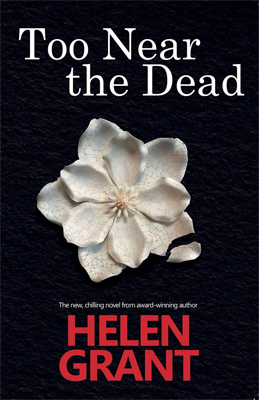 Category: Book Reviews
Author: Helen Grant
Genres: Horror, British, Ghosts, Mystery, Paranormal, Thriller
Page Count: 296
Publisher: Fledgling Press
Sometimes it’s terrifying, loving someone this much… For Fen Munro and her fiancé James, it is a dream come true: an escape from London to a beautiful house in the stunning Perthshire countryside. Barr Dubh is modern, a building with no past at all. But someone walks the grounds, always dressed in lavender. Under a lichenous stone in an abandoned graveyard, a hideous secret lies buried. And at night, Fen is tormented by horrifying dreams. Someone wants Fen’s happiness, and nothing is going to stop them—not even death…

This book was provided for free by the author in exchange for an honest review. Many thanks to NetGalley and

There are quite a few disturbing scenes in this book. There are scenes of being buried alive, of being trapped in a dead body, of being in a body and being unable to move, and other scenes of a violent nature.

I’m still not sure what it is about Too Near the Dead that drew me in.  When the review request arrived in my inbox I looked it over, pondering it and then kept coming back to it until I had to finally admit that I wasn’t sure whether I would like the book, but there was something about the synopsis that was nagging at me. The synopsis suggests a book that could be pure horror, perhaps a paranormal story or just a plain old thriller. I’m not sure whether Too Near the Dead is going to end up being contemporary fiction, or something that is very much my type of story. And yet there I was going back to it again and again until I had to admit that I needed to know what happens in Too Near the Dead.

Does the book hold up to that standard? Let’s find out.

The answer, as you can see from my rating, is yes; the calibre of writing in Too Near the Dead held up nicely. Grant whisks the reader away to a remote area of Perthshire for a ghost story that will chill you to your bones – and that is coming from someone who does not get chilled to the bones. I have read many horror books and some really odd and weird horror stories in my time, and very rarely do I find myself getting freaked out. However, one night when I was home alone, and I was reading Too Near the Dead I realised very suddenly that I was home, alone, in Scotland on a cold autumn night with just a cat to keep me company. Let’s just say I’m glad that I live in a town near Glasgow and not out in a more rural part of Scotland…

Too Near the Dead is a nice mixture of genres that will appeal to a variety of readers. For me, a horror and fantasy fan, there was just the right blend of the supernatural and horror elements with contemporary fiction to keep me hooked. Likewise, this is very much a thriller and a whodunnit mystery that spans a few hundred years. Mix in local history and urban legends, and you’re beginning to get a feeling of what Too Near the Dead is like. It’s all held together by Grant’s wonderful storytelling, which is so good that I was several chapters into the book before I realised it was in present tense, something I normally hate and find quite difficult to read. I had zero issue with it in Too Near the Dead.

Fen was a brilliantly genuine protagonist who I appreciated for not being overdramatic, and the same could be said for her fiancé James and the other supporting characters. There is a scene in Too Near the Dead where Fen and James have to deal with a major relationship issue, and in most books it would have become the biggest drama fest in the world. Instead, after the initial argument, they talked about it like the mature adults they were. It didn’t go on for days or end up growing into a huge thing. It’s one of the few times I’ve seen a couple argue in a book and felt like a real life couple was actually being represented. I also really enjoyed the glimpses into the world of publishing and editing offered by Grant through the eyes of her characters. The level of detail given to Fen and James’ history made the story much more interesting and helped me connect with them easier as a reader.

Too Near the Dead is one of those books that teaches you to step outside your comfort zone from time to time because you will find a hidden gem. I certainly did with this one, although I won’t be making the mistake of reading something by Helen Grant while home alone again! If you’re looking for a spooky read in the run-up to Halloween, then this is a great one to get you in the mood.

Helen Grant (born 1964 in London) is an author of novels for young adults, now based in Scotland. Her first novel, The Vanishing of Katharina Linden, was published by Penguin Books in April 2009.[1] It was shortlisted for the Booktrust Teenage Prize and the CILIP Carnegie Medal. It has also been published in Germany as Die Mädchen des Todes, and has been published in Spain, Holland and the US.
Her second novel, The Glass Demon, was published by Penguin in May 2010. It was shortlisted for the ITW Awards Best Paperback Original category. Her third novel Wish Me Dead was published in 2011 and nominated for the CILIP Carnegie Medal.
In addition to her novels for young adults, she has been a regular contributor to the M.R. James Ghosts & Scholars Newsletter. Her short fiction and non fiction have been published in Supernatural Tales, All Hallows and by the Ash Tree Press. She has also provided a new translation of E.T.A. Hoffmann’s Das Öde Haus in The Sandman & Other Night Pieces (Tartarus Press).
Helen’s most recent novels are Silent Saturday (2013), Demons of Ghent (2014) and Urban Legends (2015), which form a trilogy of urbex-themed thrillers.
In 2018 Helen’s new novel, Ghost, will be published by Fledgling Press. Ghost is the first of Helen’s books to be set in Scotland.

Interested in more books by Helen Grant? Check out a selection of titles in my store.

Thanks for reading my review for Too Near the Dead by Helen Grant! What was the last spooky book you read? Let me know in the comments 🙂

You can check out many other great books on Kindle Unlimited. Sign up today and get three months free!