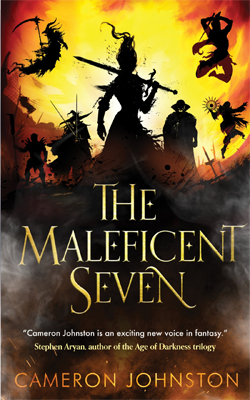 Category: Book Reviews
Author: Cameron Johnston
Genres: Fantasy, Adventure, British, Magic, Necromancer, Pirates, Vampires, Villains
Page Count: 400
Publisher: Angry Robot
When you are all out of heroes, all that's left are the villains. Black Herran was a dread demonologist, and the most ruthless general in all Essoran. She assembled the six most fearsome warriors to captain her armies: a necromancer, a vampire lord, a demigod, an orcish warleader, a pirate queen, and a twisted alchemist. Together they brought the whole continent to its knees... Until the day she abandoned her army, on the eve of total victory. 40 years later, she must bring her former captains back together for one final stand, in the small town of Tarnbrooke - the last bastion against a fanatical new enemy tearing through the land, intent on finishing the job Black Herran started years before. Seven bloodthirsty monsters. One town. Their last hope.

When you are all out of heroes, all that’s left are the villains.

This book was provided for free by NetGalley in exchange for an honest review. Many thanks to NetGalley and Angry Robot for the opportunity to review The Maleficent Seven.

There is a huge amount of violence in this book as you would expect from a book about a group of villains. There are also experiments on animals, creatures and humans courtesy of the alchemist character that are quite horrific. That being said this isn’t a horror novel, it is a fantasy novel and there is a war between two factions. The battle scenes are as bloody as you would expect from that situation.

I can’t think of many books where the villains are the main characters, and most of the time when they do the story is always about redemption. The synopsis of The Maleficent Seven does not read like a redemption story to me. I’m intrigued to find out what happened 40 years before to make a ruthless general on the eve of victory just walk away. And what has happened to her seven captains in those 40 years? I’m just imagining how I would feel if I followed someone into battle and they just disappeared without warning. The amount of chaos that was left in her wake, never mind the feelings of betrayal, anger and so on. What brings them back together?

There’s so many questions, so much intrigue and adventure to be had in this book. Then there’s the seven themselves; a necromancer, a vampire lord, a demigod, an orcish warleader, a pirate queen, and a twisted alchemist. Normally an army is made up of one or a few factions, but here are seven completely different and completely unique creatures. Not to mention that Black Herran, their general, is a demonologist?! That’s a whole lot of power coming together to beat “a fanatical new enemy” which begs the question; just who is this new enemy and how powerful are they that seven of the land’s most bloodthirsty monsters are needed to beat it?

This novel is either going to be exceptionally epic or terrible.

The Maleficent Seven is without a doubt one of the most fun fantasy novels I have read in a while. On the one hand, it doesn’t take itself too seriously, and on the other, it deals with some very serious issues. Without giving too much away, the enemy that is descending on Tarnbrooke is a zealous religious cult. Popping up after Black Herran disappeared, this new Empire has taken over the kingdoms bit by bit slowly erasing the old ways and with it the old gods. As with most fantasy worlds, the old ways and the old gods are the ones that people with magic, and those who have other gifts, lean towards. This new enemy tries to paint themselves as the good guys, however, they’re oppressors who make it violently clear that it is their way or off a high cliff with you.

That is where our merry band of villains come in. Wronged, vengeful, angry and some of them wanting to know where the hell their former General has been and what the bloody hell she thought she was playing at 40 years ago, they’ve banded together again to stop this Empire with each of them having their personal reasons to do so. Most of them don’t like each other very much, at the most some of them tolerate each other – but they all need each other to get the job done. They also all agree that this new Empire needs to be stopped at Tarnbrooke. They don’t give a monkies about why it has to be this town, they just understand the need for a strategic point to draw the line for battle.

I fell in love with all of the characters, save for one of them who truly is a horrific monster, and Johnston has done a fantastic job of subverting the ideologies of good and evil. These aren’t anti-heroes; there is nothing grey about them. In a panel hosted by Glasgow in 2024, alongside Stephen Aryan, Johnston spoke about writing one of the characters and his struggle to even remind himself that the character was a complete bastard. He found himself beginning to like the man, then would need to remind himself that no, this man had done truly awful things and wasn’t looking for redemption. Looking back at the book I can see that tactic in action because I remember feeling the exact same way then that character, and many of the others, would do something that reminded me, nope these are the bad guys.

It was really refreshing to read a novel where the bad guys were unrepentant and unapologetically themselves. They didn’t cower from the townspeople they were trying to help, they didn’t try to fit in. They had a job to do and they knew that what made them monsters was what made them the only ones able to do the job. Too often authors feel the need to make their characters turn good, to have a heart of gold hidden beneath their monstrous exteriors. They’re just “misunderstood”. If that’s what you’re looking for then The Maleficent Seven is not the book for you.

The end is absolute perfection and had me howling with laughter. The only thing I dislike about The Maleficent Seven? It is sadly a standalone novel. In the same panel, I asked Johnston if he ever intended to go back to the universe of The Maleficent Seven and he confirmed that it was a standalone novel. I agree that it works perfectly as one, I’m just sad not to see these wonderful characters again. The host suggested that maybe he could return for a short story one day so I’m guessing I’m not the only one who felt that way 😉

The Maleficent Seven is unlike anything you will read this year. Even if you think you’ve read a book about villains, I can assure you that you’ve not read one like this. The cast of characters is so diverse, so full of charisma and the world-building is incredible. While there are religious elements in the form of the Empire they are facing this is not a religious fantasy novel, in my opinion. It’s an adventure, a reunion of seven monsters and like any reunion, it goes off with a bang.

Cameron Johnston is a Scottish writer of fantasy and horror and lives in the city of Glasgow in Scotland. He is a student of Historical European Martial Arts, a member of the Glasgow Science Fiction Writers’ Circle, and enjoys exploring ancient sites and camping out under the stars (when Scottish weather allows).

Interested in more books by Cameron Johnston? Check out a selection of titles in my store.

Thanks for joining me for my review of The Maleficent Seven! If you enjoyed this review why not check out some of my other reviews?

The Maleficent Seven is due out on the 10th of August 2021! You can Pre-Order it now!

What do you think of a book centred around villains instead of heroes?

You can listen to Cameron’s The Age of Tyranny duology on audiobook over on Scribd the world’s original online reading subscription service. You can sign up using my referral code and get 2 months of free reading right now!