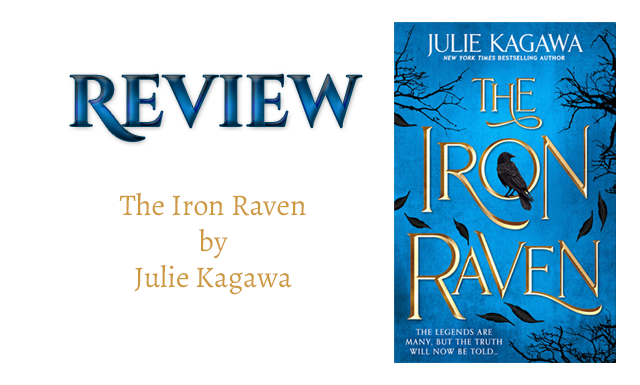 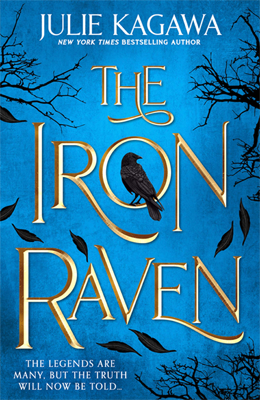 Category: Book Reviews
Author: Julie Kagawa
Genres: Fae/Fey, Fantasy, Young Adult
Series: The Iron Fey: Evenfall
Series Number: 1
Page Count: 336
Publisher: HQ Young Adult
You may have heard of me... Robin Goodfellow. Puck. Prankster, joker, raven, fool… King Oberon’s right-hand jester from A Midsummer Night’s Dream. The legends are many, but the truth will now be known as never before, as Puck finally tells his own story and faces a threat to the lands of Faery and the human world unlike any before. With the Iron Queen Meghan Chase and her prince consort, Puck’s longtime rival Ash, and allies old and new by his side, Puck begins a fantastical and dangerous adventure not to be missed or forgotten.

Many years ago I picked up The Iron King at the library and fell in love with a unique series about Fey. I was very excited to hear that Julie Kagawa had returned to The Iron Fey universe and was thrilled to get my hands on an ARC for The Iron Raven! This book was provided for free by NetGalley in exchange for an honest review. Many thanks to NetGalley and HarperCollins UK for my copy.

What drew me to this book was most certainly not Puck. I read the original Iron Fey series about 6 years ago and fell in love with the characters and the world created by Julie Kagawa. While many people saw this as an attempt for the author to make more money, I was glad that a publisher had offered Julie Kagawa a chance to return to the Nevernever and continue the stories of characters I loved. So many authors don’t get the chance to do that. But yes, I never saw the appeal of Puck. I found him childish and tedious, and his attachment to Megan was not sweet; it was toxic.

However, the thought of returning to the land of the Iron Fey is more powerful than my dislike of Puck even if he is the main character of The Iron Raven. The summary clearly mentions that he’ll be joining back up with Megan, Ash and other characters from the original novels which I’m looking forward to as well. Maybe he’ll end up growing on me, maybe he won’t. Either way, I’m ready to head back into the realms of the Fey for another set of adventures.

The Iron Raven was everything I hoped it would be and more. You might be wondering why I’ve given it a stingy 3.5 stars then. It’s not that it didn’t live up to the originals, it’s because while it’s a very promising start, The Iron Raven is still just a start. It offers a lot more to come, introducing new characters and as you’d expect a new big bad as a new adventure in the Nevernever unfolds. The problem with books like The Iron Raven is that it’s got to build upon the previous novels while introducing something new, and in this particular case, offer up the real story of Robin Goodfellow on a plate.

Julie Kagawa does this very well, intertwining Puck’s flashbacks with the current storyline and showing us how he came to be the legendary Fey everyone in the Nevernever knows. As we see Puck throw head first into this new adventure, we get to see sides of him that were missing from the original Iron Fey series. It isn’t just reading things from Puck’s perspective and seeing another side to his pranks and joker personality, it’s getting the opportunity to see him before everything begins. The moment when he’s just Puck, doing what he does every day. We get to see how the pressure of suddenly being thrust back into the thick of it affects him, how the past still weighs on his mind, and gradually over the course of the novel my opinion of Puck changed.

If you’re expecting this to be the same as the good old days then sorry to disappoint, but this is set after the original series and a Fey Queen can’t just abandon her court for a long period of time. I’ll leave it at that. There are plenty of good moments with the old crew, however, and the new characters that join them more than makeup for this not being Iron Fey 2.0. Personally, I don’t want a complete copy of the original series. I want something new and The Iron Raven most definitely has that in spades. I also feel that it is giving two of the most underutilized characters of the original series, Puck and another one (spoilers 😉 ), a chance to shine.

As the cover says; the legends are many but the truth will now be told and that is one of the most accurate tag lines I’ve seen in a while. The Iron Raven is an emotional rollercoaster and not in the ways you were expecting. You’ll have all the feels for returning to the Nevernever, to hearing Grimalkin’s sass and those moments where familiar characters enter for the first time. There are plenty of moments where you’ll laugh until you cry too, this is a novel with Puck as the protagonist after all. I’m looking forward to seeing where the rest of this series goes and hope there are more Puck and Grimalkin banter moments in the next book because there are the absolute best.

Julie Kagawa, the New York Times bestselling author of the Iron Fey, Blood of Eden, Talon, and Shadow of the Fox series was born in Sacramento, California. But nothing exciting really happened to her there. So, at the age of nine she and her family moved to Hawaii, which she soon discovered was inhabited by large carnivorous insects, colonies of house geckos, and frequent hurricanes. She spent much of her time in the ocean, when she wasn’t getting chased out of it by reef sharks, jellyfish, and the odd eel.
When not swimming for her life, Julie immersed herself in books, often to the chagrin of her schoolteachers, who would find she hid novels behind her Math textbooks during class. Her love of reading led her to pen some very dark and gruesome stories, complete with colored illustrations, to shock her hapless teachers. The gory tales faded with time, but the passion for writing remained, long after she graduated and was supposed to get a real job.
To pay the rent, Julie worked in different bookstores over the years, but discovered the managers frowned upon her reading the books she was supposed to be shelving. So she turned to her other passion: training animals. She worked as a professional dogtrainer for several years, dodging Chihuahua bites and overly enthusiastic Labradors, until her first book sold and she stopped training to write full time.
Julie now lives in North Carolina with her husband, two obnoxious cats, and a pair of Australian Shepherds that have more Instagram followers than she does.

Interested in more books by Julie Kagawa? Check out a selection of titles in my store. You can find the other books in the Iron Fey series here!

Thanks for reading my review for the brand new Iron Fey book by Julie Kagawa, The Iron Raven which is book one in The Iron Fey: Evenfall series. I am super excited to see where this series goes and I hope you’ll join me on this journey as I find out!

Have you read the Iron Fey series? Do you plan on checking out The Iron Raven?

For The Iron Fey series and more of Julie Kagawa’s books check out Scribd the world’s original online reading subscription service. You can sign up using my referral code and get 2 months of free reading right now!