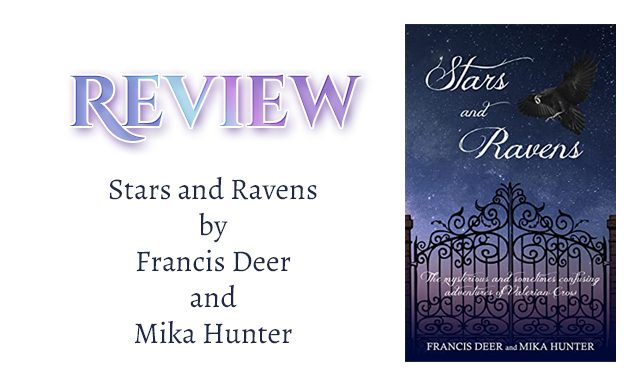 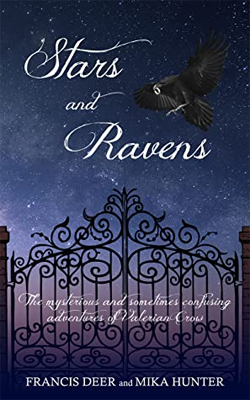 Category: Book Reviews
Authors: Francis Deer, Mika Hunter
Genres: Fantasy, Adventure, Camaraderie, Elves, LGBTQ+, Magic, Mystery, Quests
Series: Valerian Crow
Series Number: 1
Page Count: 687
Publisher: Independently published
Investigating a murder case, Valerian Crow is drawn into a mystery discernible only to him due to his unwanted magical abilities. Joining forces with unlikely companions, he finds himself increasingly entangled in enigmatic events. When Valerian accepts work from strange employers, magic is more and more invading his world and endangering his hold on reality. In the course of events, he has to decide whom to trust and learn to rely on others. A challenging task, even more so since all his life Valerian has been forced to lock certain parts of himself away and thus never deciphered the ways of his own heart.

Stars and Ravens: The Mysterious and Sometimes Confusing Adventures of Valerian Crow was provided for free by the authors in exchange for an honest review.

Please note; I have gone into a little more detail than I normally would in a review about some of the characters in the book, namely the two companions named in the book synopsis. I feel that this is needed to discuss the book properly. However, some people may not want this to be spoiled for them so please consider this a warning. It is a very minor spoiler as you meet this characters within the first few pages of the book.

There are some scenes of death, murder, moderate violence, and a whipping scene.

Stars and Ravens is a book that seems to have a bit of everything I like in a book. I love mysteries and whodunnits, and while I love to watch crime TV shows, for books I need a mystery wrapped up in fantasy, supernatural or science fiction elements. It seems that Stars and Ravens has just that! Throw in some “unlikely companions” and “strange employers” and I’m even more curious. How do we get from a murder investigation to a challenging task which seems to have the ability to completely change Valerian’s life? Or at least turn it upside down.

I’m interested to learn more about what magic has to do with it and how it relates to him. Is this a coming of age type story where he is just finding out he has magic? Or perhaps one of the things he has kept locked away is his magic. Lots of things have caught my attention with this one and I’m looking forward to learning more about Mr Valerian Crow and his companions!

Well, the tagline for a book has never been truer! When I started writing this review I struggled to find the words to describe this novel because it is a unique delight. It’s as if someone was baking a cake and used book genres and fantasy elements instead. Throw in a handful of adventure, a pinch of epic journeys, a spoonful of quests, essence of roleplay, a sprig of mystery and a good helping of camaraderie and you’ll come close to the cake book that is Stars and Ravens.

Those who have read some of my previous reviews will know that I’m not a big fan of long books that take a long time getting to the point or go on long journeys. I’ll admit that at times Stars and Ravens tested that part of my patience, however, where other novels have failed Deer and Hunter have a wonderful ability to draw the reader back into the story. Just as my mind was beginning to wander, to think “ok, this is going on a bit too long now…” up popped a new plot point, a twist in the mysterious and confusing adventures that are Valerian Crow’s life.

And what a set of adventures it is. After the initial murder investigation mentioned in the synopsis, Valerian ends up journeying with two companions; a human male called Taran and a female dwarf called Lif. Taran and Lif have been adventuring for several years together. Lif is a warrior, and Taran, well Taran is a thief and a lover of women. You’re probably thinking at this point, oh no, not another misogynistic pig. At times Taran can be a bit… naive, however, he’s actually just a big loveable fellow. He loves women of all ages, and although he loves them and leaves them, it appears he does so without any upset. They just wait for him to pop by their way again. He doesn’t win over every woman, of course, and I’ll let you discover that for yourself.

As for Lif, she is nothing like Taran. She disapproves of his lifestyle completed, as a thief and his way with women, yet is loyal to a fault. She also has a beard which I thought was wonderful. A lot of detail has gone into the world-building of the universe of Stars and Ravens, with Dwarves, Elves and creatures of the night living alongside humans, and there is a vast belief system for each land and race as well. Each character, even the minor ones, are so well rounded with shortcomings and strengths. None of them are perfect, and those that appear perfect soon enough show their flaws. Stars and Ravens builds the groundwork for an M/M relationship which will grow in the course of the series. It is a slow burn, and is beautiful to watch as the characters learn more about themselves and each other.

The magic system is unlike anything I have ever seen, and it’s fascinating how deep the two authors have gone with their visualisation of magic. Normally you get a brief description of what it looks like, a colour and maybe a small or temperature. In Stars and Ravens, it is a fully immersive surround-sound experience. I mentioned that one of the “ingredients” was roleplaying and I think what separates this book from other fantasy novels I’ve read is the element of oral storytelling that has been weaved into the narrative. I felt like I was being told a story by someone, not that I was reading a story. This is quite a significant achievement considering the book is not written in the first person.

The book ends on a huge cliffhanger that I did not see coming. I flipped the page and was gobsmacked that there was no more. I think I may have even flicked it back to check that I’d not missed a page! It was an epic ending, and while I’d had my suspicions all along I still didn’t see all of that coming. Deer and Hunter did extremely well to mask the true intentions of the story right up until the end.

Stars and Ravens falls just short of a five out of five stars rating simply because it didn’t quite hit the spot for me personally. Fans of tabletop roleplaying and epic fantasy sagas will love this epic fantasy novel filled with quests and camaraderie. Mystery fans will, like me, be enthralled by the ongoing investigations as the group try to puzzle out what is really going on, who their mystery employers are and what the tasks they give them have to do with anything. Deer and Hunter offer a rich fantasy tale utilising a unique storytelling technique not to be missed by fantasy fans.

Francis Deer and Mika Hunter have been friends for over 30 years, at one point deciding to join forces and become co-authors. They both live in Munich with their respective families: two husbands, two girls, two boys, two cats and the occasional nest of hornets.

Francis Deer holds diplomas in theology and adult educational science. Currently, she works as a software tester for an IT company. In addition, Francis trained as a baby-wearing consultant and runs her own small business. Over the years, she acted in various theatre groups, always striving for the romance part yet ultimately ending with the comedy role. Francis is an avid collector of tarot cards as they offer an intriguing mix of beautiful artwork and rich symbolism.

Mika Hunter studied foreign languages in Germany and France. After her exams, she went on to work for a European patent and trademark attorney firm. She spent several years in Sweden, where she helped to run a shop for children’s clothes. Mika leads a fantasy role-playing game, enjoying to surprise her players with intricate plots. She loves writing sonnets and drawing everything from birthday cards to stage backdrops for children’s theatre plays. She enjoys a variety of music, among her favourites Italian opera as well as Finnish rock and heavy metal.

Francis and Mika do not currently have a website for updates you can follow their Amazon Author pages; Francis and Mika. You can also find out more about their work in an interview at The Fantasy Hive. You can browse their books on Goodreads; Francis & Mika. Or connect with them on Twitter; Francis and Mika!

Thanks for reading my review for Stars and Ravens: The Mysterious and Sometimes Confusing Adventures of Valerian Crow!

Does Stars and Ravens sound interesting to you?

You can check out Stars and Ravens for yourself on Kindle Unlimited. Sign up today and get three months free!