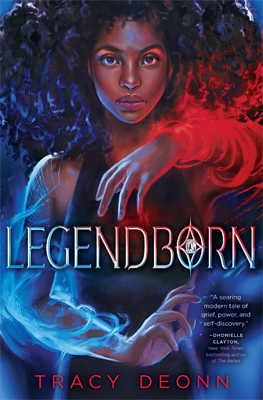 Category: Personal Book Reviews
Author: Tracy Deonn
Genres: Mythology, Arthurian, BIPOC, Fantasy, LGBTQ+, Young Adult
Series: Legendborn
Series Number: 1
Page Count: 512
Publisher: Simon & Schuster Children's UK
After her mother dies in an accident, sixteen-year-old Bree Matthews wants to escape. A residential programme for bright high-schoolers seems like the perfect opportunity – until she witnesses a magical attack her very first night on campus . . . A flying demon feeding on human energies. A secret society of so-called “Legendborn” that hunt the creatures down. A mysterious mage who calls himself a “Merlin” and who attempts – and fails – to wipe Bree’s memory of everything she saw. The mage’s failure unlocks Bree’s own unique magic and a buried memory about her mother. Now Bree will do whatever it takes to discover the truth, even infiltrate the Legendborn. But when the Legendborn reveal themselves as the descendants of King Arthur’s knights and foretell a magical war, Bree must decide how far she’ll go for the truth. Should she use her magic to take the society down – or join the fight?

The author of Legendborn, Tracy Deonn, lists the following content warnings on her website for the novel (I’m quoting directly from her list here because I don’t think I can say it better than the author herself).:

It’s taken me a long time to find the words to write this review because Legendborn is not just a fantastically written novel, it’s an important novel. There are some novels that you read that just stand out from the crowd, and for me, Legendborn is one of them. You might be thinking, oh yeah, here’s another white girl jumping on the Black Lives Matter bandwagon. I’m not just British, I’m a Londoner and that means something, at least to me. People of colour make up a good percentage of London’s population and unfortunately while racists do exist there (and are on the rise again), most of us have grown up alongside people of colour. They’re our friends, our neighbours, they are our teachers, etc.

So reading a novel like Legendborn set in the US, and particularly in a part of the US where racism is rife, isn’t just a massive culture shock, it’s sickening. In a way, it was also educating because as a disabled bisexual pagan I’ve had to deal with my fair share of prejudice and yet there were things I hadn’t even considered that black people might notice or feel. For example, the feeling of being unwelcome in historical buildings because they were built for white people. That one completely floored me. I also understood it because when I walk into old churches and cathedrals I feel like an imposter as a pagan. I feel a little uncomfortable and a small part of me expects someone to turn to me saying “thou shalt not suffer a witch to live”. However unlikely that sounds some extremely devout men still do say that to women with bright coloured hair, tattoos and piercings in the UK. Any discomfort I may feel in a religious building is due to my religion not because the building was designed for me to never enter. In fact, it was designed exactly with people like me (“heretics”) in mind. I can’t even begin to comprehend the visual monument of being unaccepted and unwanted that these buildings represent to the black community.

That is just one example of how in-depth and personal Legendborn gets with racism. I’m probably making it sound like this book isn’t a fantasy novel at all, however, Tracy Deonn expertly weaves Bree’s racial identity and the racism she encounters with the main plot of the novel. As Bree looks for answers about the magic she’s witnessed has to contend with a secret society that is predominantly white, and when she has to infiltrate it to find out more she has to contend with racism from multiple fronts.

Bree is also still struggling to come to terms with her mother’s death and when her father grows worried about her he signs her up for therapy. This leads her to new information about her mother and her extended family, and through the connection with her therapist, Deonn explores several main themes; Bree’s family, the history of racism in the US, and her struggle with grief. I was really impressed with how Deonn wove Bree’s grief and journey with her grief into the story. You didn’t feel like you were reading a novel about a girl who had lost her mom, just like you didn’t feel you were reading a book about a girl who struggled against racism; you were very much reading a fantasy novel based on Arthurian Legend.

It’s this ability that Deonn has to weave everything together so that it feels genuine that makes Legendborn so important. It’s a book that people can enjoy for the world-building and magic, but it’s also one where they can relate to Bree and her friends as well. Because life is messy, life isn’t split into these nice neat compartmentalized blocks where only one thing happens at a time or one person only has one thing to deal with. Ok, so most people aren’t going to be infiltrating a secret society of the Knights of the Round Table but they know what it’s like to say the wrong thing to their best friend and upset them.

On the topic of magic and world-building in the book, I’m not sure how much I can say without giving major spoilers. It’s one of the most unique takes on Arthurian legends I’ve seen. The synopsis explains that the Legendborn are descendants of King Arthur’s knights but there’s so much more to it, and like all magic systems there’s a drawback. By the end of the book, everything has been completely turned on its head and you won’t see it coming. Throw in an interesting and varied cast of characters and Legendborn is an amazing book that I really can’t recommend enough. Even better, it’s the first book of the series so there’s more to come!

You can read Legendborn and many other great books on Scribd the world’s original online reading subscription service right now! You can sign up using my referral code and get 2 months of free reading.