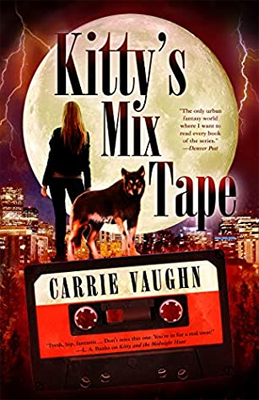 The most recent and final addition to the Kitty Norville series, Kitty’s Mix Tape is what prompted me to return to the series again. Nostalgic kicked in when I saw the book tours and interviews advertising for the book, and the next time I went looking for something to read I found myself first picking up Kitty’s Greatest Hits (read my review here) and next on the list was this one.

Unlike the other short story collection, this one was mostly fresh to me with the exception of one story that featured in the Urban Enemies anthology (review here). This time the stories focused more on Kitty and Ben and their escapades, including some short but fun stories where the author, Carrie Vaughn, clearly had fun pondering what happens to werewolves during supermoons, blue moons and all other sorts of moon phenomena. They were interjected between other stories intended to give the reader a giggle and they did just that!

As with the other anthology I was left with a deep desire for more. Two stories, in particular, stood out to me for showing the potential for a new series branding off from the Kitty Norville one that explored the wider supernatural world. These were The Island of Beasts which was set in England in the early 1800s and gives us a glimpse of how things were for werewolves in Britain at that time. It hints at various things and just made me want to know more. Then there is Sealskin which is a follow up to a story in the previous short story collection (The Temptation of Robin Green) which opens the doors to a whole new world of, as you can guess from the name, selkies and quite possibly even more. The original story with Robin Green included a variety of mythological creatures so there has already been a hint of what exists.

Overall Kitty’s Mix Tape is a good anthology and unlike the previous one, it serves as a good starter/sampler for people who are not familiar with the series as well as a goodbye to those of us who have finished it. The stories are entertained and varied, offering a full glimpse of what you can expect from the full Kitty Norville series. As with any short story collection, you are going to get some spoilers, and I can only think of one potential spoiler given in this anthology. Here it’s mentioned in passing whereas Kitty’s Greatest Hits has an entire novella devoted to it. Even then it’s not a series-ruining spoiler. So if you’ve heard things about this series and want to try it out then this might be a good way to do just that! 🙂

You can read Kitty’s Mix Tape and many other great books on Scribd the world’s original online reading subscription service right now! You can sign up using my referral code and get 2 months of free reading.