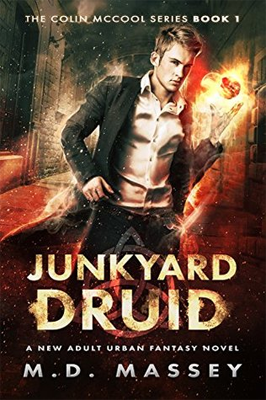 Category: Mini-Book Reviews
Author: M.D. Massey
Genres: Urban Fantasy, Fae/Fey
Series: Colin McCool Series
Series Number: 1
Page Count: 302
Publisher: Modern Digital Publishing
Name's Colin McCool. Folks call me the Junkyard Druid. I hate that name. Despite my last name, I'm not "cool" like the other hunters in town. I don't run an occult bookstore, I've never owned a Harley, and I didn't inherit a family fortune passed down through generations of hunters before me. And I kind of have this curse on me that's messed up my life. So, things have gone to hell since I was cursed. I live in a junkyard, my mentor Finn is a heroin addict, I've got the Cold Iron Circle breathing down my neck, and the local Fae Queen Maeve is blackmailing me into doing her dirty work. Now I'm in way over my head trying to retrieve Maeve's stolen magic rock, all while helping my friend Belladonna solve a series of murders that may or may not involve the local werewolves. And did I mention that my girlfriend is a ghost? If I can just get the Faery Queen's tathlum back, and help Belladonna solve the murders... Then I just might live long enough to finish my first year of college

This series deals very closely with the topic of grief, therapy and mental health (albeit, in my opinion not necessarily in a positive way). One of the character’s shelf harms and her scars are mentioned frequently, however, there are no scenes of self-harming. There is frequent drug and alcohol abuse as one character is an addict. Violence is frequent.

This series came highly recommended to me but it took me a while to pick up the first book because I was highly sceptical of how similar it sounded to Kevin Hearne’s Iron Druid Chronicles. I was right to be. Junkyard Druid is one of those books where you play spot the details ripped off from other urban fantasy series – and yes that is plural. I’ve seen other reviewers name Jim Butcher’s Dresden Files specifically, however, I noted along with the Iron Druid Chronicles that there were specific details ripped from Laurell K. Hamilton’s Anita Blake series and Patricia Briggs’ Mercy Thompson series regarding lycanthropes. Specifically how an Alpha can control another’s beast and the pack bonds. I’ve read a lot of urban fantasy in my time and while there is always a magical link between pack members I’ve only ever seen it called pack bonds and described in that way in the Mercy Thompson series. Every single one of these series began at least 5 years before Junkyard Druid was published, so it’s clear where M.D. Massey got his “ideas” from.

Even if I could overlook these issues (which I personally can’t; lack of originality and blatantly stealing is a real turn off for me), I had issues with the book in general. Let’s start with the fact that there’s a badass female hunter, Belladonna, who apparently can kick ass yet only hits one thing once and then, for the second time, has to turn to the protagonist, Colin, to save her. The same badass female who we’re told is extremely liberated and is actually at one point told she’s wearing clothes that would make a professional whore envious (and is not insulted by this), gets huffy over a biker gang of lycanthropes having some nudie calendars of women up. I’m sorry, what? It’s a biker gang. Of lycanthropes. Of course, they have naked pictures of women up on the wall.

You see, there are no female lycanthropes to complain because the pack doesn’t change women because “it’s too violent for them”. Yes, you read that correctly. Women who go through childbirth, one of the most painful experiences a person can go through, are deemed not able to handle the violence of a lycanthrope change by this author. It could just be bad wording, and what the author really means is that women rarely survive the transformation. In that case, this seems eerily similar to yet another urban fantasy series, namely Kelley Armstrong’s Women of the Otherworld series where Elena Michaels is the only known female werewolf to have survived the change.

The only other main female character other than Belladonna the femme fatale who flips her hair, drives her motorcycle and flirts constantly with the protagonist but never actually does any of the badass hunting she’s supposed to be so good at **, is Sabine, a fae, Colin met at his therapist’s office. I’m all for therapy and mental health featuring in fiction, what I really hate is when it’s just used as a plot tool and that’s exactly what happens in this book. We are told multiple times that she has cuts and has scars on her arms, we’re also constantly reminded that she uses a powerful glamour spell to hide and make herself look ugly. It’s so powerful that Colin has to use an earpiece so he doesn’t look like he’s talking to himself. But do we ever get Sabine’s story? Not really. We’re told what she is, as in what type of fae she is and what that means regarding her physical appearance (naturally why her boobs are a certain size and stuff like that), and how it’s led to her being teased about her appearance by the fae. But that is it. Why she cuts, and anything else is never ever discussed. She’s just there to be the damsel in distress.

** [NB: I’ve been informed by someone who’s read seven books of this series that Belladonna’s actions in the book are deliberate and part of a larger plot that plays out in future books. They also mentioned that the first book is exceptionally weak compared to the rest of the series. Personally, I have too many other books to read to check this out, but I thought it worth mentioning for anyone else who might be curious.]

The only thing I did find interesting was some of the NPCs, and they suggested to a much larger world that perhaps could be entertaining. But it was also not without its failures either; the author had evidently tried to reach for the heady heights of the witticisms and sarcasm that Jim Bitcher and Kevin Hearne excel at, and failed miserably. The book is promoted with the tagline “If you enjoy urban fantasy novels that feature snarky male protagonists then you’ll love this paranormal thrill ride with a twist of mystery and suspense” and maybe if you’re just interested in a light easy read and you’re not a picky reader then you’ll be able to sit back and enjoy this one. Personally, for me, there were just too many issues, too many things that I just kept coming back to and thinking ‘urgh, no I don’t like that…’.

If you want to check out Junkyard Druid for yourself it’s available to read for free on Kindle Unlimited. Sign up today and get three months free!