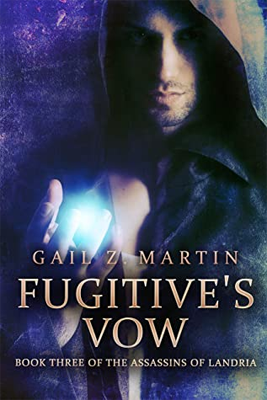 Category: Mini-Book Reviews
Author: Gail Z. Martin
Genres: Assassins, Adventure, Fantasy, Fast-Paced, Ghosts, Magic
Series: Assassins of Landria
Series Number: 3
Page Count: 204
Publisher: Ethan Ellenberg Literary Agency
Rule-breaking, unconventional assassins Joel “Ridge” Breckenridge and Garrett “Rett” Kennar are back, and the stakes have never been higher. The Witch Lord remains at large, orchestrating his plot against Landria’s throne from the shadows. Then tragedy strikes, the kingdom is in jeopardy, and Rett disappears. Framed for murder, Ridge flees with a bounty on his head, still intent on fighting the Witch Lord’s threat. Landria’s fate hangs in the balance, leaving only hard and dangerous choices. Can an unlikely alliance of outlaws and fugitives turn the tide for justice and vengeance?

There are some major torture scenes in this one using potions and poisons which lead to hallucinations. There is some discussion about the effect that the torture had had on the character, suggesting permanent damage such as brain damage or disability. There are no details given, it’s just implied. While the subject is treated respectfully and it is brief I wanted people to be aware that it’s in the book.

As this was the third book in the series I thought it might be the final book; I was very glad to find out that is not the case although now I am stuck waiting for the next one! Better than then it being finished as I am very much enjoying the adventures of Ridge, Rett, Henri and their growing band of merry allies. Another couple of allies are added in this book and we also learn more about Malachi and Kane who we met in Sellsword’s Oath. I certainly didn’t see that one coming! I had several theories in regards to Malachi’s identity and I was way off.

The action really ramps up in this one and for a while there it is touch and go, and this is the first time that I wondered if our two assassins were going to be able to pull off one of their unconventional plans. Things are getting more serious and even though this was as fast-paced as the other two books Martin’s clever writing made things slow right down, making you feel like you were stuck waiting for news right alongside the characters in the book. Based on where this one ended the next book is going to be a real page-turner and will be more explosive than any adventure Ridge and Rett and their allies have had before.

If you want to check out Fugitive’s Vow and the rest of the Assassin’s of Landria series for yourself it’s available to read for free on Kindle Unlimited. Sign up today and get three months free!