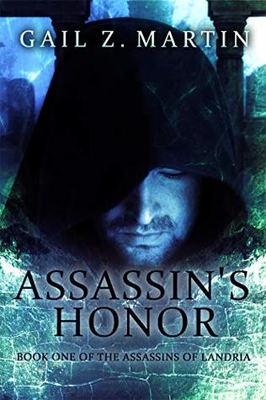 Category: Personal Book Reviews
Author: Gail Z. Martin
Genres: Assassins, Adventure, Fantasy, Fast-Paced, Ghosts, Magic
Series: Assassins of Landria
Series Number: 1
Page Count: 233
Publisher: Ethan Ellenberg Literary Agency
Friends since their orphanage childhood, Joel “Ridge” Breckinridge and Garrett “Rett” Kennard rose through the ranks of the Landrian army together, from teenaged conscripts to seasoned fighters. Together, they became the most feared team of assassins in Landria, surviving longer that most in their profession by virtue of excellent fighting skills, legendary bravado, peerless strategy, and an uncanny synchronicity. Henri, their long-suffering squire, tends to the thankless jobs of provisioning and logistics, while Ridge and Rett fight and recover. When wandering mystic Yefim Makary becomes the darling of disenchanted aristocrats, Rett and Ridge fear Makary—or the Witch Lord, as his followers call him—is a threat to the crown. As treasonous whispers spread, Ridge and Rett go rogue to stop the threat, save the kingdom and protect the king—while landing on the “Most Wanted” list themselves!

There is a recurring theme of child abuse and kidnapping, and other than a brief scene at the start of the novel that shows the after-effects of the abuse there is no explicit details. There is no sexual abuse.

As this is a book about assassins there is a lot of violence. I wouldn’t say it is overly gory, it could easily be much more so, but there is a lot of death and in various ways. There is also drug use, specifically opium and laudanum, and using these drugs to control others against their will.

I’ve been trying to get my hands on another Gail Z. Martin book ever since I finished the last book in the Chronicles of the Necromancer series, so when I found Assassin’s Honor on Kindle Unlimited it was the first book I read on my one month trial. I’m going to put it straight out there; it’s no Chronicles of the Necromancer – but that’s not to say it’s not good. As always Gail Z. Martin weaves a fantastic tale and considering how awesome Jonmarc was in that series, how could I not read an entire series dedicated to assassins?

We’re in a different land, however, there’s still hallmarks of Martin’s writing that fans of Chronicles of the Necromancer will recognise in this new series. Cocky but lovable rogues who don’t mean to get into trouble yet undoubtedly do, yet have a heart of gold and there’s magic linked to spirits again. Not anywhere near as complex as in the other series, but it’s clearly something that interests Martin.

Unlike Chronicles of the Necromancer and her other fantasy series The Ascendant Kingdoms (both 500+ pages), Martin purposefully wrote this new series to be a lot shorter (203 pages). There’s a note at the end of the book explaining that this is a fast-paced fantasy adventure for people who don’t want to hurt their wrists while reading. Personally, I love a good fantasy epic and I think the faster pace is where this book loses that little bit of magic that would make it as great as Chronicles of the Necromancer for me. It’s certainly got the chops to me as good, and the characters are fantastic. If you don’t fall in love with their squire then I’ll be shocked.

If you want to check out Assassin’s Honor for yourself it’s available to read for free on Kindle Unlimited. Sign up today and get three months free!