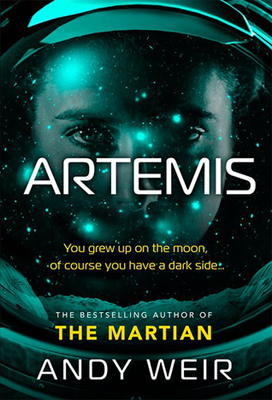 Category: Personal Book Reviews
Author: Andy Weir
Genres: Hard Science Fiction, Crime, Futuristic, Heist, Science Fiction, Space
Page Count: 320
Publisher: Del Rey
WELCOME TO ARTEMIS. The first city on the moon. Population 2,000. Mostly tourists. Some criminals. Jazz Bashara is one of the criminals. She lives in a poor area of Artemis and subsidises her work as a porter with smuggling contraband onto the moon. But it's not enough. So when she's offered the chance to make a lot of money she jumps at it. But though planning a crime in 1/6th gravity may be more fun, it's also a lot more dangerous. When you live on the moon, of course you have a dark side...

This book contains LGBTQ+ and racist slurs, flashbacks that refer to paedophilia and includes violent scenes.

I wanted to check out Andy Weir’s work and since The Martian didn’t interest me Artemis was the only other option available. It’s not my normal typical read; I like my science fiction to be less gritty and less realistic, and more adventurous and more science fiction. Artemis is based on what is very likely to be our future and has a lot of technical knowledge about how humans will live on the moon. In a way the level of detail about how everything works is fascinating, I’m nerdy enough to appreciate it, however, as one reviewer put it you will learn more about welding than you will ever need to know. Again, being a nerd and also the daughter of a mechanic and the grandaughter of a construction worker it didn’t bother me that much as I grew up around that kind of thing but I can definitely see the point.

I ended up enjoying the book because it’s not a bad book, but it’s definitely not my thing. The way I feel towards Artemis is the same way I feel towards books I read for university; I appreciate them on an academic level and they gave me some pleasure to read, but you probably won’t ever see me mention them again. I can appreciate the huge amount of research and thought that went into working out all the technical details of how this and that would work on the moon versus earth because of gravity, differences in air quality and so forth. I can also appreciate the magnitude of the economics that play out throughout the novel, but compared to world-building it just doesn’t compare for me. In a way it’s just another type of world-building, it’s just not my kind of world-building.

One thing I did like was the way the novel peeled back the layers of what happens when a new civilisation is formed. Weir doesn’t just look at the economical and criminal issues related to a new settlement connected to earth yet too far away for it to actually be maintained by earthen jurisdiction. He looks at the effect it’s had on the people, and through the life of the protagonist, Jazz, we see that the fantasy of living on the moon really isn’t all it’s cracked up to be. She goes through things in her young life that may not have happened if she’d been living on earth rather than the moon. But due to the lack of organised policing (the city of Artemis’ police system is literally just one man) and a real health care system (there’s not even a hospital, just a room where a doctor sees patients) Jazz was an easy victim and then got no help in dealing with the aftermath. That is the golden life of living on the moon. We’re all in such a hurry to get into space and start our futuristic civilisations, but no one’s actually really thought things through.

The one thing I really disliked about this book was some of the language choices. Firstly there was an ongoing theme of boobs and nipples throughout and comments about it. Not enough to be obsessive and it probably would have been fine if it hadn’t been for the commentary as if a female character couldn’t make a boob comment without making an immature masculine comment. It reminded me every time that it was written by a male author. Then there were the comments made to and by the gay male character who already fit into one gay stereotype, which for spoiler reasons I can’t mention. The bartender called him their favourite “a** bandit” and moments later the gay character asks the bartender for two beers; “one for the gay and one for the goy”. If you’re not aware “goy” has a complicated history and baggage of being used as a slur for a non-Jewish person in the past and its use is still highly debated now (read more about it here). I think the idea is meant to be that humans have gotten to the point in the future where these words are no longer offensive or people don’t get so offended, otherwise I don’t know what the author was thinking. The novel is set at least 60 years in the future (Star Trek and Star Wars are referred to as being 100 years old at one point), but personally I don’t see such a thing happening in 50 years or even 100. I think it’s more likely that as we’ve seen in our lifetime these words will be removed from our language not used more often so the choice to use them made me feel a bit uncomfortable.

You can read many great books on Scribd the world’s original online reading subscription service right now! You can sign up using my referral code and get 2 months of free reading.