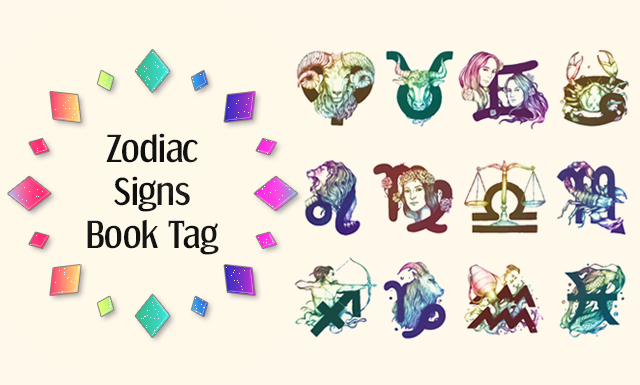 The Zodiac Signs Book tag was the winner of the second Blog Tag Game poll. As someone interested in Zodiac signs this blog tag was one that I was naturally curious about completing. The rules say to explain why a book matches each zodiac sign and I’ve done that by explaining how one of the main characters, usually the protagonist or narrator, fits that description.

The Zodiac Signs Book tag was created by audreywritesabroad.

The first character fitting this description that came to mind was Lydia Crow, the protagonist of the Crow Investigations series by Sarah Painter. In book 1 The Night Raven, Lydia moves back home to London to start her own business after a snafu at her previous job. As her family tries to draw her back into the family business Lydia stubbornly retains her independence.

Want to know more? Check out my review of The Night Raven here.

This description made me think of Mercy Thompson, the protagonist of the Patricia Briggs series of the same name. One of the most down to earth characters I know, Mercy is a coyote shapeshifter and a mechanic. She’s known for her stubbornness and continued to deliberately bait her werewolf neighbour by leaving dismantled cars on her lawn because it annoyed him.

This has to be Annabeth Chase from Rick Riordan’s Percy Jackson series and the follow-up series Heroes of Olympus. As a daughter of Athena, Annabeth has inherited her mother’s wisdom and strategy. She aims to win, pushing for success in everything she does. Despite being naturally attuned to knowledge Annabeth has a creative side, studying architecture and designing new buildings in her spare time.

Although Annabeth has been in all the books in both series, I always associate her with The House of Hades out of all of them.

Someone who is both admired and eccentric? That has to be wizard for hire Harry Dresden. While there’s many who don’t admire Dresden – many detest him in fact –  those who get to know him have grown to admire him and his unusual, “innovative” methods of getting things done. He’s made a lot of enemies over the years and he tries to keep his distance from people to keep them safe.

King of the Rogues and Spymaster, George Cooper from Tamora Pierce’s Tortall series fits this bill. The dynamic thief is a charmer and a jack of all trades. His love for playing games has always kept him one step ahead of the City Guard and his enemies, and keep his people safe.

We first meet Adrian in Richelle Mead’s Vampire Academy series, and he plays a larger role in the next series starting with Bloodlines. As a spirit user, Adrian’s moods fluctuate rapidly causing him to be indecisive. He is a charismatic person with an adventurous spirit that people are irresistibly drawn to.

This was the easiest one to answer; Phèdre nó Delaunay from Kushiel’s Dart by Jacqueline Carey. Phèdre is a member of the Court of Night Blooming Flowers and a courtesan by trade. A  free spirit she’s also sensual and sensitive, and both of these qualities have helped her multiple times during her many adventures.

Atticus from the Iron Druid Chronicles has been alive for thousands of years and has learned to forgive rather than hold grudges. Forgiving doesn’t mean forgetting though, and there’s a reason why he’s the only druid who survived the Roman purge. Druids are powerful adversaries and even better friends, and Atticus is always there for his friends.

It became obvious really early on in The Affinity Bridge that Veronica Hobbes was an independent young woman. Working in the male-dominated Victorian society she chafes at the restrictions she’s often placed under, including those of the wardrobe kind that often hinder her from fully exploring crime scenes. Equal parts brave and impulsive, Veronica’s desire to help people can lead to her into dangerous situations even if her heart is in the right place.

Jace from Cassandra Clare’s The Mortal Instruments Series was the first person who popped into my head for this sign. Popular and charming, Jace is faithful to a fault and will do anything for those he holds dear.

This one was a particularly tricky combination to find to match up until I remembered dear old Apollo aka Lester Papadopoulos. The god Apollo is punished by his father Zeus to roam the earth as the pimple-faced teenager Lester in The Hidden Oracle. As a god Apollo is an insensitive, open-minded self-centred jerk and he’s not that much different in human form, to be honest. However, over time it becomes evident that there’s more the god than the persona he projects to hide his real feelings and he is capable of caring about other people.

I had more trouble than I expected completing this one! I really need to start reading the questions through before I nominate Tags because the Zodiac descriptions in this one were really off. What made it so difficult to answer was that they were completely all over the place and the same attributes (creative, sensitive, insensitive) were repeated multiple times.

I’m tagging; Li, Heather, Jessica, Mariah, Mandi and anyone who wants to do it!