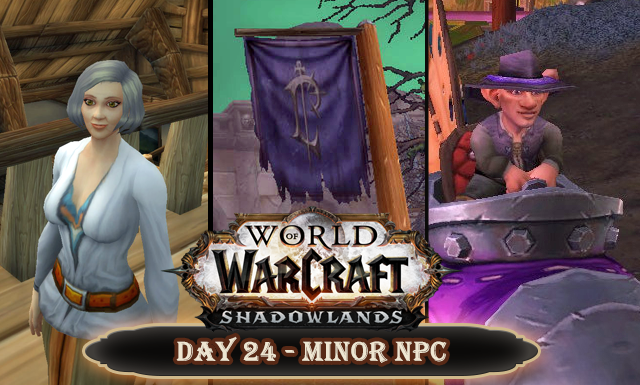 Hello everyone and welcome to day 24 of my 30 Day World of Warcraft Challenge that is counting down the days to the release of Shadowlands! Every day in November I will be posting about World of Warcraft based on the prompt list below. Today’s prompt is ‘minor NPC’ and I’m discussing three World of Warcraft NPCs that you need to know about.

For those who aren’t familiar with the term, NPC stands for Non-Played Character. Essentially all the characters I’ve been talking about in this challenge except the ones on the 1st day have all been NPCs. In every type of games NPCs are a necessity, they give players someone to interact with in a million different ways. Sometimes NPCs are really important characters whose actions affect the very fabric of the game, the ones in the middle who we as players spend a fair amount of time with but do not necessarily affect the game in massive ways.

Then there are the minor NPCs. We might only interact with them once or twice, sometimes never. We see them around, wandering the streets of the cities, selling us items. They’re not as invisible as one might imagine. While working on this post I came across this wholesome post on WoW Reddit which shows just how many minor NPCs stay in the hearts of players. Some of them fit into the game in ways you might not even realise and I’m going to be talking about three of those characters today. These are three minor NPCs that you need to know about.

Ol’ Emma is a familiar face in Stormwind and even if you don’t know her name you’ve probably seen her wandering around without even realising. Sometimes she’s muttering about collecting water or the past. In previous expansions, she used to look a lot more haggard, and her new look is most likely due to quests in-game and the novel Before the Storm in which she got a bit of closure about her family.

Her family is the reason I’m talking about her today. Back in Vanilla, there was a quest from Janice Felstone in Western Plaguelands. Janice was a ghost, killed by the Scourge and unable to move on. Confused and trapped, she rambles about needing a package delivered and adventurers go looking for it. They go looking for the package and come across a jabbering ghoul, who sadly turns out to be her husband.

The quest follows a different path for Horde and Alliance players. For Alliance players it traces back to Ol’ Emma, or as she was once known; Emma Felstone. She is Janice’s sister. The Horde quest leads them to a Forsaken man called Jeremiah Paxton, once Jeremiah Felstone; their brother.

It’s one of the few questline that links the humans of Stormwind to the Forsaken of the Undercity directly. That topic of that link is returned to again in Before the Storm when Ol’ Emma is one of the humans who goes to the human/Forsaken Gathering in Arathi Highlands. Her sons had become Forsaken and wanted to meet their mother, and she lost them all over again when Sylvanas ordered her dark rangers to shoot any Forsaken on the field. One of Emma’s sons carried her across the field towards the Alliance side as they tried to flee the arrows, and it was Anduin himself who grabbed a gryphon and saved her. He consoled her by telling to “live for all of them, since they cannot”. She later found solace with one of the other human relatives, young Philia who had lost her Forsaken father.

The Desolate Council does not appear in-game, however, I feel that their story is important to recent events and needs to be told. When Sylvanas became Warchief she began to neglect her own people, the Forsaken, visiting them less and less. Vellcinda Benton stepped in as a type of caretaker and created the Desolate Council to act as an interim organisation while Sylvanas was busy.

It was the act of a believer, not an opportunist, and Vellcinca and her fellow Governers only cared about the needs of their fellow Forsaken. They were helping to take a burden off of Sylvanas’ shoulders while she was away doing bigger, more important things. They were a very organised group and even had ten ‘Listeners’ whose only duty was to around the Undercity every day and listen to its people, taking note of any concerns and needs it’s citizens had.

Sylvanas didn’t take much notice of them, considering them little people running around keeping themselves busy with unimportant things. She had the Horde to run, a war to think about. She mostly ignored them. What she didn’t realise was that they were a response to years of her strict leadership, especially her views on life beginning at undeath for the Forsaken. They were told that their previous lives meant nothing, encouraged to change their names and forget their loved ones. The Desolate Council offered an alternate way with some Forsaken beginning to return to their old identities, using the names they used in their first lives.

It was at the Gathering when Sylvanas was made aware that Calia Menethil was present that she realised just how problematic this new Council had become. All of its governing members were slain that day and she let the remaining members live because they had returned to her early, broken and bitter because their human relatives had rejected them. When Nathanos questioned her about it she told him; “All the others . . . I cannot allow that sentiment, that hope, to grow. It is an infection ready to spread. I have to cut it out“.

Unless you’ve been hiding under a rock and never been to the Darkmoon Faire you know who Silas Darkmoon is; he’s the guy that created the Faire. What most people probably don’t know is that the Faire isn’t just about fun and games. In Blood Runs Thicker in Warcraft Legends Vol 4 Silas and the rest of the Faire’s crew save Kerri Hicks when she’s wrongfully accused of murder. Kerri’s a strong woman (and players will recognise her as a quest giver at the Faire) and was targeted due to her strength as well as being in the wrong place at the wrong time.

After the crew help prove her innocence she joined the Faire, but Silas isn’t done yet. Kerri’s accuser, the victim’s brother, was the real murder and got away with it. The crew abducted him and got their revenge, with Silas explaining to him, “We may dress differently… or seem odd… but we’re really just like everyone else. We value the same things you do… money, happiness, family… Yes, we’re a family. We’re a family that, like every other rube family out there, takes care of our own. We just do it our own way”. They then locked him in his dead brother’s coffin and buried him alive.

So next time you see Silas riding his dirigible through the Faire, remember not to make him angry…

Thanks for reading all about these three minor NPCs today. I hope you enjoyed learning a bit more about them! My challenge continues tomorrow even though Shadowlands goes live.

How about you; do you have a favourite minor NPC?

My challenge continues tomorrow even though Shadowlands is now live. Next up tomorrow’s prompt is about one of my favourite things in World of Warcraft; pets!

Image Credits: Image for Silas Darkmoon is from Wowpedia.