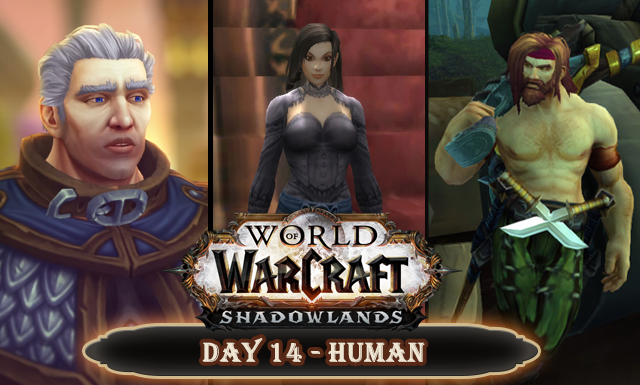 Hello everyone and welcome to day 14 of my 30 Day World of Warcraft Challenge that is counting down the days to the release of Shadowlands! Every day in November I will be posting about World of Warcraft based on the prompt list below. Today’s prompt is ‘human’ and I’m telling you all about my three human heroes who are absolute legends.

It was incredibly hard to pick just three humans from World of Warcraft that I love. Even deciding to share human heroes who are absolute legends didn’t make it easy and I’m sure the ones who didn’t make the cut will pop up in Seriously Geeky Sundays at some point (as many already have). So what makes a hero an absolute legend? Well, at least one of these characters has already become a legend in their own right, their story will be passed on for generations. But that isn’t why they made this list. Anyone can be a hero. What these characters have is style. That something extra. Let me introduce you to the three humans from World of Warcraft who, I at least, consider to be absolute legends.

“Sacrifice. To the young it means to change, but to the wizened it heralds an end. I know both meanings better than anyone else.“

Khadgar; the mage, the man, the legend. His history is the stuff of stories, and he has fought in multiple wars, facing some of the greatest threats to Azeroth. He’s saved the world more times than I can count – and he does it with style. Not only is he a skilled mage he’s a master at sarcasm and employs quips as deftly as he does arcane magic, firing them off in the heat of battle no matter what the danger. He’s got a wicked sense of humour and despite the seriousness of a situation always finds a way to have a little fun, as seen when he used his staff to whack arcane balls at the Iron Horde as the Alliance escaped to Shadowmoon Valley in Warlords of Draenor.

Despite his fun-loving nature the constant fighting between the Horde and the Alliance, especially after they came together to beat the Burning Legion once and for all, was too much for Khadgar and he has not been seen throughout Battle for Azeroth. I’ve missed his sense of style and hope to see him again soon.

“What’s the matter? Never seen a princess who knows how to twist a blade?”

The heir to Gilneas is a mixture of both her parents, her mother’s kind heart and her father’s fierce stubbornness. Tess has never been the type of Princess to stay out of a fight and considering her mother’s actions at Teldrassil I don’t think she was raised to be a damsel in distress. The women of the Greymane family shoulder as much responsibility as the men, and when the Burning Legion invaded again she was alongside her fellow Gilnean Lorna Crowley aiding players in Stormheim.

While her friend remained in Stormheim with her father and established the Gilnean encampment Greywatch, Tess went one step further and pledged her allegiance to the secret rogue organisation The Uncrowned. From the shadows she helped to fight the Legion, hesitating to join the organisation due to her status at first until she realised that the threat posed by the Legion was far bigger than keeping her secret.

Tess has continued to juggle her responsibilities as both a princess and her role as a hero, both beginning to merge into one and the same. She fought beside the Night Elves when they reclaimed Darkshore from the Horde, acting as co-commander of the Gilnean forces with Lorna. She is one of the next generation of heroes and is just beginning to forge her path. I look forward to watching her do it because she’s already proved herself to be an absolute legend, so anything further is going to be spectacular to behold.

“I fought in all three wars. I thought I’ve seen the worst Azeroth has to offer. I was wrong.”

War veteran John J. Keeshan exists as a tribute to real-life veterans and war movies. Like many war veterans, he survived the horrors of war only to return to home and receive a horrific welcome. Rather than be welcome back a hero he was spat on, called names, and had people protesting what he had apparently done in the war. It was not surprising that he drew away from the town, Lakeshire, and refused to have anything more to do with it.

It takes great courage and strength of will to help people who have turned their back on you and called you a monster, nevertheless that is what Keeshan did when Lakeshire was in danger. With help from Alliance players, he was reunited with his old company, Bravo company, and they set about foiling the plans of Grand Magnus Doane. The mastermind behind the invasion of Lakeshire is revealed to be a black dragon, Darkblaze, who had been using Doane as a guise. When Bravo company confronted Darkblaze it went badly with only Keeshan surviving, and that was just barely. He was believed dead until he was found alive in the Burning Steppes. There he continued his mission, working to defeat the Dark Horde and the Black Dragonflight with the aid of the Thorium Brotherhood.

As if that wasn’t enough war for one man, Keeshan has recently been active in the Fourth War as a part of the Alliance war campaign. He was instrumental in multiple missions including the defeat of Ranger Captain Areiel and Blood Prince Dreven’s san’layn allies.

Keeshan may not have the sass and style of Khadgar, but he’s a four war veteran and that alone is reason enough to consider him an absolute legend.

I will definitely need to revisit the topic of humans from World of Warcraft another time! For now, though I hope you enjoyed reading about these human heroes who are absolute legends.

How about you; who is your favourite human character?

Next up tomorrow we’re onto the last alliance race (until allied races on the 21st) with my personal favourite Night Elves! Oh boy, if I thought this one was hard… Join me tomorrow to see if I manage to limit myself to just three! 😉