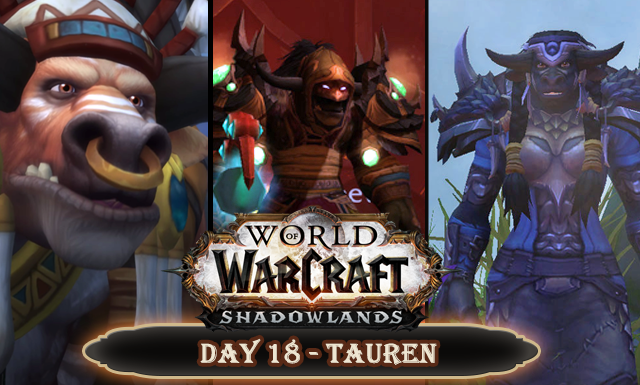 Hello everyone and welcome to day 18 of my 30 Day World of Warcraft Challenge that is counting down the days to the release of Shadowlands! Every day in November I will be posting about World of Warcraft based on the prompt list below. Today’s prompt is ‘tauren’ and I’m talking to you about three tauren characters that I find interesting.

I was surprised to find how much I struggled to find three tauren characters for today’s prompt. I had to change what I wanted to write about because I couldn’t find three I knew enough about, so instead of three honourable tauren I’m going to tell you about three I find interesting (because one of these is most certainly not honourable). Let’s begin with a very familiar face…

“Our people were once nomads. It is only recently, in the last few years, that we have halted our wandering and made a home for ourselves in Mulgore. It was a challenge. But we created villages and cities of peace, of tranquility and beauty. We imbued the places in which we dwelt with a sense of who and what we are. And that is what I wish to restore now. My father once said, ‘Destruction is easy.’ Look what havoc the Grimtotem were able to wreak in a single night. But creating some- thing that lasts—that, my father said, was a challenge. I am determined to make sure that what he created—Thunder Bluff and all the other villages, the goodwill between the members of the Horde—I will devote my life to seeing that they last.”

I started to like Baine as a character in The Shattering when he was able to finally step out from his father’s shadow and become his own character. If only his father hadn’t needed to die in order for that to happen :-/ As if losing his father so suddenly was not hard enough, Baine found himself at the heart of an assassination plot and his people being attacked on all sides by the Grimtotem Tribe. At that moment Baine made a choice to save his people. Not knowing who to trust within the horde under Garrosh, and with his allies too far away to help, he made a radical decision; he put his trust in a human.

With Jaina Proudemoore’s help, Baine was able to save his people and while he was in Theramoore he met his counterpart, the young Anduin Wrynn. It was the beginning of a friendship that has heavily influenced recently events and may even lead to peace between the two factions. Baine struggled with his need for vengeance, against the Grimtotem for the cowardly murders of his people while they slept and against Garrosh for his father’s death. Rather than running off to do just that he rationalised why he shouldn’t, and why he couldn’t, explaining it to Anduin and Jaina. He understood his father’s decision to challenge Garrosh was done for a reason, and while the outcome was not what either of them wanted, he could not go against the ancient traditions of their people either.

It left Baine in a difficult and painful position and one that I feel a lot of people don’t give him enough credit for. What if he had gone after Garrosh in a fit of rage? If he had challenged Garrosh in retribution? Cairne and Garrosh had fought under the old rules where a winner was declared by death. Garrosh was arrogant, but not foolish enough to kill two Tauren chieftains and expect the Taurens to fall in line. Under the modern rules if defeated Baine would have survived and would have lost much credibility as a leader of his people. He lost some when he didn’t immediately retaliate, however, Garrosh was simply a patsy in Magatha’s schemes and was appalled to find out that he had not won the duel honourably. In the short story As Our Fathers Before Us Baine is given the opportunity to save Garrosh from his own temper and short-comings, and at the same time proving himself to doubters amongst his people that he has what it takes to lead them.

What I find interesting about Baine is that he thinks differently to other Horde leaders. His father was the same, and it may indeed be the influence of the Tauren way of thinking and being. Their connection with the Earthmother means they feel a stronger connection with the world and those within it. Baine seems to always be thinking, taking the entire world in rather than just thinking in short term goals. That doesn’t mean he’s not thinking about his people first and foremost, quite the opposite; he’s thinking more about their place in everything.

“I have served the wilds for as long as I can remember, mentoring young druids and watching them grow in knowledge and experience. There are few who have ascended to the rank of archdruid, but I believe you can become one of our best.”

This wise and caring druid of the Cenarian Circle was the first non-kaldorei druid. Impressed by the druids in the Battle for Mount Hyjal he sought them out and asked to learn their ways. Malfurion agreed, but his former student Fandral Staghelm had multiple objections many of which were xenophobic in nature. It wouldn’t be the first time that Hamuul encountered such behaviour from Staghelm or others. He continued with his studies and rose to the rank of archdruid, growing to be a valued member of the Cenarian Circle over the years.

Hamuul is one of those quietly impressive characters who are incredibly powerful and influential yet makes an effort not to be. His caring nature seems to go beyond the normal druid’s vestment in the world and its creatures. He has pushed harder for peace between the two factions than any of his fellow druids, trying to resolve tensions while working on whatever crisis is happening at the time.

“Though Baine may have exiled me from Thunder Bluff, I am the leader that the tauren need. They sit idly by in their tents, waiting for the Alliance and the Legion to effortlessly roll over them. My people and I refuse to let that happen to us. We do what we must to survive.”

While planning this post I called Magatha ‘an evil bitch’ to my fiance and we ended up having a chat about her. The general consensus was that Magatha isn’t really evil and no, I’m not about to say she’s misunderstood. She killed Cairne, she murdered him as surely as if she did it herself. Except she didn’t because she knew she didn’t have the strength to do it. Magatha is a shaman, in a battle of strength where magic is not allowed she could never win and therefore, she had to trick Garrosh into doing her dirty work for her. It was cowardly and dirty, but it was clever.

Magatha has always been clever and her loyalty has never been to the Tauren people, it’s been to her people; the Grimtotem tribe. She was not even born a Grimtotem, she became one through an arranged marriage although it’s widely believed that it was one she had a hand in arranging herself – and his “accidental” fall off a cliff. Cairne sought to keep Magatha and the Grimtotems close by so he could keep an eye on them, offering them a place in Thunder Totem despite them never joining the Horde. Over the years the Grimtotem became more hostile with the Horde and the Alliance, attacking them and destroying the Shady Rest Inn in Dustwallow. Despite these incidents, the Grimtotem remained in Thunder Totem although it appears that tensions between Cairne and Magatha continued to grow strained. Her thoughts in The Shattering showed that she had been plotting to take Cairne down for quite some time.

After her plans were foiled Magatha and her supporters were exiled from Thunder Totem by Cairne’s son Baine, the new Tauren chieftain. Exile wasn’t easy for Magatha as the Twilight’s Hammer took advantage of her being outside of Thunder Totem’s walls, kidnapping her their own ends. They misjudged the canny Grimtotem chieftain and it wasn’t long before she’s turned their operation on its head, gaining access to their magical texts and powerful artifacts including the legendary Doomstone.

Her win over the Twilight’s Hammer was shortlived. The Legion invaded again and the Grimtotem stronghold of Darkcloud Pinnacle was one of their first targets. They wanted the Doomstone and for all her power Magatha was unable to stop them. As always Magatha put her people first and this time it meant swallowing her pride; the Burning Legion were something she couldn’t defend against. She had nothing up her sleeve, no clever plot that she’d been planning for years that would defeat them. She went to the Earthern Ring for help and found herself facing the new Farseer’s judgement.

The Farseer agreed to help Magatha and together they retrieved the Doomstone from the Legion’s grips, however, knowing Magatha’s history the Farseer refused to render it into her care. Stubbornly Magatha refused to let the Doomstone out of her sight and joined the Earthern Ring, fighting alongside the Farseer to stop the Legion. Despite her pledge, Magatha disappeared at some point during the Fourth War when the Maelstrom was overtaken by azerite elementals. No one has seen her since, leaving Nobundo, another member of the Earthern Ring to keep the Doomstone secure.

Thanks for reading all about the Tauren I find interesting, I hope you found some of them and their stories interesting too! I hope to expand on my knowledge of Tauren characters as I level my Horde allied race characters.

How about you; who is your favourite tauren character?

Next up tomorrow I’ll be talking about trolls, so check back then if you’re a troll fan 🙂