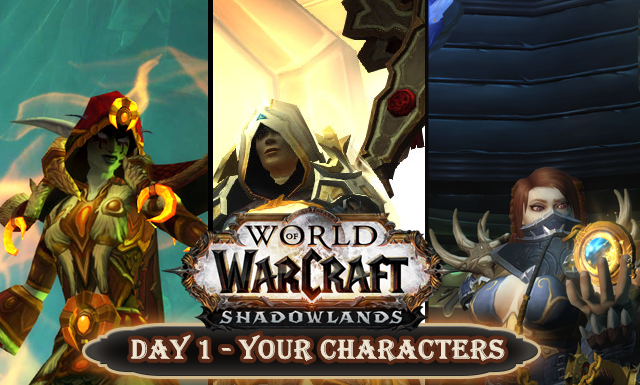 Hello everyone and welcome to day 1 of my 30 Day World of Warcraft Challenge that is counting down the days to the release of Shadowlands! Every day in November I will be posting about World of Warcraft based on the prompt list below.

I’d love for you to join me in my countdown to Shadowlands and you can do so in any way you wish. I wanted this challenge to be open to all players whether they be raiders, casual, new to the game or veterans. It’s also completely open to interpretation as to how you respond to the challenge; write it, draw it, vlog it, post it on social media, whatever works for you.  Read more about taking part in the challenge here.

The prompts I’ll be following throughout the month are:

In 2017 I devoted a week to my favourite video game, World of Warcraft, and my first post was an introduction to my characters which included a backstory for each one. For today’s prompt, I decided to do something a bit different and offer you 10 interesting facts about my World of Warcraft characters. After 16 years there’s a whole bunch of stuff to tell you!

1. I’ve had two mains over the years

Way back in 2004 when World of Warcraft originally released I started on my Night Elf druid until I chose to relocate to another server. Back then server swaps weren’t a thing so if you wanted to move server you had to start from scratch. I wasn’t a fan of druid healing so I re-rolled a human priest and for a long long time, she was my main. It’s only been in Battle for Azeroth that I’ve gone full circle and swapped back to my druid.

2. I’m going through the alphabet

I dislike having characters beginning with the same letters because when I go to mail something it takes that bit longer. That might seem petty but when you’ve got 13 characters and your partner’s got just as many it gets frustrating. So years ago I started going through the alphabet every time I make a new character. I currently have no characters for these letters: G, H, J, N, Q, S, U, V, W, and X.

3. … but I still have 4 Characters beginning with the same letter.

Yup. The person who hates having characters with names using the same letter managed to name not two, but FOUR characters with the same letter? The worst part is that two of them even have the first two starting letters ‘th’. /facepalm. I’m not even sure how that happened, and yes, this is also part of the reason why I put my alphabet method into practise so that I was actively paying more attention.

4. I have 4 Night Elves & somehow ended up with 3 Dwarves

The Night Elves were completely on purpose, although as you may have guessed the Dwarves were not! Much like the naming issue, the creation of the Dwarves remains a mystery and since one of them has a name beginning with ‘Th’ I believe there was some trickery about! I made my peace with it by naming the three Dwarf ladies sisters and you can read their stories here.

Back in the day when I healed on my druid, I did it as Balance. Yep, shameful I know. Back then Moonkins didn’t exist yet and while Balance was supposed to be a damage talent spec it wasn’t a viable one and so any druid who specced it was expected to also spec partially in Restoration so they could heal in raids. While I liked healing, I didn’t enjoy druid healing or being forced to do something I didn’t want to do. Swapping to a priest was the right decision for me in that respect and years later when Moonkins finally arrived I was able to enjoy the spec I’d always wanted.

On my Priest it was a similar story; I’ve always been a Discipline spec. While Holy was considered the healing spec, guilds also wanted someone who specced for the spirit buff so I got away with it. When Discipline changed in Wrath of the Lich King I was ready for it; I’d had the Beta and had been practising. Finally, the spec I’d loved was useful in raids beyond being a buff.

6. I’ve got 15 years worth of screenshots of my characters

I’m a screenshot addict which comes as no surprise to anyone who has seen my screenshot gallery. What you might not know is that I’ve managed to keep hold of my screenshots through several PC crashes thanks to always having a gallery uploaded online somewhere. That means I have 15 years worth of screenshots of my characters and how they’ve changed since Classic. It’s a little odd, almost like looking at a family photo album at times, but also really cool. You can view my character galleries here, including an album of characters that no longer exist.

7. I have Loremaster on two characters

I got bored between expansions one time and decided to do Loremaster a second time. There was a point to it; I’d completed the first Loremaster prior to Cataclysm. After Cataclysm a bunch of new quests popped up and I wanted to experience them so I did it again.

8. I have almost 26k achievement points

I’m a completionist and I actually really do enjoy the challenge of achievements. There’s a lot of things in the game, such as PVP, I don’t think I’d have bothered to even try (and found I quite enjoy) if achievements didn’t exist.

I’ve raided in every expansion up to Legion which is when I started to get my symptoms for ME and was forced to stop raiding with my guild. ME is a neurological condition and as a result, I can no longer focus on a raid properly. I can just about manage a wing in LFR now before I have to stop and take a break. Thanks to LFR I at least get to keep up with the content and get to experience it.

I originally started on Arathor where my druid was called Aisling. I rerolled my priest, Eleasea, on Kul Tiras and stayed there for many years. I met my fiance, Chris, there and we both then moved to Ghostlands, where my priest became Isolde for a while. We then moved to Aerie Peak where we have been ever since.

Thanks for reading the first day of my World of Warcraft challenge. Follow my blog by subscribing in the sidebar or follow me on Twitter, Instagram or Facebook to get a notification when each new post comes out. If you’ve got any questions about my characters – random ones included! -let me know!

Next up tomorrow is Expansion where I will be talking about my top three World of Warcraft Expansions. Will they be surprising, will they be controversial? You’re just going to have to wait and find out! 😉