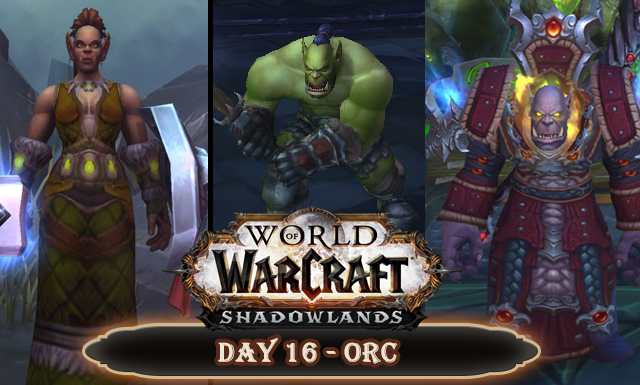 Hello everyone and welcome to day 16 of my 30 Day World of Warcraft Challenge that is counting down the days to the release of Shadowlands! Every day in November I will be posting about World of Warcraft based on the prompt list below. Today’s prompt is ‘orc’ and I’m sharing with you my three favourite World of Warcraft orcs.

As a predominantly Alliance player I don’t have as much experience with orcs, or many of the Horde races, as I would like. That means most of the ones I do know are from books, major storylines or class order hall campaigns. I’ll be levelling my Horde allied race characters soon and I’m looking forward to getting to know more characters. For now, though let me share with you my current favourite World of Warcraft orc characters!

“You have been able to hide behind the mantle of warchief. And that is why you  are finding it so hard to free yourself of it now.” She pressed her face even closer to his and hissed, “You bear the name of a slave, because you are a thrall to the  Horde. A slave to what you think is duty. And you use that duty as a shield—a barrier between you and the dark places, between you and guilt, and fear, and second-guessing. And truly belonging to yourself—or to anyone else. You always plan ahead, and you do not take time to think about how far you have come, the amazing gift that your life has been. You strategize for tomorrow, but what about now? This moment … the little things …?”

Thrall: Twilight of the Aspects

I didn’t care that Thrall got a girlfriend (and then a wife), I liked Aggra because she didn’t take any crap from Thrall. In The Shattering, she was given the task of teaching him the ways of a Shaman and found that he knew absolutely nothing. This big shot orc from another world who was supposed to be special, and she found him lacking. It’s not that I disliked Thrall, but watching Aggra pull him down a few pegs was amusing. Even now in-game as his mate and mother of his children she still makes comments about reminding him of his place 😀

She’s a completely different type of female character to those we’d previously seen in World of Warcraft and she also reminds me a lot of Draka (who almost made it onto this list too!).

“Second rule! Only fools talk so much on the battlefield!”

War of the Ancients Trilogy

Oh Broxigar, dear Broxigar. I am so happy that players got to meet you in-game even if it was so brief. Such a legendary character who made such an impression on me when I read Richard A Knaak’s War of the Ancients Trilogy. It’s not just the fact that he’s one of two mortal beings to have ever wounded Sargeras (the other being the aldrachi king Toranaar), it is in the way he held himself. He is a veteran of three wars, and despite being considered to be a great hero by his people for his actions during the Third War, Broxigar felt the complete opposite. As the only survivor, he felt more like a coward than a hero and felt he should have died on the battlefield along with his comrades. That was a noble death.

Being thrown thousands of years into the past by a temporal anomaly, Broxigar was given the chance to redeem himself in his eyes. He showed himself to be an honourable warrior, eager to die a warrior’s death but not at the risk of his friends. He offered wisdom to his companions about battles, helping them to cope with the realities of war. He also thanked Rhonin for being an ally despite him being a human, noting that a good warrior welcomes all allies.

He didn’t just get his wish of a noble death, he went out in what can only be described as a blaze of glory, wounding the fallen titan Sargaras. After his death the dragon Krasus ensured that the orcs knew what had happened, and told the Horde Warchief, Thrall, to make sure that songs were sung of the greatest hero the orcs had ever had. To this day Broxigar is the only World of Warcraft orc that the night elves have ever raised a statue to and Tyrande Whisperwind considers him to be “one of the great heroes of Azeroth” (War Crimes).

“It is true, pink skin, I was there when the Firelord was vanquished. The intensity of his flame was unlike anything you can imagine.”

To be completely blunt, Ritssyn is a grumpy old sod with an attitude problem and an addiction to power. The latter really isn’t that surprising considering he’s a warlock. While his fellow council member Zinnin is a silent companion, Ritssyn quickly manoeuvres himself into place as the Second of the council claiming that the new Netherlord needs someone with experience by their side.

When first meeting the other warlocks who would later form the Council of the Black Harvest he mocks them, arrogant in his presumption that he has faced the worst and greatest power on Azeroth and survived. Jubeka Shadowbreaker notes that Ritssyn seems confident enough to take on one of them, but not all of them, suggesting that while he is arrogant he’s not a complete idiot. Or perhaps he saw the wisdom in working alongside other warlocks that like him had survived such powerful magic. Together they would be unstoppable, and that is indeed his goal throughout the warlock class campaign. He’s immediately impressed with the new Netherlord’s abilities, recognising their ability to do things that the rest of the council cannot.

Thanks for reading today’s post about World of Warcraft orc characters and I hope you enjoyed this first look at Horde races!

How about you; who is your favourite World of Warcraft orc?

Next up tomorrow is the only race that can be played by both factions; that’s right it’s the race that seems to be the marmite of World of Warcraft. Some people love them, and others can’t stand them. Where do I stand on the subject of Pandaren? You’ll need to wait and see tomorrow 😉