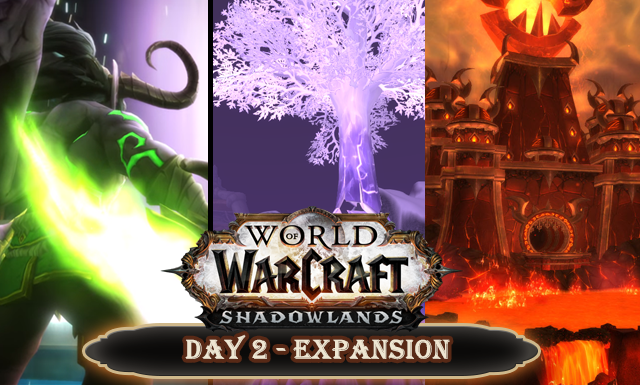 Hello everyone and welcome to day 2 of my 30 Day World of Warcraft Challenge that is counting down the days to the release of Shadowlands! Every day in November I will be posting about World of Warcraft based on the prompt list below. Today’s prompt is expansion and I’ll be nattering on about my favourite World of Warcraft expansions!

I’d love for you to join me in my countdown to Shadowlands and you can do so in any way you wish. I wanted this challenge to be open to all players whether they be raiders, casual, new to the game or veterans. It’s also completely open to interpretation as to how you respond to the challenge; write it, draw it, vlog it, post it on social media, whatever works for you. I know that October is Inktober and that many artists are looking for alternatives due to the recent controversy surrounding Jake Parker so feel free to use this as an art prompt too! 🙂 Read more about taking part in the challenge here.

Every so often there is a meme that goes around twitter asking that controversial question ‘you can only keep 3 expansions, which ones do you pick?’ (Warlords of Draenor tends to have been automatically removed). It’s a discussion I see come up in guild chat whenever timewalking comes around. Everyone has their opinion of what is the best expansion and while I disagree with some people on their choices, I love that there is so much choice. The changes coming in Shadowlands to levelling allows everyone to level new characters where they choose, reliving content they enjoy again. Today though I’m not here to talk about the new expansion, I’m here to tell you about my three favourite World of Warcraft Expansions and share why I rank them higher than any other expansions.

Legion just had so much to give in terms of world-building and stories, and for me as someone who loves World of Warcraft lore it was the one expansion that finally came together and tied up a lot of open storylines. Ever since I read Beyond the Dark Portal I’ve wanted to know what happened to Alleria and Turalyon. All we knew was that they had left a son behind in Honour Hold. Every expansion I waited, and then finally in Legion the pieces started to point towards it finally happening.

They weren’t the only ones who’s story finally got an ending. The Draenei, the Burning Legion, the Titans, Illidan and the Demon Hunters… so many things happened in Legion. It was stuffed to the brim with lore and stories, and then there was even more story goodness to be had with each individual class having a Class Order Hall campaign. Some of them weren’t great, but most were fantastic. As someone with at least one alt of every class I enjoyed experiencing every single one.

This expansion also bought with it the transmog system which I absolutely love, world quests especially world pvp quests which allowed me to easily collect every single transmog pvp set, the new account wide honour system, stunning artifact weapon designs, and let’s not forget the amazing Demon Hunter class which somehow I manage to kick ass on?!

Legion was not without it’s irrtations – none of them have been. That didn’t stop me from enjoying the good parts though.

Cataclysm is the only Collectors Edition I own and while I’d be happy to own any of them I’m glad it’s one that is one of my three favourite World of Warcraft expansions. This was the expansion where everything changed and quite literally as the entire map of Azeroth was turned upside down by Deathwing’s eruption from Deepholm. It took us to never before seen places, some we’d only heard about in legends and the world became just that bit bigger and scarier. I remember as a priest that feeling of shock and uncertainty when it was revealed that Archbishop Benedictus, the guy I’d been to for all my training for years, was not just member of of the world ending Twilight’s Hammer, but their bloody leader! Yep, nothing was the same after that.

And let’s not forget the most important thing about this expansion; dragons! All the dragons. I fell in love with the dragonflights while reading Richard A. Knaak’s World of Warcraft novels, Day of the Dragon and Night of the Dragon, and we’d only seen them briefly in Wrath of the Lich King. In Cataclysm there was more focus on them, and while I was unhappy with how their story ended (specially dear Krasus 🙁 ), it was an action packed experience as a player.

While Vash’ir was not my favourite zone (and like many I avoid it), I did appreciate the attempt developers made to try something new. I felt that Cataclysm represented the first expansion where zones started to be individual rather than feel really similar. It was easier to do in this was as the zones were so spread out, however, even in the next World of Warcraft expansion, Mists of Pandaria, it felt like there was a shift towards giving zones more of an individual feel.

1. Wrath of the Lich King

For my favourite World of Warcraft expansion the reason it sits in the number one spot is pure nostalgia. This is the expansion that I have the fondest memories from, it’s the one that has my favourite raid, and it is just generally the one I had the most fun in. Wrath of the Lich King also introduced changes to discipline priests that radically changed the way I played my main. Likewise, the addition of things like achievement points and more collectable mounts like the item began to shape the way I still play the game many years later.

This was also the first World of Warcraft expansion to include a new class and I thoroughly enjoyed the Death Knight story arc, as well as playing my Death Knight over the years.

Overall Wrath of the Lich King had so much fantastic content, incredible storylines and one of the most tragic and compelling big bads in World of Warcraft history. That is what makes it my favourite World of Warcraft expansion of all time.

Thanks for reading! Will Shadowlands knock one of my top three favourite World of Warcraft expansions off it’s top spot? I honestly don’t know. I’ve been unfortunately too sick to enjoy my Beta key so I have been avoiding spoilers. What I do know is that I continue to enjoy the game and I’m always eager to see where the story goes.

How about you; what are your favourite World of Warcraft expansions?

Next up tomorrow is Questline where I will be talking about my top three questlines from the current expansion, Battle for Azeroth. What makes a questline special in my eyes? You’ll need to check back tomorrow to find out!