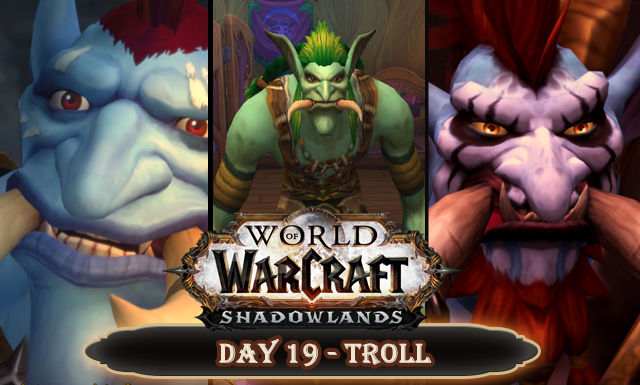 Hello everyone and welcome to day 19 of my 30 Day World of Warcraft Challenge that is counting down the days to the release of Shadowlands! Every day in November I will be posting about World of Warcraft based on the prompt list below. Today’s prompt is ‘troll’ and I’m discussing my favourite trolls.

For those wondering if there would ever be one for the boys, here you are 🙂 Sometimes I find myself leaning towards female characters and sometimes it’s towards the male characters. For trolls, it seems to be the latter and they’re all completely different personality-wise.

“Dis was never a rescue mission. Dis be about power, an’ control, an’ Sylvanas think she be holdin’ all da cards. But she didn’t count on us!”

Young Zekhan has come far since the night before the Siege of Lordaeron when he approached Saurfang and asked him for advice on the eve of his first battle. He has gone from being a wide-eyed newcomer to battle to standing up against a tyrant and rallying a resistance, saving the old soldier who had once helped him. After Saurfang’s death, he decides to continue to live up to the example set by his father and Saurfang and begins by telling the orphans in Ogrimmar tales of Saurfang to inspire the next generation. Zekhan features in the new World of Warcraft novel Shadows Rising and I’m looking forward to getting to know him better, and hopefully seeing more of him in future expansions!

I couldn’t help but find the hapless new druid Zen’kiki adorable. Every druid we’d seen previously always seems too powerful and ancient, many of them being night elves so they literally are ancient, and it was refreshing to have a druid who wasn’t so self-assured. While I’m very aware that he exists as a parody and he is funny to watch, it’s also wonderfully charming to see him succeed as well. We need more characters who take their first steps and grow alongside us, learning the ropes of their class abilities.

“This world don’t give us nothing. It be our lot to suffer… and our duty to fight back. This Horde be our family! We don’t always see eye-to-eye. We come to blows before. But when we work together – ah – there’s nothing this Horde can’t do.”

In comparison to the other two trolls in this post, Vol’jin is at the other end of the scale entirely. He’s a skilled confident leader who left naivety at the door long ago. After everything he went through as a young troll, it’s amazing that he still has the capacity to care and trust in people. Instead, his experiences with Zalazane and the ongoing struggle to see his people free of the witch doctor’s dark magic gave him an even stronger conviction against repression. So when the Garrosh Hellscream’s lust for power and extremism started to concern Vol’jin the troll didn’t stand down.

After multiple conflicts, he took the Darkspear tribe out of Orgrimmar and started to talk to others about his concerns. When an “accident” leads to the death of other concerned members of the Horde, those concerns grew and after further clashes with Garrosh, Vol’jin barely survived a ploy that led to an attempt on his life. While recovering under the care of the Shado-Pan, Vol’jin was being treated alongside the human Tyrathan Khort who had been injured by the sha. The two were instantly at odds with one another, but Taran Zhu wished to learn more about how the two factions interacted with one another. Therefore, he had them help each other heal, aiding one another in menial tasks and playing a pandaren game called Jihui where the objective was for the players to arrive at a satisfactory outcome together rather than one win over the other.

Taran Zhu‘s plan worked and the two formed a grudging partnership which grew into a friendship after Vol’jin underwent a ritual to save Khort’s life from a sha. After that, both of them bonded over the fact they had both died and returned to life, both unsure of what that meant. What they did know was that they were no longer the same people they were before and that scared them.

Vol’jin was not the type to sit idle or squander opportunity; he trained with the monks at the monastery, working through each of the tasks that Taran Zhu gave him. It kept his mind off his worries; the loa had been quiet since he had undergone the ritual to save Khort. When their voices did return it was to give him visions that he did not understand. It was Bwonsamdi who offered him answers, telling him that the loa had been trying to remind him of what it meant to be a troll. Bwonsamdi thanked Vol’jin for sending him souls and bestowed him with the gift all trolls have, the gift of regeneration. With that restored Vol’jin was able to begin healing properly, however, in recognition of what had happened to him and marking him forever as a different troll to the one who had fallen for Garrosh’s ploy. His throat had been slit during the attack and he let a section of his throat slit deepened, slighting altering his voice as a result.

Vol’jin was an essential part of the pandaren’s defence against the Zandalari Army. After helping the pandaren he returned to find his people under martial law and began to seek allies to overthrown Garrosh’s rule. The result was a rebellion that saw both the Horde and the Alliance unite to stop Garrosh and remove his as warchief. The siege of Orgrimmar was a success and it was Vol’jin who was chosen to lead the Horde in his place.

Over the next few years, Vol’jin saw the Horde through the war against the Iron Horde on Draenor, finally seeing an end to Garrosh’s plots. When the Burning Legion invaded they joined the Alliance in attacking the Broken Shore, covering the high ridge as the Alliance confronted the warlock Gul’dan. It was to be Vol’jin’s last battle. Wounded in battle he named Sylvanas Windrunner his successor and later died from his wounds.

I’ve yet to finish the Horde quests that tell more about what really happened when Vol’jin died and named his successor, as we now know something hinky went on. I’d appreciate no spoilers. It struck me odd at the time that someone as honourable as Vol’jin would pick the Banshee Queen as his successor, especially as Baine had been his co-conspirator throughout the rebellion against Garrosh. If he once thought Baine to be too inexperienced, certainly by that point he had learned otherwise.

I am looking forward to finishing that questline and learning more, for now, Vol’jin remains a character who I knew nothing about and then slowly grew to admire and then I understood why people liked him so much.

Three very different characters for today’s post. It goes to show that it takes all sorts of characters to make a game what it is 🙂 From the new trainee to the lowly soldier or the highest rank, a warchief.

How about you; who is your favourite troll character?

Next up tomorrow is the final Horde race before I move into the new allied races; undead also known as the Forsaken. It should be an interesting one so stay tuned!