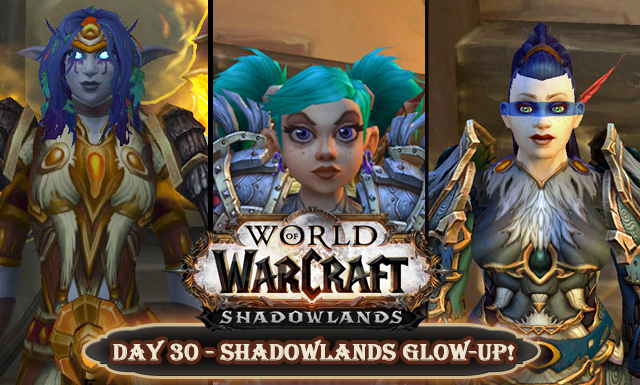 Hello everyone and welcome to the final day of my 30 Day World of Warcraft Challenge that is counting down the days to the release of Shadowlands! Every day in November I will be posting about World of Warcraft based on the prompt list below. Today’s prompt is a free choice and my followers on Twitter voted on the choice on topic. The winning topic was Shadowlands glow-ups and I’m sharing mine today.

As voted by you my dear readers the freebie topic for the final day of my 30 Day World of Warcraft challenge is my big reveal of my Shadowlands glow-ups. For those who are unfamiliar with what this means, let me explain a little. Before each new World of Warcraft expansion, a large pre-patch of content is released. In the one before Shadowlands, one of the big changes was new cosmetic changes to character appearances. These have been long overdue and personally, I still think they have a long way to go in keeping up with the options available in other MMORPGs. The new appearances became known as ‘Shadowlands glow-ups’ because of the massive physical transformation.

I’ve kept all of mine under wraps except for my main character, Aleassa, which has been very hard to do! I am so happy to be able to finally share these with you because I am so in love with some of these new looks!! I have only changed the appearances of my Alliance characters at present so there will be a Horde character glow-up in the future.

Some characters had massive changes and a few only had little tweaks. I’m going to walk you through each one and then I’m going to introduce you to my new allied race characters. They didn’t get a glow-up because there were no new options for them available.

I am really happy with how Aleassa’s glow-up came out. I’ve always wanted wavy hair on a night elf (all the styles are straight and boring) and this wild, wavy look works perfectly for a druid, especially with the vines weaved through it. You can’t see it in this image but her hair is long at the back.

Her face looks like I’ve altered it slightly, however, that wasn’t an option and has just been a slight change by Blizzard to night elf faces. We can finally select the colour of face tattoos so I went with a blue to match her hair rather than the bright pink/purple. I also changed her eyebrows to something that seemed wilder, again, more druid-y to me. Finally, the leather choker was added.

One of my favourite changes has been the ability to change eye colour. My poor sister dwarves (read their story here) have been stuck with horrible pink/red eyes for years. Arasse now has beautiful pale green eyes, and I had great fun with the new dwarf clan settings for her. As a hunter, she naturally chose Wildhammer and has blue tattoos on her arms and face. Her gorgeous red hair is pinned in a Celtic knot at the back to keep it out of her face and has a few blue feathers to represent her clan in it.

Bryanna is both a glow-up and a character reveal 🙂 Bryanna was my little night elf hunter who I made because I’ve always wanted one and I used my Shadowlands boost on. I knew I’d never use it on a Horde character since we planned to level each of the allied races for their heritage armour sets, so save me levelling another character… one ready-made hunter!

It was nice to be able to get her ready to play by making her look the part straight away. As you can see there were only subtle changes here; a darker hair colour and tattoos, the addition of vines and a matching purple necklace. Simple yet really effective and I’m glad I could use the black/grey hair on someone. None of my other night elves really fit that vibe.

My rogue had the smallest of changes; her eye colour. She is one of my dwarven sisters along with Arasse (the third is Thistalee, below). I was already pretty happy with her appearance. I can’t remember if she has any clan tattoos or not under her transmog. As a rogue, I might have decided to forgo them.

My former main has ended up being the one glow-up I’m really not happy with and there’s nothing I can do about it! I’m really not that happy with the way human female faces have turned out. In the preview window, her appearance looks great, but then when I took a screenshot of her for this post her lips are stuck in a duck pout :-/ I tried several alternative faces and make-up options and still the same pout. It’s the way the shadows fall on their lips.

Everything else looks great, and I’m really happy with her eyes, eyebrows and the jewellery options. I just can’t stop seeing those lips.

I won’t leave you hanging. It is literally just the addition of a choker. As demon hunters were a fairly new addition there wasn’t anything new for their customisation and I don’t want to make her look more like a standard night elf. Layla looks great the way she is 🙂

My only other human character is Melantha and again, the face isn’t that great but it’s better than Kaelea’s. I feel like I’ve made an all-American teen pop singer. She looks super bubbly and cute with those freckles and big blue eyes, however, that works for Melantha.

This patch finally gave players the chance to separate the two which means Roisin got not one, but TWO glow-ups! I had to much fun with her human form glow-up and I am in love with it. I don’t normally play her in human form because well, that’s the whole point of playing a Worgen, right? But I might because I love how she looks.

It’s not that easy to see the differences between the before and after of her Worgen form with her transmog on so I’ll describe them here. The obvious one is her eyes; the same pale pink/purple as her human form. Her hair is also different, instead of down her back it’s whipped up into a side braid to the right which you can just about see. I toyed around with her colouring, however, I think I went with the same one in the end.

I wasn’t that interested in the changes for Pandaren so Takeko only got a few minor ones. New jewellery and a change of fur colour.

The biggest change for her was her tail! She’s gone from a small round nub to a long fluffy fox tail 😀

Another of my favourites is Tempestia’s glow-up. When I saw the new colours available for gnomes I just knew she had to go loud and proud. The feisty gnome is still adorable, her hair is just another candy colour and her eyes are the colour of amethysts. She’s accessorised accordingly with purple gemstone earrings.

Love, love, love this side shorn look for night elves! Thaelynn is absolutely rocking it. Her entire glow-up is about punk-rock attitude from the new hairdo to the jewellery and purple tattoos.

Probably the most radical change of all my characters is Thistalee, who like her sister Arasse joined the Wildhammer clan. For her glow-up, I went pure elemental shaman, with dark blue hair and tattoos. Her hair drops down her back in long braids, with a feather tucked behind her ear to herald her as a member of the Wildhammers.

A change in hue for Zaeliah, from blue to purple in her skin tone and her hair. I also changed her facial expression too to give her a more serious expression now that she’s gotten more experience with the world.

Now it is my pleasure to introduce you to my new allied race characters!

It took me forever to come up with this name. I went through so many names beginning with ‘dusk’ before I finally combined it with an old character name ‘Kaelie’. Duskaelie is the only allied race character that didn’t make it to level 50 before Shadowlands, although at level 40 that’s not a bad attempt 🙂 My other Alliance mage is Fire, so I’m trying Arcane on this one.

Eleasea was the name I used for my priest back in the day before we swapped realms and it’s still been a favourite of mine ever since. I’ve been waiting for an opportunity to use it again, but the right character never came along. When kul tirans were announced it finally felt like the right fit and I saved the name in preparation.

My kul tiran was going to be a druid from the moment I saw their druid forms. With some coaxing from my fiance, I levelled Eleasea as a bear and was surprised at how much I actually enjoyed it. I don’t intend to tank anything on her, but I’ll continue playing her as a bear.

I really love the way dark iron dwarves look, and what you can’t see in this image is the tiny braids in her hair or the way her hair shimmers with lava. My other warlock is destruction and so for this one, I went demonology, and again, was surprised to find how much I really liked it.

I wasn’t that keen on mechagnomes, to be honest, and making Xyliana a death knight meant I had one for the heritage armour and I got to see the allied race death knight storyline/start. I like the way she ended up looking, and the way mechagnomes look with their mechanical limbs works really well with plate transmogs. I love her coiled elegant hair. I’m currently playing her as Frost because I was too lazy to learn another spec, but she’s probably going to end up Unholy.

Yaletha is the only allied race character to have been on my character list before today. She was the first one I levelled and I’ve had her quite a while now. Like my other priest, I play her as both holy and shadow, but the idea was for her to be primary holy.

Thank you for reading this post and for taking the time to check out any of my other posts in this challenge. It has been an incredible challenge, and so much fun to write.

I’ll be taking a short break to enjoy Shadowlands now that the challenge is finished, but lookout for a few more World of Warcraft posts coming in the next few weeks 🙂