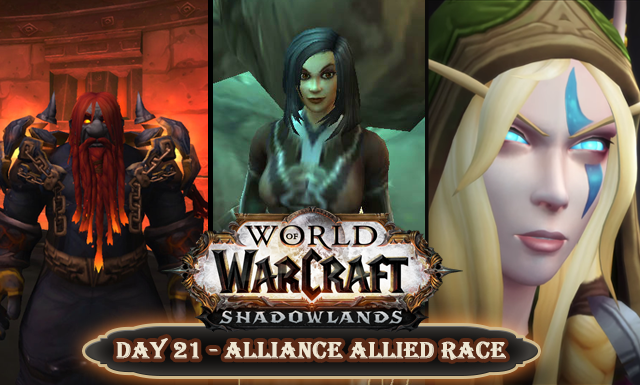 These next two posts are going to be a bit different from the other character posts I’ve done so far. I’m skipping the lore stuff and jumping straight to telling you guys why I like these characters. There are several reasons for that; firstly, there’s not much lore for these characters, or in some cases, there are thousands of years worth, and secondly, they’re really new. We’ve just been playing alongside them, doing quests, saving Azeroth with them, etc. so there’s not much need for me to go into it all (sorry for all the non-WoW players who have been enjoying that aspect of these posts!). Plus with five allied races for each faction that’s a lot of extra work.

“Still no’ comfortable sharin’ me arts with the whole Alliance…”

Dark Iron Dwarves have existed in World of Warcraft since it began, however, they are only available for players to play as one of the new Alliance allied races. It means that they’ve moved from being the agitators to misguided or misunderstood characters, and it’s led to some interesting characters. Although we’ve had some dark iron dwarves with bigger roles (namely Thaelin Darkanvil and Hansel Heavyhands) I’ve actually chosen one of the newer characters as my favourite.

Anvil-Thane Thurgaden is a quest giver who isn’t too keen about working with the Alliance. He mutters about working with competent people and snaps at Thaelin when he criticises him, but by the time players have finished the questline he seems to have warmed up to them a bit. He seems rather happy with how everything went and admits to being jealous that the champion got to play with the elemental they summoned.

He’s a grumbler but it’s most likely a facade to hide how uncomfortable he is, and when it came to getting the job done he did so without any drama. Thurgaden showed no arrogance and only talked about his power when questioned by Thaelin. There’s a soft teddy bear under that gruff exterior, and while he quibbles about sharing his secrets I think he just needs to meet the right person and he’ll be sharing ideas in no time!

“I understand this well. Halford, I watched as my own planet became a bitter, dead husk. All because of the desire for power that some of my people could not control. Your Horde, if left unchecked, will mean the doom of this planet. I am willing to pay any price to ensure no one goes through the same pain that I did, Halford.”

As I said back in the draenei post, I found it a lot easier to find lightforged draenei I liked which meant it was tricky to narrow it down to just one for this post! In the end, it was Telaamon who’s dedication and speech to Halford ultimately won me over. Here was someone who was willing to pay it forward, to fight for the Alliance who had fought beside him and his people to stop the Burning Legion. He also offered a heart-wrenching comparison between Argus and Azeroth, reminding us that once upon a time that two high ranking members of the Burning Legion, Archimonde and Kil’Jaeden, were once leaders of their people – just like Sylvanas Windrunner. Had they been stopped earlier could Argus have been saved?

It was a question that clearly haunted Telaamon, and when he saw history repeating itself he volunteered to be the one to make the ultimate sacrifice. He knew it was a suicide mission and he was happy to do it because he believed in the cause that much. There could never be another Argus. Another Teldrassil.

And so there will be no more tales of Blademaster Telaamon. Instead, he will be remembered.

“My people have suffered loss and pain, struggling in the darkness that covered Drustvar. But now we have some light back. We have the means and the will to reclaim our lands from the lingering evils. Your help has brought much of that about.”

I was honestly impressed with how Lucille handled the whole being accused of witchcraft, being put on trial and put through three agonising tests thing. She took it all in her stride, and while she lost her calm at the constable in charge when he was being a complete idiot, she didn’t waste time on seeking justice. Nope, she was straight down to business and that was helping her people and finding out what had happened to her parents.

Of course, she could never have imagined that the two were connected and her mother was in fact an evil witch – no pun intended. Again Lucille showed courage in the face of danger and difficulty, preserving and seeing the witches driven from her lands. It was Lucille who went digging for her people’s heritage, the legendary Order of Embers, to fight the darkness, showing ingenuity and intelligence.

Unfortunately, I have the feeling that she will share the same fate as many expansion NPCs and we won’t see her (or any other Kul Tirans) again. I hope not because she’s someone that the Alliance could do with on their side.

“We are the equal of any of Mechagon’s troops, but our spirit and desire are superior!”

One thing I realised while writing this post is how little we interact with any actual mechagnomes on Mechagon Island. As you can imagine the entire island is populated with them (good and bad) yet most of the quests come from the visitors or the same handful of mechagnomes. While we can chat with the mechagnomes of Rustbolt Resistance we don’t ever get to know any of them. I really hope that we do get to meet them properly in future expansions.

So I didn’t have that many to choose from for this, but one that did stand out to me was Izira Gearsworn, the battle captain of the Rustbolt Resistance, who’s passion is intense and infectious. In the alternate timeline, she’s one of the few that survived an apocalyptic event and she’s still fighting. She sends players back through the time anomaly with information to help stop King Mechagon with a wry comment about their actions resulting in the alternate reality.

She’s sassy, kicks ass and gives rousing inspirational speeches to her troops; what more do you need?

“The transformation you witnessed is under my control, to be used when I see fit. I am the same person I was… and yet, something more. The use of such power makes some… uneasy. But shadow is a force to be harnessed, not feared. As with any weapon, one must maintain constant control when wielding it.”

There were even fewer choices for void elves than there were mechagnomes; two. As much as I like Master Umbric I feel like we’ve not really spent much time with him yet. That leaves the first void elf herself, Alleria Windrunner. I’ve been a fan of Alleria for a long time, long before she became a void elf and my admiration for her has just grown stronger. The way she has handled herself since becoming a void elf has impressed me, and I didn’t think she could impress me more after Beyond the Dark Portal. I literally screamed/cheered the house down when she and her husband, Turalyon, finally appeared in-game.

Thanks for joining me for the first allied race post! Hopefully, as time goes on there will be many more characters that flesh out the ranks and I’ll be able to revisit this topic again.

How about you; who is your favourite Alliance allied race character?

Next up tomorrow is the final character prompt and the sister prompt to this one; Horde allied race. I’ll probably run into the same problems with limited characters to choose from. I’ll also follow the same format, so if Alliance isn’t your cup of tea tune in tomorrow!