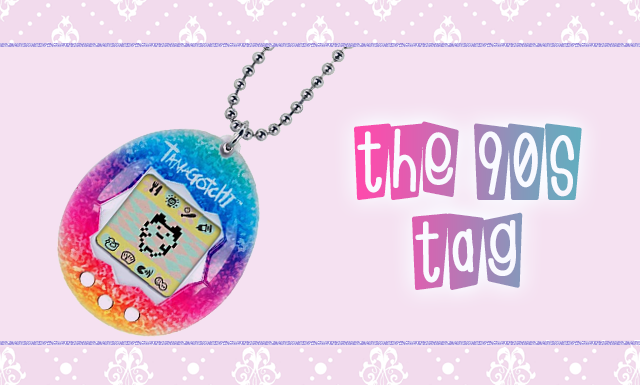 All hail the winning champion of the first Blog Tag poll! That’s right, the 90s Tag was the overwhelming winner for you guys and I can’t say I’m unhappy about that. I love nostalgia tags and this looks like a lot of fun! I only briefly skimmed the questions previously so I’ve actually no idea what I’m about to answer. Here’s hoping you’re all a kind bunch and haven’t signed me up for something awful 😉

I couldn’t find an original creator for this one and found it myself on the YouTube Society website which has a YouTube Tag list. Tags tend to to be interchangeable between blogs, YouTube and even social media now (I’ve seen people pick up tags from twitter and Instagram and do them on their blog). At the end of the day, it’s all about having fun!

Before we hop back into our time machine please take a moment to nip over to Twitter and vote in the next Blog Tag Game poll! You can also find it at the end of the post 🙂

The New Adventures of Superman, The Demon Headmaster, The Queen’s Nose, Finders Keepers, Famous Five, Round the Twist, and SMart.

For animation, it was the Legend of Prince Valiant and Animals of Farthing Wood.

Buffy the Vampire Slayer and Charmed were my favourite TV shows from the late 90s.

This one was SO hard to pick. I have a lot of 90s and 00s songs in my playlists and it really depends on my mood. In the end, though it’s gotta be this one Rotterdam (Or Anywhere) by The Beautiful South and C’est la vie by B*Witched.

I vividly remember both of these songs coming out and singing them over and over with friends. And I still know the words to both of them.

Close behind it was Truly Madly Deeply and well, any Savage Garden song, several songs by The Corrs, That Don’t Impress me Much by Shania Twain, Don’t Speak by No Doubt, Breakfast at Tiffanys by Deep Blue Something and Everything I do, I do it for you by Bryan Adams.

It’s got to be this incredible one by Honda. It was like nothing else on TV and it completely knocked all the other adverts at the time out of the water. especially when we had that ridiculous wassup and annoying frog one going around.

Neither! I’m British so for us it was Boyzone or Take That. That was our great divide. I was team Boyzone all the way and went to several of their concerts. I did prefer the Backstreet Boys over NSYNC though, I could never get into NSYNC and still can’t to this day.

Boyzone, Savage Garden and the Corrs. I literally broke my Talk on Corners CD because I played it that much.

Loads! I still collect a lot of them too. I’ve been collecting badges, keyrings and postcards since I was a kid. Back then I also collected Sylvanian Families (I had over 200), Polly Pockets, Trolls, various stickers, POGs, puppy/kitty in my pocket (I can’t believe they still exist!) and Spice Girl photos. The last two were really big in my last few years of primary school, especially when the Spice Girls debuted.

Basically I’m obsessed with collecting things and always have been. If there’s something to collect then I will collect it. It’s one of my OCD tendencies connected to my mental health.

How many Tamagotchi’s did you go through?

Although I didn’t really become a gamer until my early 20s, I used to play games at my cousin’s house. My favourite was Bomberman.

I never ate cereal as a kid so can’t answer this one!

Who was your 90’s Crush Growing Up?

What was your favourite Disney Channel movie?

So it appears that I never watched a Disney channel movie from the 90s. I’m not sure if we just didn’t get them in the UK or I just some how missed them all. That seems unlikely considering how much I used to watch the Disney Channel.

For the Disney Channel, it was Brotherly Love, Home Improvement, Boy Meets World, Honey I Shrunk the Kids, and Dinosaurs (for animated Disney shows see the question below about early morning stuff).

Nickelodeon was Clarissa Explains it all and The Secret World of Alex Mack.

Jelly Shoes by a mile. I didn’t really do fashion, never have apart from the occasional thing that caught my attention. These were one of those. What were your favourite Toys would you play with?

I went between them all, although I probably watched the Cartoon Network the most in the early days back when it showed old 60s, 70s and 80s cartoons. Before it started to get more into things like Dexter’s Laboratory, Johnny Bravo and the Powerpuff Girls.

I definitely watched Nickelodeon the least, I just was not a big fan of it.

What early morning/Weekend TV Shows would you watch?

Pretty much whatever was available on GMTV. Princess Starla and the Jewel Riders, Mighty Morphin Power Rangers, and a bunch of Disney cartoons from the 80s and 90s such as Talespin, Ducktales, Chip n Dale, Gargoyles and so on.

I had to look this one up as I couldn’t remember any and I was like, nope, don’t remember that one or that one… then I got to the Little Mermaid ones. Yessss! I remember those and I think I had most of them. Trust me to have all the Disney ones.

As I mentioned in Seriously Geeky Sundays week 7 one series that was my favourite around this time was The Saddle Club. However, that series technically started in the late 80s. My other favourite series was the Animal Ark series by Lucy Daniels which started in 1994 and I began reading and collecting immediately. I had sooo many of these books until I got older and simply grew out of them.

What would you watch when you got home from school?

Usually BBC One, I was not an ITV fan. So that meant children’s dramas like the Queen’s Nose, and then Blue Peter, Grange Hill, Children’s Ward and Byker Grove.

What was your favourite thing from the 90’s that’s no longer available today?

The cartoons from the early 90s. They really just don’t make them like they used to. I’ve not watched the new She-Ra yet, but it’s nice to see that kind of fantasy cartoon back again. Hopefully, more will follow.

They also don’t make Disney movies like they used to. That’s not a crack at live-action Disney movies, the ones I’ve seen so far I’ve loved, but they’ve been remakes of my favourite movies from the 90s. I’m not a massive Pixar fan, and other than Moana, Tangled, Frozen, Brave and the Princess and the Frog, Disney has stepped away from the fantasy genre. I realise looking through the list of films that essentially they’ve gone away from fairytales, and that’s ok, not every film has to be a fairytale film to still have the essence of Disney. I look at Hercules and Brave and see fantasy and myths rather than fairytales. That and movies filled with songs and music. That’s what I miss.

I’m tagging Winst0lf (c’mon you knew that was coming!), The Gaming Diaries, Pix, MLC, and anyone else who wants to take part <3

I had so much fun doing that tag! I also had to look so many things up, not because I couldn’t remember them but because I had to check if they were from the 80s or 90s. The TV show questions in particular were a nightmare because as I’m from the UK we got stuff so much later back then. So stuff I remember watching in the 90s was actually from the 80s.

I hope you had fun delving back into my childhood with me and thinking back to your own 90s! I was 5-10 in the 90s so for me it was a decade where I experienced a lot of different things, and by the end of it my tastes had begun to change as I’d started high school. How old were you in the 90s?

Before you go please remember to vote in the poll for the next tag!

Image Credits: Tamagotchi photo is from Amazon, Jelly Shoes photo from Next.