Small break last week due to RL getting the best of me, but I’m back this week with a transmog set inspired by my fiance’s request. He wanted an Explorer’s League style outfit for his demon hunter using the . You can view the set I made him by visiting his armory page. That led to me playing around with other items, especially leather harness-style chest pieces over shirts to get that Indiana Jones feel. The result is the expedition ready set! Expedition Ready Head / / Shirt / Chest /   Wrist / Waist   Legs / / / / / / / / END_OF_DOCUMENT_TOKEN_TO_BE_REPLACED

A crown perched atop his head, he lords over his people with an iron will, but truth be told his court is not one of nobles. No matter how many crowns he pilfers, or how big his court grows, he’ll always just be a street rat with dreams of grandeur. He’s known by many names; the King of Rogues, the King of Thieves – he is the Rat King. As you can see the idea for this set came from a story that came about as I was building the set. I used to be a roleplayer and my fiance has been playing DnD a END_OF_DOCUMENT_TOKEN_TO_BE_REPLACED

I took a few months break from #TransmogTuesday to get myself and my blog straightened out, and now I’m back with your weekly dose of moggy goodness – and a few plans too 😉 Those are secret though so you’re just going to need to wait and see! This set came about completely by accident. I wanted something badass, something awesome for the first one back and naturally my mind went absolutely blank. I ended up just fiddling around with because I just LOVE the design of this piece. It’s so Grecian/Roman, and this is the result; the Zodiac inspired Goddess of Justice. You might END_OF_DOCUMENT_TOKEN_TO_BE_REPLACED 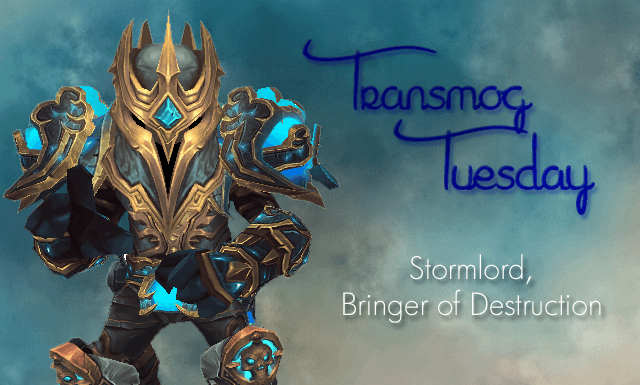 As you seen from the last few entries I’ve had a poll going to see what sort of themed transmog people would like to see. The two choices were cosplay (i.e. superheroes, characters from fiction) or themes (gods/goddesses. natures. seasonal) and themes won! I didn’t intend to start create a themed transmog this week, however, it ended up turning into one. I give to you the Stormlord, Bringer of Destruction! A storm deity who’s also a figure of death. It would have been terribly easy to do a mail set for a storm deity, naturally that was not enough of a challenge and it was END_OF_DOCUMENT_TOKEN_TO_BE_REPLACED