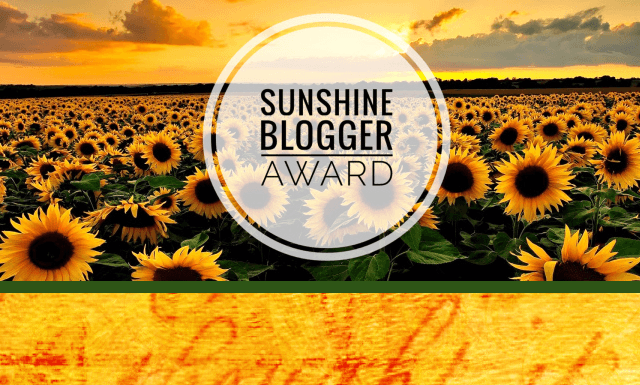 When I saw blogger awards and nominations going around I honestly didn’t expect to get nominated for an award, and that was ok; my blog has been slow and I’ve been building things back up due to my health. So not only was I shocked to get nominated once, but then a second time! Thank you so much Megan and Pepi! It really helped perk me up to know people were thinking of me and that they recognised me and my blog for inspiring positivity. While my life isn’t always a bundle of joy, I do try to use this blog to help people by talking about my life and issues I come across.

Since I’ve been nominated twice I’m going to answer both sets of questions!

The Sunshine Blogger award is a peer recognition for bloggers that inspire positivity, joy, warmth and any other emotions that you feel when you think about the sun.

I’m playing a few different ones actually. I always have at least one MMO on the go and right now that’s World of Warcraft. Alongside that I’m playing Divinity 2: Original Sin with my fiance Chris, and then on my own I’m jumping around a few other games as part of a mini-blog project.

Naturally, the next WoW expansion Battle for Azeroth comes to mind first. I don’t tend to keep up with many new games due to funds, time and a massive to play list, however, I’ve been looking forward to Final Fantasy XV on the PC. It’s a game series I’ve never played, but been aware of for years and after seeing the movie Kingsglaive I’ve been dying to know what happens next!

Divinity 2: Original Sin – while the combat is so slow (it’s turn based) and drives me a bit nuts, the rest of the game is amazing. It is so funny, yet there’s also the drama, suspense and danger too. We’re only on Act 2 and I’m loving it. I mean, a game that gives you the ability to fricking talk to animals and get quests from them?! Hell yes!

Off the top of my head I can’t think of what I would change in World of Warcraft, but I do know that there’s been a blog post rummaging around in my head for a while which is me basically putting together my ideal MMORPG using parts from all the ones I play. The fact that I always go back to WoW means that it’s more a case of tweaking than actually changing things, because otherwise I wouldn’t be back to it every time. The only major issue I have is the players themselves; toxic men being anti-female gamers, people camping quests instead of helping, or signing up as the wrong spec just to jump a queue.

World of Warcraft without a doubt. The lore is just amazing, and I love that they keep adapting things every expansion. I know a lot of people are QQing about changes, but they forget that lore is in the hands of the creators and it needs to change every now and then so the game can grow and not become stagnant. I think the latest complaint was Kul Tiran, i.e. human, druids. I’ve also met the CEO, Mike Morhaim, and he is as down to earth and as geeky as he seems; this is a company he and his friends built up from scratch from their love of gaming and their enthusiasm is still there. That in itself is a massive influence to me as a writer and content creator.

Star Wars games such as Knights of the Old Republic I and II because I lost one of the discs and for many years couldn’t play it, and then Steam did a massive Star Wars Bundle in a sale and I got them all again. We also have multiple copies of the older WoW expansions before downloads became available since we have 2 accounts and at one time a third account between us.

I am someone who is always on the go, I cannot sit still unless I’m doing something to engage my mind. So a lazy evening to me is curled up watching a movie with my fiance Chris, or reading comics or a book.

Ooh… I actually had to go count this 😀 Thankfully I started tracking this on a pinterest board a while back so it was a bit easier!

She-Ra! I still love that show and have read the recent comics. Generally most 80s cartoons are among my favourites.

Ravenpaw! I love books, and it generally just fits my entire personality. I was originally a Slotherin but a few years later I resigned up to Pottermore and got sorted into Ravenpaw.

Stuff I’m not interested in? I don’t usually feel old but Snapchat makes me feel like I’ve missed a generation. I just don’t get it at all.

I’m actually not really a fan of any of them. I know, it’s terrible. There’s probably a few of their songs that I know and that’s about it.

I have no idea how I’m supposed to answer this.. Han Solo?

Sorry, I’m not a trekkie! I really enjoyed the new movies, and that’s as far as my knowledge goes. I’m a Star Wars girl <3

Mocha, which happens to be my favourite as well – because I’m not just one thing, I’m a mixture and so you get both the sweet chocolate and the bitter coffee side of things with me.

I would scream my head off. One time when we were having wasp issues, I had the exact dream except with a giant wasp. I woke my ex up because I was screaming my head off 😀

I’m going to get some flack for this one, but sorry, I totally don’t get the Jeff Goldblum appeal!

That’s between me and Cthulhu 😉

It would probably be something geeky, like a new book in a series that has ended, something awesome in a video game or being able to star in a Star Wars film. Something that would get me excited and then break my heart when it wasn’t true.

Well this was hard because so many people have already been nominated! Here are my nominations 🙂