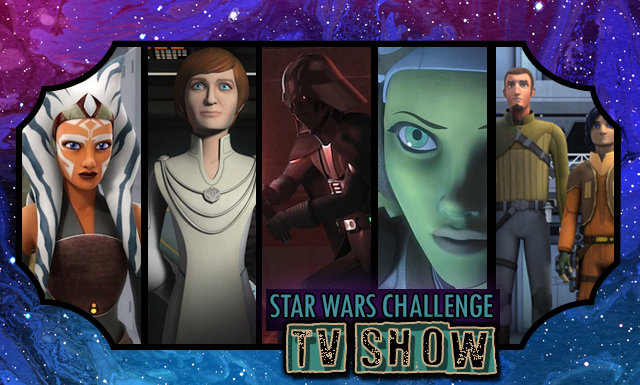 Hello and welcome to day four of my Star Wars challenge! For the next 31 days, I’ll be posting once a day with a Star Wars themed post. Some days I’ll be talking about just one thing, other days it’ll be about 5 things based on the prompt of the day.

Happy Star Wars Day everyone! Today’s prompt is ‘show’ and I’m going to be talking about 5 things I love about my favourite Star Wars TV Show, Star Wars Rebels!

This post contains spoilers for Star Wars Rebels season 1,  2 and 3, continue reading at your own risk.

As I have only watched series 1, 2 and 3 of Rebels please do not spoil season 4 for me in the comments 🙂

I’ve always been a big fan of Twi’leks so it was no surprise that I fell in love with Hera Syndulla the independent, clever and spirited Captain of the Ghost straight away. Hera is a big sister, best friend and mother all rolled into one for the rest of the crew with Kanan Jarrus as her partner (more on him tomorrow 😉 ). The two of them often had disagreements about how to handle things, especially when it came to their newest crew member Ezra, and this is one of the things that make both of them feel more real to me. As a child, you always think the adults know what they’re doing and through Hera and Kanan the adult perspective of there not being an instruction manual for life plays out. Even more so when you’re starting a rebellion against the Empire.

Hera doesn’t always know what she’s doing but she’ll always keep fighting and she knows it’s important that her crew has someone to watch their back, think about the big picture and be prepared for things go wrong. While she spends an awful lot of the time lecturing Zeb and Ezra for whatever risky stunt they just did it all comes from a place of love and determination to ensure that everyone under her command can survive the harsh Galaxy out there.

The crew of the Ghost are unique and loveable in their own ways and unlike any heroes, we’ve seen before. The Empire has just begun, the Jedi have been hunted down and branded traitors and the Galaxy has suddenly become a dark and dangerous place. The life of many people has been turned upside down and that is where Rebels finds us. So many new stories to be told and the crew of the Ghost have their own histories and baggage which brought them to the rebellion. We learn their stories throughout the show, watching as they grow together and form bonds that only strengthen when one is in a crucible.

Spotlight on the Rebellion

Until Rebels came along we knew absolutely nothing about the actual formation of the Rebellion. We saw the beginnings of it in the Prequel Trilogy and the end of it in the Original Trilogy, however, everything in between was one big blur. Rebels not only fills in the blanks, but it also does it with heart and charisma. It succinctly ties the two trilogies and The Clone Wars together while introducing a very different set of heroes.

I honestly believe that Rebels was created to fill in plot holes between the films and I’ve lost count of the times when watching an episode that I went ‘aha!’. That’s not to demean Rebels; the show is amazing on its own and in fact, the way it goes about answering these unanswered issues without making a big deal about them is part of its beauty. The biggest one for me was how could Ahsoka not know that Vader was Anakin? Until we found out that she was alive everyone close to Anakin, save for Palpatine himself, was dead and therefore, there was no one who could recognise him. Snips was not only close to him personally, but she was close to him in the Force so it was inevitable that she would recognise him.

There are so many characters that make cameos in Star Wars Rebels and then, of course, other familiar characters who play a larger role in season two. I’m talking about Rex, Ahsoka Tano and Maul from The Clone Wars. I’d not watched The Clone Wars at this point and I have Rebels to thank for getting me to watch it. After watching Revenge of the Sith and seeing Order 66 take place I couldn’t bear to watch a whole series built around the relationship of the Jedi and their clones knowing that they would turn on their Jedi Masters. However, after watching Rebels first I got to learn more about Rex and his squad. I saw his relationship with Ahsoka, heard him talk about General Skywalker (unaware that he was now Darth Vader) and found out that their squad had fought their programming. It gave me something to hold onto and I was able to start watching The Clone Wars and fall in love with it too.

I really need to watch Season 4 of Rebels, and I’m both excited and terrified to see how it finishes. While I was checking information for this post I got a few spoilers by accident and now I’m even more curious to know more. I also don’t want it to end. I still have quite a bit of The Clone Wars to go through so I may finish that first.

Are you a Rebels fan too? Who is your favourite character? Or have you got another favourite show? I know a lot of people love The Mandalorian, however until I’ve had a chance to watch it I can’t pass judgement!

Image Credits: Images are from Wookipedia.