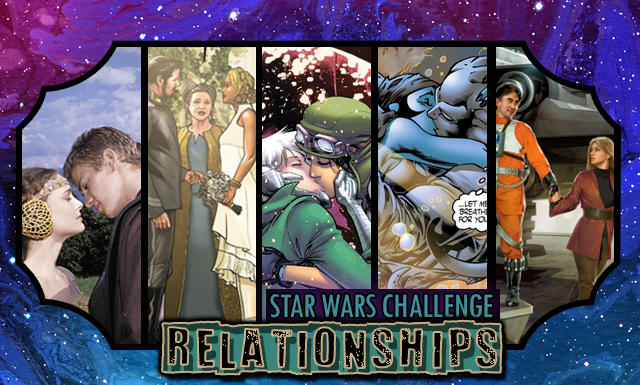 Hello and welcome to day seventeen of my Star Wars challenge! For the next 31 days, I’ll be posting once a day with a Star Wars themed post. Some days I’ll be talking about just one thing, other days it’ll be about 5 things based on the prompt of the day.

My OTP (one true pairing) will forever and always be Luke and Mara, and you can read about my love for that couple in my post about OTPs I Ship. Relationships are an important part of any fandom, whether they be romantic or platonic, and honestly, I could go on and on about this topic for every fandom I love. I’ve chosen to talk about romantic relationships today because truthfully I’m a Libra and that’s the way I lean. I’m a soppy romantic person who cries over fandoms. There, I said it.

Narrowing it down to just 5 was tough, and the 5 couples that made it through each means something to me because they’re all unique. Some had major implications for the Star Wars universe, and the people around them, and others were just beautiful to watch blossom and develop.

These are my 5 favourite Star Wars couples.

The most integral relationship to the Star Wars universe, Anakin and Padmé’s love literally brought the Galaxy to ruin. I find myself not blaming them for it though. They were two young people who were both thrown into influential roles at a young age, him the fabled Chosen One, and her a Queen. Unlike other Jedi Anakin had known another way, he was never going to be as indoctrinated as his peers and forgo a chance at love just because it was the Jedi way. After all, so many other Jedi came extremely close to breaking that rule anyway (his own Master, the next couple in this list, etc.). If it wasn’t for the rule of no attachments would Anakin have ever fallen to the dark side? Brushed it, been tempted by it, yes, but truly fallen? I’m not sure and we’ll never know.

What we do know is that these two truly loved each other and risked everything to be together. It was more than the rush of adrenaline from a forbidden tryst; it was the type of love forged under fire, tempered and refined into truth. Strong, pure and burning with passion, and that flame of passion drew the dark side like a moth to a flame. In the end, their love was just a means to an end for Darth Sidious, a way for him to make his vision of the Empire a reality.

One of the worst will-they-won’t-they relationships in the Star Wars universe, ultimately the two Jedi Masters never did their Jedi oath. However, it was clear that there was chemistry and feelings there even if they never did act on them. Their forbidden relationship was beautiful to watch despite remaining platonic as it was clear how much they each respected each other and the vows they made to the Jedi Order.

Wedge and Iella’s relationship had a rocky start with the former Corsec agent admitting her feelings for Wedge but feeling uncomfortable starting a new relationship not long after her husband’s tragic death. He had died at Iella’s own hand, killed while under the control of an Imperial Moff. Once Iella was able to reconcile her feelings of duty to Duric and move on the pair started dating, but their careers, his in the Republic Military and hers in Republic Intelligence, inevitably got in the way.  Fate intervened and the pair ended up on a joint undercover mission together. Before the end of the mission Wedge had proposed to Iella.

The reason I love this pair so much is that they fit perfectly together. Iella is a strong, independent woman with a stubborn streak and isn’t put off by Wedge’s hero status and nor does she take any crap from him. Her partner in CorSec was none other than Wedge’s Rogue Squadron teammate Corran Horn so she also knows how to handle a flyboy. They are also a couple that has a good working relationship, their skills complementing each other and bouncing off one another in the field. Their work has always meant a lot to both of them so it was always going to be important for them to find someone who felt the same way.

Sadly it’s a couple that only exists in the past, relegated to Legends status. In the new canon Wedge has married Nora Wexley, Snap’s mother. I need to play catch up to learn more about that relationship, either way, I’m going to miss this one.

I’m sure there will be comments about Disney ‘hiding’ LGBTQ+ characters away in the books and comics rather than putting them on screen, however, I’d remind people that Disney considers Star Wars to be a multimedia universe. Just because you don’t read the books and comics doesn’t mean they’re not as big a part of the franchise. For each new film, Disney produced corresponding multimedia content under the title ‘Journey to [film title]’ which was designed to provide extra content and supplement the films themselves. The problem is that many fans didn’t even realise it existed as they consider Star Wars literally to be just a movie franchise.

Anyway, I’ve digressed. My point is that even though this couple has yet to find it’s way onto the big screen it’s still a massive step in the right direction. I’ve yet to meet other LGBTQ+ couples introduced by Disney, and honestly, I think these two would probably still end up here in my top 5. They’re not here to be my token lesbian couple, they’re here because their relationship is pure passion, completely irrational and so funny in an ‘it really shouldn’t be’ kind of way.

I already introduced you to Doctor Chelli Aphra when talking about my favourite characters, and so you can imagine what a relationship with her would be like. How can someone who’s so selfish actually love someone else? It’s one of the things that makes her so interesting. Then there’s the person she’s in love with. Magna Tolvan; former Imperial officer turned Rebel, complete hardass who had chased Aphra across the galaxy and ended up falling for her. In most romantic stories the couple would have then ridden off into the sunset to join the Rebel Alliance together and fight the Empire, right? Wrong. Throw in some backstabbing, a bit of blackmail and so many other wrong turns, and you’ll get yourself somewhere near the actual version of what happened.

There’s something about the chaotic, complicated nature of their relationship and the fact that they are both completely aware of each other’s real nature – there are no rose coloured glasses here – that makes this relationship so bloody refreshing. They care about one another, neither one will change and they’re not trying to make the other one change because they know it’s impossible. It’s one hell of a ride.

Snap and Karé’s relationship features in the Poe Dameron comics, and it’s something that’s happening in the background as Black Squadron goes about their missions. There are a few snippets of conversations, such as Snap saying to Karé about wanting to say something to her before a mission about what they’ve “had for the last few months”. She interrupts him and tells him that he’ll tell her when they get back to base.

The fact that we don’t see their relationship makes it more real somehow. These guys are in the middle of the fight of their lives, fighting to reclaim their lives and the galaxy from The First Order. The times they’re stealing between missions are few and far, and whatever is between them could end at any moment if a mission goes wrong. All these thoughts and feelings are discussed in the comic and Snap and Karé eventually get married because they realise that life is for living. Whatever tomorrow brings, whatever happens on the next mission will happen. Until then, cherish what you have and hold your loved ones close. Otherwise, what are you fighting for?

Sadly Snap perished at the Battle of Exegol in Rise of Skywalker, his wife’s name on his lips as his fighter went down.

I hope you enjoyed reading about my f favourite Star Wars couples!

Which couple is your favourite?

Image Credits: Anakin and Padme Photoshoot image is from Star Wars: Fit for a Queen, Images are from Wookiepedia.