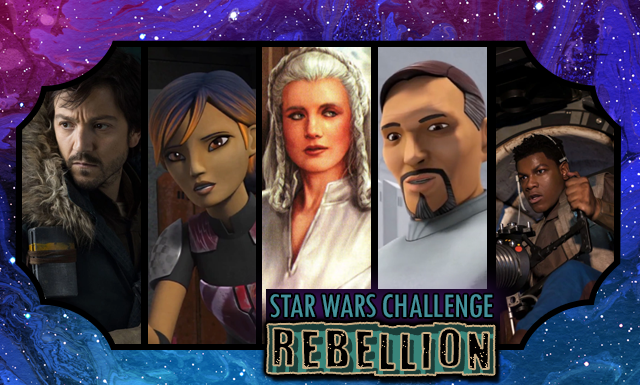 Hello and welcome to day eleven of my Star Wars challenge! For the next 31 days, I’ll be posting once a day with a Star Wars themed post. Some days I’ll be talking about just one thing, other days it’ll be about 5 things based on the prompt of the day.

We had the denizens of the Empire yesterday and today it’s time for those freedom fighters with heart, the members of the Rebellion and the Resistance.

In the Prequels we knew Bail as a senator and ultimately Leia’s father and for the most part he was often overshadowed by Padme. After her death he stepped up alongside Mon Mothma to found the Rebel Alliance. While Mon Mothma took the public role as leader, Bail was working in secret and retaining his identity as senator. He didn’t sit idle though and he risked a lot by working with Fulcrum, aka Ahsoka Tano, to help create individual cells across the Galaxy which ultimately would become the Rebel Alliance.

One thing that always stood out to me about Bail was his overwhelming kindness. He was a man of privilege and he could have easily turned his back on the Galaxy. After played Star Wars: The Old Republic and seeing the Noble Houses of Alderaan bickering and backstabbing it’s even more noteworthy. Even though SWTOR isn’t considered canon it’s still a poignant reminder that people in power usually don’t help those in need let alone create a Galaxy wide rebellion. Bail was one of the good guys and he taught Leia to do the same.

One of the Ghost’s Crew, Sabine is a Mandalorian known for her spunky attitude, love for explosives and artwork. A former Imperial cadet she chose to turn against the Empire as a young teen and in doing so became alienated from her family who stood with them. Initially, Sabine planned to make a living bounty hunting but eventually found her way on board the Ghost. As a member of the crew, she fought the Empire with explosives in one hand and her trade-mark paint bombs in the other. Using her skills as a graffiti artist she became known for implementing her art into her missions.

Although only 16 at the start of Star Wars Rebels, Sabine is headstrong, independent and fearless. She holds onto a lot of guilt for how the Empire used her to subjugate the Mandalorian people, and as a result, it takes her a long time to trust people. Those who do earn her trust also get her loyalty and fierce protection and there’s no one else you want at your back.

Cassian is a complicated character, and I’m looking forward to learning more about him in the planned Cassian Andor live-action series. He’s the first main character in a Star Wars movie who has been a member of the Rebellion from the start, and he has the scars to prove it. Unlike the heroes of the Original Trilogy, Cassian has been fighting for freedom since he six years old and it’s hardened him. While his experience means he’s good at what he does it also means he comes off as a cold and arrogant at the start of Rogue One. Underneath that hard exterior, he truly does care about people, and the Rebellion is the family he never had. He continuously puts his life on the line in the hope that one day the tyranny of the Empire will end.

It takes a lot to break the mould and go against everything you ever knew especially when you’re facing literal re-education if your superior suspects you’re thinking independently. People don’t give Finn enough credit for breaking away from the Empire in the first place. In The Force Awakens, he helps Poe Dameron escape despite a lifetime of being told that he represents the enemy and must be stopped at all cost. Maybe he’s just running on adrenaline at this point, but prior to this he’s already been thinking and Stormtroopers aren’t bred to think; they exist to take orders and that’s it.

Finn could have just walked away, faded into the Galaxy and disappeared onto some random planet in the middle of nowhere. It’s a big Galaxy. No one was going to come looking for a Stormtrooper that had gone AWOL. Obviously that would have been a terrible plot for the movie, but I’m not going meta here. I’m talking about the character and stepping up the way Finn did is pretty amazing. He has absolutely no skills apart from his big heart filled with hope and at such a dark time in the Galaxy that was something that was sorely needed.

Gradually he would learn skills, becoming a useful member of the Resistance rather than a poorly trained Stormtrooper. By the time Rise of Skywalker comes around he’s leading a tactical assault with other former members of the First Order that is essential to the mission. Finn is just an average guy who decided to step up and that is what makes him such a brilliant character. He’s not a Jedi, he’s not an infamous smuggler who made the Kessel Run in 12 parsecs or a hotshot pilot. He’s a nobody who wanted to do good.

The childhood friend of Princess Leia, Winter was often mistaken for Leia herself. The two shared an incredibly close bond and so it was no surprise that when Leia became involved with the rebellion Winter was right by her side. She was on a mission off planet at the time of Alderaan’s destruction and specialised in intelligence missions. With a perfect memory and a talent for disguise, Winter worked under the codename ‘Targeter’ and grew to be quite well known by her Imperial counterparts.

Years after the destruction of the second Death Star she was attached to Rogue Squadron and worked multiple missions with them. There she met her future husband Tycho Celchu. While primary acting as an intelligence agent, Winter also as a decoy Leia several times throughout her time with Rogue Squadron.

After the birth of Leia’s twins Winter stepped down from her political duties to take up the role as protector and caregiver for the children. Several kidnap attempts had been made, one before they were even born, and it had become obvious that the twins needed to be kept somewhere safe. As a capable fighter and skilled agent as well as close personal friend, Winter was the perfect choice. When one of the children did come under attack she was able to hold them off single-handedly through traps and ruses long enough until help came.

That’s it for my 5 Brilliant Rebel Characters, I hope you enjoyed reading about them.

Who is your favourite member of the Rebellion or the Resistance? Let me know in the comments 🙂