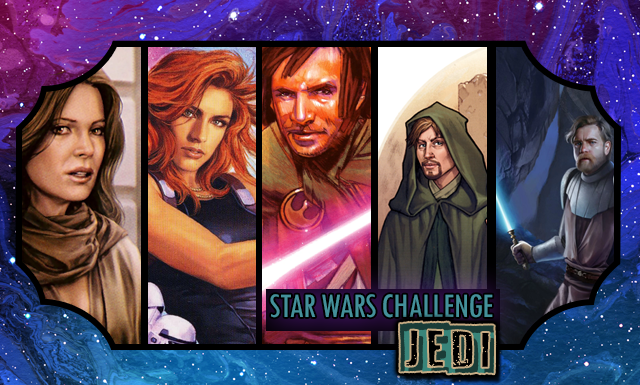 Hello and welcome to day seven of my Star Wars challenge! For the next 31 days, I’ll be posting once a day with a Star Wars themed post. Some days I’ll be talking about just one thing, other days it’ll be about 5 things based on the prompt of the day.

I’ll be honest this is one of the prompts I’ve been waiting for since I started this challenge. Every time I wrote about characters I was storing most of these guys and girls for this post, and it has been painful to limit it to just 5! I really wanted to break that limit and go for 10 again like yesterday’s Star Wars books post, but I don’t have the energy to keep that up. Instead, check out the honourable mentions at the end 😉

Here are my top 5 Jedi characters from the Star Wars universe!

This post is going to contain spoilers for many of the books I spoke about yesterday so if you intend to read them at any point and don’t want to be spoiled then stop reading now.

Anyone who knows me knows that my favourite character of all time is Mara Jade. There was something about the fiery redhead that didn’t care for Luke’s heroics and farmboy charm, who instead of being happy to see the hero of the rebellion blamed him for ruining her life. In The Thrawn Trilogy continued we learned more about this strange woman and her past as the Emperor’s Hand, a force-sensitive assassin answering only to him. His final order to her was to kill Luke Skywalker and she tried and failed to do that on Jabba’s sail barge under the alias of a dancer. When the second Death Star was destroyed, and with it her Master, Mara felt his death.

Left with nothing and running from her enemies, Mara proved her resilience time and time again eventually ending up in the employ of Talon Karrade where a fateful meeting led her right to Luke Skywalker. It was only when she was able to kill Luke’s clone (long story) that she was able to finally free herself from her Master’s final order and move on with her life. The former assassin reinvented herself yet again, training at Luke’s Jedi Academy and after fate through them together the pair fell in love. Mara would go on to become a Jedi Knight and then a Jedi Master; not bad for the former personal assassin of Darth Sidious right?

Not much is known about Mara’s past save for her being chosen from a young age to be trained as an Emperor’s Hand. Her past has been a blessing and a curse, and naturally, the former Emperor’s Hand marrying the son of Darth Vader was a big deal. Despite the pressure, Mara handled it with grace and managed to find time out of wedding stress to even help change someone’s life for the better. That’s just who she is. She’s kind, passionate, but make no mistake she’ll kick your ass in a heartbeat. She’s most definitely the ying to Luke’s yang which is what makes her such a perfect partner for him. Mara’s the first person to dive headlong into trouble even while pregnant something that almost has deadly consequences for her during the Yuuzhan Vong war.

She has some of the best one-liners in the Expanded Universe and if you’re looking for someone to dish out the snark then look no further. Mara will always say it like it is and often to the bad guy’s face. Overall she’s a badass fighter with multiple tricks up her sleeve, loyal to those who care for her and her loved ones, and a danger to anyone who hurts them.

I said yesterday that I’d be gushing about Corran, so here it is. Other than his fascinating family history he’s a Correllian. Correlians are known for their charming, rebellious, devil-may-care nature (Han Solo is the most infamous of all). Prior to becoming a Jedi Corran was a Corsec agent and a member of Rogue Squadron, the elite starfighter team, and he was one of the best. A hotshot pilot, Rogue and Correllian, Corran didn’t do anything by half and often acted regardless of his own safety. If something needed doing then he’d get the job done one way or another.

He excelled in everything he did, and that is one of the reasons he struggled so much under Luke’s tutelage at the Jedi Academy. As a member of the Halycon family, Corran had a weakness when it came to telekinesis and could never master the same techniques as his fellow apprentices. While he would go on to gain adequate skill it was an area he would never master. In I, Jedi, he quits Luke’s academy in frustration to carry on his training alone and overtime Corran’s powers in manipulation and the mind exceed other Jedi.

The Jedi of Luke’s Academy differ from the Jedi in the Prequels in one big way; they have personal attachments. Corran’s family is extremely important to him and his relationship to them and those around him are a big part of who he is. His wife Mirax is his entire world and when she goes missing he destroys everyone in his path to find her. Despite his passion, Corran maintains a strict code of honour and always has. He followed his father and adopted grandfather into Corsec, and then his grandfather’s footsteps as a Jedi Knight and Master. He struggled to come to terms with his father-in-law’s underworld activities, however, their mutual love for Mirax and then their children/grandchildren won that battle.

Corran has some dark times yet he always manages to maintain his cocky personality and humour. He exists as a link between many different aspects of the Star Wars universe; Correllian Jedi, Corsec, Rogue Squadron and the Jedi. But he’s so much more than just a link or a plot device, and his quick-witted remarks, devil-may-care attitude is something I really miss.

The only daughter of Han and Leia, Jaina Solo has always been my favourite Solo kid. There was always so much more depth to her than her brothers and it wasn’t because she was a woman, or due to being the only one left standing. Jaina was trained as a Jedi yet had the mechanical skills and love for the Falcon just like her dad. She was happy to become a Jedi but knew she could also be more if she chose to do son. During the Yuuzhan Vong war that’s exactly what she did and she followed in her uncle’s footsteps to join Rogue Squadron.

As a child, Jaina and her siblings have often hidden away from enemies that wanted to either seize the power of Vader’s lineage for themselves or kidnap them because their mother was chief of State. This led to Leia and Jaina growing further apart, the result of necessary precautions but it cost them a lot of years. They found each other again as Jaina grew older and began to recognise herself in her mother, and this is something that I can relate to. Like Jaina, I had a similar experience with my own mother as a child, and though it was no one’s fault it did cause us to become emotionally distanced. As an adult, I was able to close that gap.

When knighted as a Jedi Knight the Force spoke through Luke and he named Jaina Sword of the Jedi, a mantle and destiny full of loneliness and pressure. Jaina’s seen the dark side, lost people she cared about, lost her self in a hive mind and even after all that there was more tragedy to come; her twin fell to the dark side. As his twin and the Sword of the Jedi, she did what she had to and defeated her brother in a duel, ending his reign of terror.

Kyp Durron is one of the few Masters on the Jedi Council that has truly fallen to the dark side and he has a huge body count to his name. Rescued by Han Solo and Chewbacca from the spice mines of Kessel, Kyp had been imprisoned there since a young age by the Empire. His life had been difficult and filled with anger the teenager was easy pickings for the spirit of Sith Lord Exar Kun. Influenced by the Sith Lord he stole a superweapon and went on a killing spree, destroying multiple Imperial targets. He racked up a body count that included his own brother before Kun was banished.

Despite being under Kun’s influence Kyp was well aware of just how much of his own actions were his and that the anger that fuelled them had been his. His path to redemption began then and he rose to become one of the best students Luke ever had, then one of the first Jedi Masters.

As a Jedi Master Kyp is unique among his peers. His previous experience with the dark side and life has shaped his world view and he often has a much darker, practical view about what the Jedi should do. He fully believes that the force should guide their actions and has absolutely zero patience for diplomacy. He abhors the idea of the Jedi Order being used by the Republic and believes that the Jedi should stand apart to govern themselves. He doesn’t mince his own words, he’s impatient and arrogant and sometimes the Jedi need someone like that. Kyp’s headstrong nature balances out the careful pragmatism of his fellow Masters, offering a perspective that they often don’t consider.

Obi-Wan is the only character from the movies or shows to make this list and it isn’t that I dislike Jedi from them; I just like these characters more. Five is a really small number when you’ve got two canons and over 30 years of multimedia to consider. So what makes Obi-Wan so special? There is just something about the mixture of charm, cheek and skill that makes Obi-Wan epic. Ewan McGregor’s portrayal blew me away in the Prequels, however, I love every scene with Obi-Wan in The Clone Wars just as much.

Then there’s the fact that he’s rumoured to have slain a Krayt Dragon single handedly… but that was just a myth, right?

As for Rey and Leia, I’ve talked about them before when discussing my favourite Disney Heroines 🙂

How about you; can you narrow it down to just five favourite Jedi? Who would be at the top of your list? I’d love to hear your answers in the comments 🙂