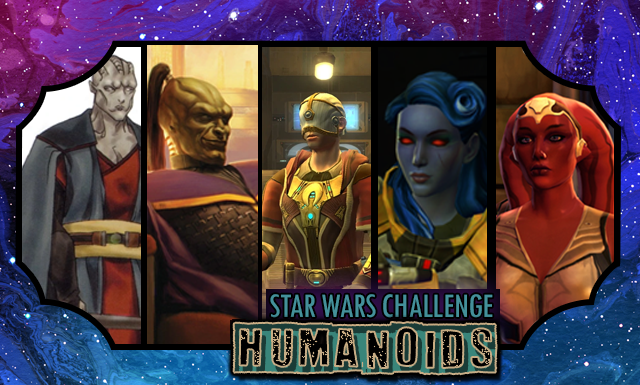 Hello and welcome to day twenty-one of my Star Wars challenge! For the next 31 days, I’ll be posting once a day with a Star Wars themed post. Some days I’ll be talking about just one thing, other days it’ll be about 5 things based on the prompt of the day.

We’re changing it up a bit with the next few prompts, swapping planets for their inhabitants. First up are humanoid species. With such a huge galaxy in Star Wars, there are various individual human species, such as Hapans, Alderaanians, Correlians, which I’ve mentioned throughout this Star Wars challenge. Personally I consider those to be more akin to races or cultures rather than separate species so I’ve chosen to leave them out of this list.

A few of the species on this list will look familiar, others less so, and all of them I feel are the epitome of what makes Star Wars so diverse and interesting.

Read on to find out more about the 5 Humanoid Star Wars Species that you need to know about!

“Those of your world use pheromones to addle the minds of others.“

From the moment I first met Prince Xixor in Shadows of the Empire, I found the Falleen interesting. I’m really glad that they were made canon and included in The Clone Wars. A reptomammalian species they have the ability to secrete pheromones which they used to influence others, often without them knowing. It’s a very useful talent for gamblers, politicians, spies and criminals. The Black Sun crime organisation has been ruled by several Falleen during its long history.

“They claim to see on a higher plane than we do. You know, the whole Force thing? Makes me nervous.“

The Miraluka are a force-sensitive species that look human with one exception; they have no eyes. They use the force to see, and this means that they can tell if another force user is a Sith or a Jedi with just a glance. Many Miraluka joined the Jedi Order over the centuries, with those without formal combat training taking on teaching or administration roles within the Order.

It was unusual for them to become Sith as their cultural beliefs were so incompatible with Sith teachings. Like any force user, they were not immune to the dark side though, and a handful of Miraluke Sith have been reported in the past. During the Jedi Purge, their species was almost wiped out by the Emperor, and as a result, Miralukans joined the Rebel Alliance.

“My people, the Twi’leks, have an ancient and rich history of non-violence. We prefer intellect and cleverness to outright brutality.“

Known for their beauty and grace, Twi’leks are often seen as dancers, slaves and arm candy for the rich and criminal elite. There’s so much more to their species and their society, and I’m grateful to The Clone Wars and Star Wars Rebels for taking the opportunity to show more about them.

The most distinctive physical feature of a Twi’lek is their lekku, appendages that sprouted from the crown or base of the skull. Also referred to as headtails, they had multiple uses in Twi’lek society. In Twi’lek’s native language of Ryl was a combination of spoken word and subtle movements made by their lekku, and larger or multiple lekku was considered a sign of status in Twi’lek society. They were also extremely sensitive and could be used to incapacitate a Twi’lek easily. If enough damage is done to the lekku it can cause lasting brain damage.

“I’m the only person in Khomm’s recent memory who has done anything… unpredictable.“

A thousand years ago Khommites perfected the art of cloning long before the rest of the galaxy. Considering this a sign that their society had reached perfection they stopped reproducing and began to clone only the ‘perfect individuals’ of their society. Their society remained unchanged for the next millennia until one of their clones was revealed to be force-sensitive. They considered to force-sensitivity to be ‘an undesirable fluke’ and despite every attempt to remove it from their species they failed. Dorsk 81, the 81st clone of Dorsk, was born force-sensitive and trained to become a Jedi.

“The Chiss do not simply accept alien concepts without careful consideration. We certainly do not submit to domination. By anyone.“

The mysterious species of Grand Admiral Thrawn first appeared in Heir to the Empire and it was several books later that we would eventually learn more about the blue-skinned aliens. The Chiss have a completely alternative way of looking at things compared to the rest of the Galaxy, as seen by Thrawn’s own actions multiple times. In their society they are taught from a young age that it is not the person that matters, rather it is the position they hold. Jagged Fel, a human who grew up in Chiss society, explains; “individuals must allow themselves to be subsumed into the role society expects them to play. If you asked for someone by name, they would on principle not talk to you. If you asked for them by rank, however, they would not hesitate.”

As a result, they are highly disciplined, especially their military, accepting orders from a superior without question and carrying them out no matter what. Their entire society was also state-run, which meant that most Chiss had no concept of money or trade because everything was provided for them by the state. Even their clothing styles were dictated by social status, whether that be their House or position in the military.

Much of their society and disciplined behaviour is accredited to the harsh environment of their planet. Once a warm tropical paradise, Csilla underwent a brutal ice age which required the Chiss to become so disciplined and self-sufficient if they wanted to survive. While that was several millennia ago, their society continues to follow the precedents set during that dark time.

I hope you enjoyed learning about some of my favourite humanoid species! Tomorrow I’m going to be talking about alien species, and you can probably guess at least one of them (I already mentioned my love for them previously!).

Were you familiar with any of these species before today’s post?

What is your favourite humanoid species?

Image Credits: Chiss and Twi-lek screenshots are from my personal screenshot collection, Other images are from Wookipedia.