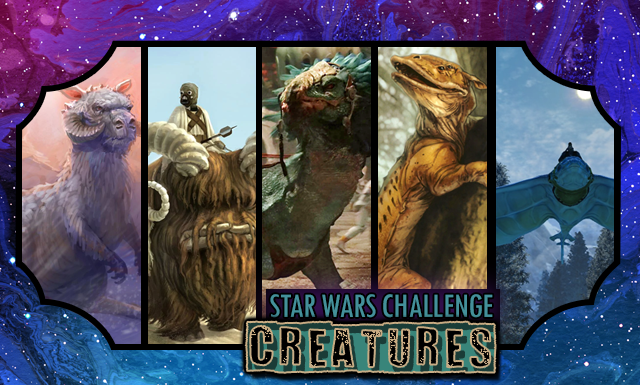 Hello and welcome to day twenty-three of my Star Wars challenge! For the next 31 days, I’ll be posting once a day with a Star Wars themed post. Some days I’ll be talking about just one thing, other days it’ll be about 5 things based on the prompt of the day.

Anyone who knows me, or has been reading this blog for a while, knows that I love animals and creatures. I’ve said it before and I’ll say it again, I’d happily open a reserve and adopt everything. If you ask me what I’d want to hatch from an Easter Egg I wouldn’t be able to just pick one. Every time we watch a movie or play a video game I ask my fiance if I can have the cute creatures we see. It’s become a running joke with us 😀

Naturally, as I love Star Wars, play Star Wars: The Old Republic and love creatures there are a bunch of Star Wars creatures that I’m obsessed with. Narrowing it down to just 5 was tough. Remember I said yesterday there were no Porgs in it? I don’t hate the little guys, they just didn’t quite make the cut.

Find out which ones did by reading on to see which 5 Star Wars Creatures I’m Obsessed with!

Most of my screenshots of Alderaan from Star Wars: The Old Republic are of these beautiful creatures. They soar gracefully through the sky out in the wild and exist as taxies that players can ride between outposts. They look so peaceful and majestic, their great wings beating against the air.

The first moment Obi-Wan appeared on Boga, his varactyl mount in Revenge of the Sith, I was in love with these vibrant coloured creatures. It wasn’t just the way she looked or my love of reptiles, it was the way Boga moved. She was unlike anything I’d ever seen before. There are multiple sub-species in Star Wars: The Old Republic in the wild and available as mounts. I’ve not bought myself one yet because I still can’t decide which one I want. /facepalm

I have an obsession with banthas and every time I see one in a Star Wars movie or Star Wars: The Old Republic I start repeating the mantra ‘bantha bantha’. I’m not sure exactly what it is about these shaggy woolly mammoth-esque creatures, I just like them. I really need this bantha plushie.

Despite the grisly introduction to tauntauns in The Empire Strikes Back, I love these cuddly guys. Yep, they smell bad, but just look at their cute faces! Again, Star Wars: The Old Republic is at fault for helping this obsession along and I have to call out to every tauntaun I see.

This obsession I think is completely justified and you’ll be glad to know it’s not because I think they’re cute. Ysalamiri emit a Force repelling bubble. Inside that bubble the Force cannot be used because everything inside it is cut off from it. They can be utilised as a weapon to defend against force users, hide from them or interrupt the flow of the Force during rituals or procedures. Grand Admiral Thrawn was a big fan of these little guys and use them frequently.

While the Ysalamiri has appeared in the new canon, they only appeared as sculptures in Thrawn’s office in Star Wars Rebels. Whether they still have the same properties as their expanded universe counterparts is unknown, and it’s quite possible that their inclusion in Thrawn’s office was simply just a nod to Thrawn’s origins in the Thrawn Trilogy by Timothy Zahn.

Either way, these little guys are really cool, and while they’re a complete pain in the ass for Jedi I think it’s interesting and useful to have something that exists, especially naturally, that levels the playing field for non-force users.

That’s a wrap on galaxy inhabitants! If you’re not tech-inclined than tomorrow’s ship prompt is right up your alley.

How about you, what Star Wars creature is your favourite?

Image Credits: Thranta image is from my own personal screencap collection, Varactyl screencap is from Star Wars screencaps, All other images are from Wookiepedia.