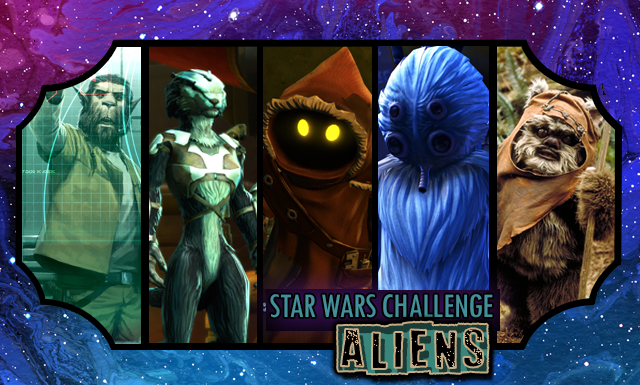 Hello and welcome to day twenty-two of my Star Wars challenge! For the next 31 days, I’ll be posting once a day with a Star Wars themed post. Some days I’ll be talking about just one thing, other days it’ll be about 5 things based on the prompt of the day.

Yesterday was humanoid alien species, and today is, well, alien species. Confused? I chose to go by Wookiepedia’s definition of what was considered a humanoid species and what was considered a sentient alien species. I was surprised to find that some species are listed as humanoids, and others are listed as alien, but hey, it was a hell of a lot easier to go by their categories than try to work it out myself. Tomorrow’s prompt is ‘creature’ and so I’ll be concluded the inhabitants mini-set of prompts with non-sentient aliens.

For now, here are 5 Star Wars Aliens that I think are amazing!

“Ewoks have a difficult time separating fact from myth. This may be the great strength of their society.“

Of course, these little guys are top of the list! It isn’t necessarily the cuteness of the Ewoks that attracted me to them (although it doesn’t hurt either!), it’s their fierce spirit. From the moment we first met them in Return of the Jedi it was clear there was something special about them. They have such big hearts and are absolutely fearless in taking down the Empire. No one ever expects the small cute creatures to do the most damage, and I’ll always be here for that.

“They only want to be left alone. The droids attacked them, and I’m afraid our outpost got caught in the middle.“

The strange, ferocious-looking Talz were often seen as vicious primates by those who didn’t know better. As Obi-Wan Kenobi and Anakin Skywalker found out during The Clone Wars they were a race of hunters who simply just wanted to be left alone, to live their lives their own way. As they were unable to speak Galactic Basic, the Talz were not able to communicate these wishes themselves which often led to conflicts. They weren’t vicious in nature, they were just completely different from the rest of the galaxy and sometimes the way they saw things was refreshingly uncomplicated.

“My people, t”Republic, Empire… politics mean nothing to Selonians. We fight because you invade our home.“

One of the native species of the Correllian system, Selonians lived in large groups underground and their communities (dens) were similar to insect hives. Most Selonians were infertile females, with one in every hundred Selonians being male. Fertile females were one in every five hundred and were known as Queens. Each den had one Queen and a few males. In Selonian society, males were not considered important as their only role was to breed with the Queen.

Selonians were a very inclusive race, keeping to themselves and caring only if their homes were invaded. Anyone who made the mistake of stumbling into their territory didn’t live to tell the tale. They often appeared friendly to other species when trading or working with them, however, this was simply because their current objective aligned with the good of the den. If something didn’t help their den then they weren’t interested.

As each den is made up of family members Selonians are extremely protective of their society, and they do not just defend it from outsiders. An emphasis is placed on the needs of the whole den rather than the individual, and that the actions of one individual impacted them all. Therefore, lying was considered to be as bad as murder.

“You have to understand that Bothans think in terms of political and persuasive influence, not military power. The typical Bothan’s goal is to go through life getting more and more people to listen to what he has to say.“

The first time Bothans were mentioned was in Return of the Jedi. They were the allusive spies who had gotten hold of the second Death Star plans, allowed the Rebels to destroy it above Endor. The Bothans were eventually introduced properly in Heir to the Empire, and remained a staple in the Star Wars expanded universe (and usually a pain in everyone’s ass) until Disney took over the canon.

Bothans are masters of intelligence, spycraft, and politics, and they rub everyone up the wrong way. They are some of the most arrogant people you will ever meet, but they are damn good at what they do. Their culture is so filled with backstabbing that most Bothans are perpetually paranoid, and the rest of the galaxy doesn’t trust them. Their entire society is based on the philosophy of putting their own political and economic interests about everything and everyone else’s success, so it’s easy to see why that may be. When they are on your side they’re single-mindedness and refusal to be beaten means they’re great allies – provided they don’t get a better offer.

““Stripped. Not destroyed. The Jawas steal. They don’t destroy.“

I’ll be honest, I was never really interested in Jawas until I played my bounty hunter in Star Wars: The Old Republic. Yep, I fell in love with the little squeaky Blizz. I also learned a lot about Jawas. Seen as the galaxy’s scavengers they’re actually incredibly clever little monsters. They do scavenge everything; if it’s not tied down then a Jawa will get it.  But they’ve got a great eye for useful components and they’ve got the skills to make things out of them too.

They’re the best tinkerers and if you befriend on they show their gratitude by gifting you with things they’ve made. To a Jawa it’s pointless to give someone something that just looks pretty so they study and research, giving a heartfelt gift that’s actually useful.

What is your favourite alien from Star Wars?