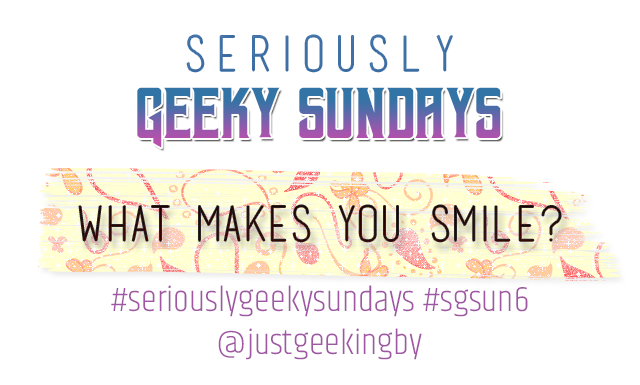 How is it the final week of May already? That’s two months of Seriously geeky Sundays gone by, and it’s been absolutely amazing so far. I’ve met some amazing new people, and gotten to know more about some great ones I already knew <3 Here’s to June and even more geeky fun it brings!

There’s a lot happening in the world right now, a lot of horrible things, and it really doesn’t feel like there are a lot of things to smile about right now. It’s National Smile day today and there’s not going to be many people smiling today for many reasons. One of the most important things about the geek community is its ability to come together at times like these and show support for one another. Being a geek transcends boundaries, and that’s what I’m going to think about while I answer these questions.

What makes you smile?

What TV shows do you love?

I mostly watch fantasy/sci-fi, supernatural, superhero and crime TV shows, and anything that combines those genres is even better! I’m a big fan of British TV Shows, so Doctor Who, Vera, and Shetland are among some of my favourites. I’m a massive Arrowverse fan and love all of their shows, although Flash and DC Legends of Tomorrow are probably my favourites! I will try pretty much any crime show once.

I have an odd relationship with historical and comedy TV shows. Historical ones I enjoy, I just have to be in the mood for and when I am I’ll binge-watch them for a few months before moving on to something else again. Comedy TV Shows I can’t watch on my own. My fiance Chris is a huge comedy fan and if he’s watching something I’ll end up watching it with him. It’s why I’ve seen and enjoyed most of Scrubs, however, I’ve never sat down and watched it all the way through and probably never will.

If you’re interested in what TV Shows I’ve watched and/or currently watching check out my Currently Watching page.

What are your favourite movie genres?

Compared with TV Shows I’m pretty broad when it comes to movie genres. I’m still not a big fan of comedy, but I watch more comedy movies than I do TV Shows. I also tend to watch chick lit films, romance and other genres I don’t really look at anywhere else. Generally speaking, though I’m an action, adventure, historical, fantasy/sci-fi and superhero girl at heart when it comes to heart and anything Disney is always a big yes!

To see what movies I’ve been watching head over to the Currently Watching page.

Ha, ok how to sum this one up in a paragraph or two… I mostly read urban fantasy, fantasy and sci-fi, although I do have a fondness for classic literature as well especially Victorian. I love spin-offs so if there are novels or comics set in one of my favourite fandoms I’ll read them too. Mostly these tend to be Star Wars or World of Warcraft, but I’ve also read a bunch of Doctor Who novels too (they’re fantastic by the way!).

As for comics, I’m mainly a DC girl although I’ve been exploring more comics in the last few months. I’ll pretty much read anything that fits into the genres I just mentioned and has a good plot!

Asking me my favourites is a massive rabbit hole so if you’re curious then my Currently Reading page has a list of book series I’ve finished and I’m currently working my way through. You’re also welcome to check me out on GoodReads!

I’m primarily a video gamer although I do enjoy board and card games too. Chris is mostly the tabletop gamer in our house and he introduced me to them and continues to do so.

Video Games wise I mainly play MMORPGs for two reasons. First, I play with Chris most of the time so MMORPGs are one of the easiest ways for us to do that and second, we both like games that are constantly adding new content. As much as I love other games I get to the end and want more every time. Story and characters are more interesting to me than challenge modes so I don’t often replay games, I also simply don’t have the time and energy to waste doing something I don’t find fulfilling.

You’re welcome to check out my Steam account and my Grouvee account to see what sort of games I like, as well as the Gaming section here at JGB.

What geeky thing made you smile this week?

It has been a hard week for me mentally and physically, and one of the bright spots for me was catching up on the Star Wars Adventures comics. The Ghosts of Kashyyyk story features Chewbacca and Terbus, one of the Porgs Chewie picked up on Ahch-To, fighting the First Order on the Wookie home planet Kashyyyk. I don’t normally show full panels from a comic, however, in this case, the best way to explain what was so epic about this story is to literally show you.

As Chewie heads into the forests of Kashyyk on a mission Terbus follows him, and as you can see from the first panel the Wookie still isn’t that impressed with his little Porg follower. He’s on a mission and he hasn’t got time to deal with the little guy following him about, so he heads up a tree to scout, probably thinking that the Porg can’t follow him. What made me smile was the stubborn little Porg’s grumpy face as he realises what Chewbacca did and that if he wants to keep up with the Wookie he’s going to have to scale that big tree. The wroshyr trees are huge to Wookies, so you can imagine how massive it was to the tiny Porg!

But he does it! He makes it all the way up there to sit next to Chewie, and the little expression on his worn-out face 😀 It’s just comics gold. Can it get better? Yup. It does.

The rest of the comic is absolutely fantastic, however, it was this concluding panel that tore at my heartstrings and made me smile even more. The little Porg had been with Chewie throughout his mission and they both found a middle ground. He’s helped fought the First Order and he’s ready for more! I hope we get to see more stories of Chewie and Terbus in the future 🙂

What quote always makes you smile?

I had a nice wander through some of my favourite quotes from books which I have listed on GoodReads (have a nosey here), and there’s a whole bunch that make me smile (and smirk) a lot. However, this one is just a complete masterpiece.

I need to give you a little bit of context first though. It’s from the Iron Druid Chronicles by Kevin Hearne, and the last druid Atticus can speak telepathically with his hound Oberon. As a dog, Oberon has a rather unique way of looking at things sometimes…

Oberon: What’s silly is paying five bucks for hot milk and flavored syrup! But now I see what’s really been going on all this time! They charge you all that money because they need it for the R & D! Somewhere on the outskirts of Seattle, there’s a secret facility with higher security than Area 51, and inside there are men with poor eyesight and bad haircuts wearing white coats, and they’re trying to make the Holy Grail of all coffee drinks.

Oberon: No, Atticus, I already told you those exist! I’m talking about the prophecy! ‘Out of the steam and the foam and the froth, a man in white with poor eyesight will craft a liquid paradox, and it shall be called the Triple Nonfat Double Bacon Five-Cheese Mocha!’

Atticus: Oberon, what the F—?”

This is from Hammered, book 3 of the Iron Druid Chronicles, and if you liked the sound of this I highly recommend the entire series because it is filled with amazing witty dialogue and hilarious Oberon/Atticus discussions just like this. The first book is called Hounded.

The link-up opens on Sunday 31st May 2020 and will remain open until Wednesday 3rd June (GMT time zone).

Once again thank you to everyone who has made the last two months of Seriously Geeky Sundays an absolutely amazing experience! As we head into June I look forward to reading more geeky answers, getting to know you guys more and meeting any newcomers.

If you’re just hearing about Seriously Geeky Sundays it’s not too late to take part! The link-up is open for a few days for anyone who isn’t able to post on a Sunday. You can find the full list of questions here.