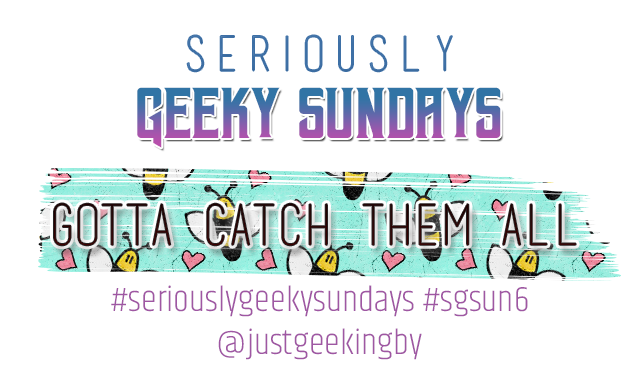 If the title didn’t give it away or you’ve been living under a rock since the 90s, this week’s Seriously Geeky Sundays theme is brought to you by Pokemon Day. Every year on 27th February fans worldwide celebrate the original release of the first game back in 1996 in Japan and even if you’re not a Pokemon fan you can’t deny the effect that this game has had on pop culture. This week we’re not just talking about Pokemon, we’re looking at that effect and the cultural phenomena of Pokemon.

This is the last week of February, but never fear March’s themes were released last week and in case you missed it here’s a handy link to them again 🙂

Gotta Catch Them All

How familiar are you with the Pokemon franchise?

Not very to be honest. It’s my fiance, Chris, who is the big Pokemon fan and everything I know I’ve learned from him. As Pokemon games are console games I don’t tend to play them, on occasion I may watch him play them, otherwise, I’ve only played Pokemon Go and that was brief.

There have been various augmented reality games and pet battle features in MMOs since Pokemon was released, have you played any?

This is much more my cup of tea. I like the idea of pet battle games – just not as the whole reason for a game. I love the pet battles in World of Warcraft and put a lot of effort into my pet collection and pet battling in general, however, for me it’s just another element of the game.

A well-known one of these is Neopets; did you ever play Neopets?

Yep! I actually just went and made a new account to see if I can gain access to my original one. It’s still there and is 19 years old! I put a lot of time and effort into it, and really enjoy/ed Neopets. Unfortunately, I lost access to the account years ago when I changed my email account so I can’t just change the password. So fingers crossed the support team can help me out!

A new pet battle game has just been announced for a big franchise; which one do you hope it was for?

It can only be Star Wars for me. In the MMORPG Star Wars: The Old Republic there are collectable companion pets like in World of Warcraft, however, there is no pet battle system. The pets range from miniature droids and starships to adorable baby tauntauns. There is such a massive variety of creatures in the Star Wars universe that it’s just begging to be made into a pet battle game.

What smaller fandom would you personally create a game like this for?

I’m not sure if this necessarily counts as a smaller fandom considering how popular it is, however, it’s certainly smaller than a massive franchise like Star Wars; Rick Riordan’s Percy Jackson and the Olympians universe. Bringing the myths and folklore of Greek and Roman mythology into the modern era, these book series’ have a wide array of mythological creatures and monsters. It would similar to a Pokemon game where you need to beat another ‘trainer’, in this case, a bad guy with a team of monsters to progress through the game and complete your quest.

Pick a creature from fandom and tell us what it’s battle abilities would be!

I’ve had She-Ra on the brain recently so I’m going to pick her epic steed Swift Wind!

Tempest – Swift Wind flaps his wings to cause wild winds that damage the enemy.

Spirit of the Unicorns – Calling upon the magic of all unicorns Swift Wind receives a buff to all stats for two rounds.

Thanks for reading today’s Seriously Geeky Sundays post and I hope you enjoyed reading all my pet battle rambles!

What about you guys; are you a Pokemon fan?

Image Credits: Neopets image is from Neopets.com, Porg Screencap is from Wookiepedia.