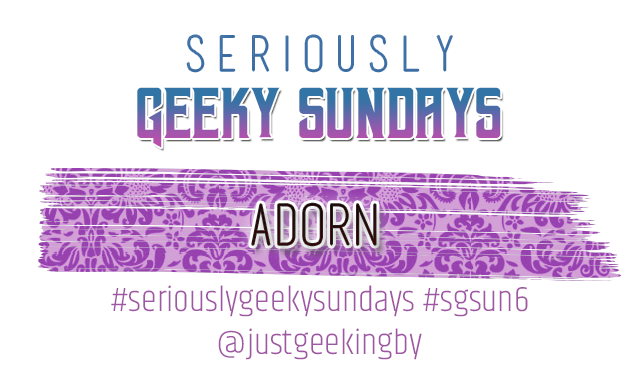 Last month I talked about the inspiration behind this week’s Seriously Geeky Sundays theme, old art project called Adorn, Decorate and Embellish,. We were talking about visual locations with Embellish, and this month Adorn brings us to costumes! I’ve always been interested in costumes and fashion to a degree even if I don’t keep up with it myself. It started with a school project looking at changing fashions throughout history. Anyway, onto the fun part; talking about costumes in fandom!

If you signed up for Secret Santa you’ll be hearing from me today with your match! 😀

If you could steal any character’s wardrobe which would it be?

To be fair I’d probably steal all the (women’s) clothes from this show as every single one of their female characters has amazing wardrobes! However, it’s Miss Lena Luthor who tops the list with her elegant power suits and sophisticated style that I wish could emulate even just a little. She never has a hair out of place even in the middle of a catastrophe, and whether she’s at a business meeting or in the lab she looks amazing.

What superhero’s costume do you love and which do you hate?

I hope this question was as much of a pain to answer for everyone else as it was for me! Only teasing 😉 It’s really hard to think of a costume you love without separating it from the hero and their story. In the end, I went with Batwoman’s costume simply because of visuals like this one. It’s not just the suit; it’s the combination of the suit and red wig. While Batman is dark and brooding, Kate’s suit is vibrant and screams ‘I’m here, come and get me’/ ‘I’m here, I see you and I’m coming for YOU’.

There’s just something gorgeous and stunning about it that has always made me look at in awe. I’m super excited for Javicia Leslie as Batwoman and her new suit looks awesome.

As for one I hate, I’m going to keep it in the family, well the Bat-family; it’s gotta be Robin’s costume. The generic Robin costume is too bright, too gaudy with mismatching colours. Damian Wayne’s costume is a bit better as it has darker shades in it, but typically Robin’s costume is really bright and it just looks wrong to me.

You’re riding into battle; who’s armour do you choose?

I would like an armour that offered protection both physically and magically while also allowing me to engage in a range of movement. For those reasons, I’d choose the armour of Tyrande Whisperwind, High Priestess of Elune and leader of the Night Elves in World of Warcraft.

Who wore it better; pick an outfit that’s been worn by multiple characters and tell us who wore it best.

I was struggling to come up with one that wasn’t one of the usual suspects and then suddenly realised I was missing a really obvious and easy one; the Green Lanterns. Each lantern corps has a pretty standard uniform and every member makes it their own slightly. So who wears it better in the Green Lantern Corps? Well, that’d be Jessica Cruz in my opinion.

While she’s the only female human lantern, she’s not the only female lantern by a long way so it’s certainly not because of her gender. There’s something sleek and stylish about the design she’s chosen. The green top and plain black legs, with a glowing tattoo over her eye to remind people that she’s got that otherworldly power. It’s also great to see her look so confident in her uniform too as Jessica suffers badly from anxiety and that didn’t magically disappear when she became a Lantern. Sometimes looking good can give you that boost of confidence, and is a whole other power in itself.

From utility belts to magical backpacks, accessories in fandom can be anything and do anything. Which one would you choose to borrow for a day?

I would choose to borrow a druid amulet from one of the druids in Kevin Hearne’s Iron Druid Chronicles series. Their amulets have charms connected to them which provides them with various powers, but the one I’d be most interested in would be the shapeshifting one. The ability to shapeshift into several animals for a day sounds marvellous!

You’ve been given the chance to redesign a character’s appearance? Who is it, why and what would you change?

Yup, it’s the Robin costume 😀 I explained my reasons why above so I’m going to move straight onto the changes I’d make. First of all, I’ve no idea where the original designer got these colours. They look nothing like any breed of Robin and there are a lot of them. The overall style isn’t great, but each Robin has changed that depending on their choice. This image is of Jason Todd, the second Robin, and is very similar to the one worn by Dick Grayson. The next two Robins, Tim Drake and Damian Wayne, made a lot more changes to how it looked.

It’s the colours that really annoy me as it feels as though they just wanted to make a super bright sidekick to stand out against Batman’s darkness. In one of the most recent comics, it was mentioned that Robins use their bright colours to do something but it’s slipping my mind exactly what that was, and I recognise that also played into the costume design. However, you can still have a bright costume without it looking like a clown costume.

Several breeds of robin are either yellow and blue, red and blue, or blue and black. Changing the suit to those colours and maybe adding a tertiary colour as a highlight rather than another block colour would still ensure it remained bright, just stylish rather than a gaudy Christmas tree.

Well, that pretty much ended up as a superhero/DC special edition of Seriously Geeky Sundays with a few special guest stars, whoops! I hope you enjoyed it nonetheless 🙂 Keep an eye out next week for December’s questions!

What is your favourite costume?

Image Credits: Lena Luthor image is from Supergirl Fans.org, Batwoman, Robin and Greenn Lantern images are from the DC Database.