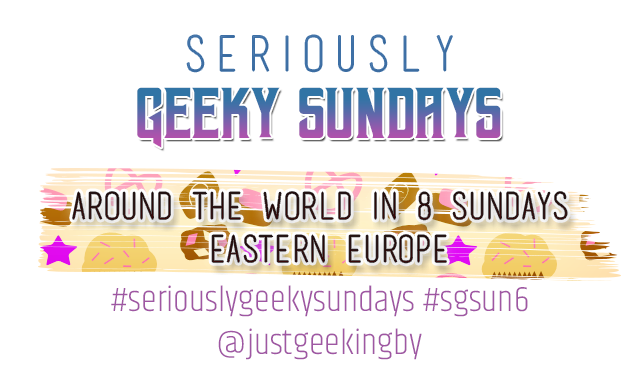 Welcome to week 30 of Seriously Geeky Sundays! Way back in April when I started this prompt I did not expect to be here 6 months later, and be here celebrating week 30. Nor did I expect to be in the second week of a multi-week theme! You guys have been an inspiration and I want you to know that. Thank you for making this possible.

This week we move eastwards to the second half of Europe, a huge continent I divided into two to give us our 8 visits on our world tour. Eagle eyed participants may have noticed that there are only 5 questions instead of the usual 6 this week. An oversight on my part as I was busy putting preparitions in place for Secret Santa Sign ups, woops!

Secret Santa is a free event that will be happening for Christmas for anyone who wishes to take part. The only qualifier is that you need to have participated in at least one SGS prompt prior to signing up. If you haven’t joined us for an SGS yet you’ve still got plenty of time to so so as sign-ups are open until 8th November. You can join in any of the upcoming weekly themes or a past theme that you found interesting and didn’t have time to take part in at the time (see the FAQ).

So what exactly is the event? If you’re familiar with Secret Santa you’ll know that it’s a secret gifting exchange. Don’t worry, no one is expecting you to buy a gift for anyone. As stated this is a free event. The gift you will be giving in your capacity as Santa is a set of questions designed specifically for another SGS participant.

You’ve been reading each other’s answers for most of a year now, and have been getting to know each other, forming an amazing community, becoming so much more than I could have ever imagined. I think you guys will have a lot of fun this.

I am aware that this may seem a little daunting as well. I wouldn’t have suggested an event like this if I felt our community wasn’t a safe and welcoming group. I will be on hand for you all to run your questions by me, ask advice, be there for you to bounce ideas off of, and generally anything else. As the head elf in charge with a list of everyone’s names, I won’t be taking part.

Contact me privately via direct message on the social media of your choice or email me with the following:

If there’s something you feel I need to know, such as you’re going to be unavailable during the event period (8th – 29th November) or there is someone you would rather not be paired with for any reason (positive or negative) then please let me know. I don’t need any details, I just want to ensure that this is a comfortable and fun experience for everyone 🙂

Around the World in 8 Sundays [Eastern Europe]

Who is your favourite character of Eastern Europe heritage?

Arkady Kolcheck from NCIS: Los Angeles is my favourite character from Eastern Europe because he is such a character and chaos always ensues whenever he is around. A former KGB agent who defected after working with the NCIS: LA team, he is a former adversary of their boss Hettie and remembers the old days as she does. Now he’s a rich Russian guy who lives his days in the sun in LA, buying and selling information. He’s the go-to guy for the NCIS: LA team, although dealing with him is never simple. He’s just a funny guy, who can also be serious when he needs to be. His facade hides his real personality, especially his feelings for his daughter who didn’t get to see grow up.

While I was really impressed with The Man from U.N.C.L.E which I watched a few months ago, my favourite film has to be Van Helsing starring Hugh Jackman and Kate Beckinsale. While it is very Hollywood and stereotypical, it also does a wonderful job of showcasing the region beautifully.

In Hollywood characters of Eastern European descent are often stereotypically cast as the villain, can you think of a hero instead?

While there were a couple of superheroes on the tip of my tongue as well as Arkady’s daughter Anna, I’m actually going to for someone a bit different this time. Those familiar with Richelle Mead’s Vampire Academy series will know who I’m thinking of; Dimitri Belikov. The strict Russian guardian who trains Rose to be better at her job so she can keep her best friend safe ends up going down a much darker path than anyone ever expected, and yet he remains a true hero.

Greek mythology frequently features in pop culture, which appearance has interested you the most?

I’ve been fascinated with Slavic folklore, and in particular the tales of Babushka and Baba Yaga for quite a while now. Baba Yaga is beginning to feature in more and more Western fandoms, however, I’d love to see more of a focus on Slavic folklore as a whole. It’s one of those folklores that is as old as time yet is overlooked so often.

Which Eastern European country or location do you feel is overused in pop culture and which is underutilised?

Russia and Transylvania, which was made even more obvious by the fact that I could only really think of those two when coming up with answers for this week’s questions! Even though Eastern Europe also includes Greece, I still find myself struggling to think of many greek characters other than mythological ones such as DC’s Amazons.

Thanks for reading the 30th week of Seriously Geeky Sundays! If you’ve not joined us yet then there’s no better time to do so 🙂 I’m also here to answer any of your questions if you have any.

Do you find it difficult to think of characters and fandoms set in Eastern Europe? Would you like to see more?

Tags: eastern europe, fictional locations, folklore, lost girl, ncis:la, secret santa, seriously geeky sundays, slavic folklore, vampire academy, van helsing
2020-10-25
Previous Post: Book Review: 4 Horror Anthologies to get you in the mood for Halloween!
Next Post: Join me for a World of Warcraft Challenge in the lead up to Shadowlands!