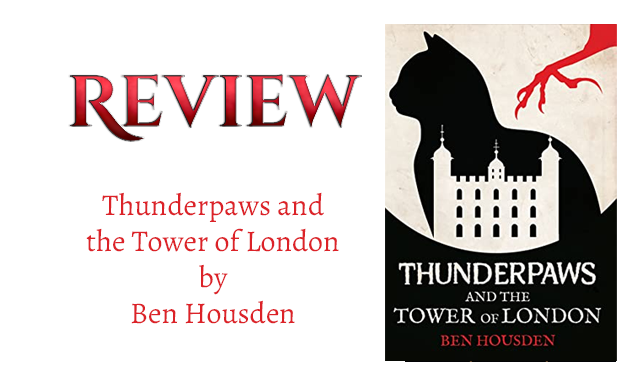 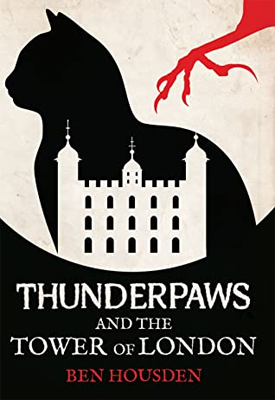 Category: Book Reviews
Author: Ben Housden
Genres: Cats, British, Fantasy, Ghosts
Series: Nature's Claw
Series Number: 1
Page Count: 272
Publisher: High Gate Press
Illustrator: MonoKubo
Life as the foremost feline at the world famous Tower of London is not as glamorous as it sounds. The governor wants him out, the ravens are tricking his whiskers, and there are more scheming Royal ghosts than is healthy for anyone. Teufel has his paws pretty full already, but deep within this ancient landmark are mysteries darker and more frightening than he could ever imagine… – is it too late for Teufel to claw his way out of the danger closing in on every side? Is our hero about to become dog food? Or could it be, as the mouse said, that Thunderpaws is destined to save the world?

This book was provided for free by NetGalley and the publishers in exchange for an honest review. Many thanks to NetGalley and High Gate Press for the opportunity to read this book.

While I love animals, and cats in particular, I’m not a huge reader of books about animals, especially not with them as the protagonist. I was admittedly hesitant about picking Thunderpaws and the Tower of London up because I wasn’t sure whether a book from the perspective of a cat would actually work. Just because something sounds good on paper doesn’t necessarily mean it works in execution. I’d had a few books that had missed their mark entirely before I picked this one up, and so it was a pleasant surprise to find that the concept didn’t just work, it ended up being a brilliant read!

Thunderpaws and the Tower of London tells the story of Teufel, a vicar’s cat who ends up having his entire world turned upside down when his humans move to the Tower of London. His vicar has become the new Chaplain of one of London’s most famous tourist’s attractions, which means absolutely nothing to Teufel. He’s just concerned that everything’s changed, and as he’s prepared to make his mark on his new territory, he makes a horrifying discovery; the Ravens rule the Tower. Even worse, the humans treat them like royalty.

But this isn’t just another version of Sylvester and Tweetie Pie. It turns out that Teufel’s mum was a church cat, and what he thought that meant is a completely different thing to what it actually meant. Soon Teufel’s up to his whiskers in ghosts, plots and high treason. With his entire world turned upside down where birds are in charge and a mouse is not only not cowering from him, but actually having conversations with him and stealing his food (!), Teufel has to work out what is going on, who’s telling the truth and which side is the right side before it’s too late.

Beautiful illustrations add to Housden’s comedy genius, depicting scenes that will have you giggling and shaking your head in amazement. Cat lovers will love the little nods to catitude that sum up life with a cat perfectly. Just keep this one safe away from any fluffy paws, so they don’t get any ideas… 😉

Ben Housden was born to teenage parents in the throws of revolution in the white-hot electric-cool of rural Shropshire, England. Turning one, he was the youngest resident of the University of Essex and part-time watchman of a café in a caravan. Aged three was hippie communes, marauding north London. He moved to Yorkshire at four – to bring on the revolution. Great adventures followed as an agitprop theatre roadie, budding entrepreneur and bus-fare dodger. Aged eight, he moved to a stately home, unfortunately to an asbestos hut around the back and a job glass-collecting in the student bar. A village of humungous pies came and went. A city next. Sheffield Steel. A failing education was ignored (Jackie Collins’ for your English Literature book project anyone?), university failed. Record company, nightclub, investment banking (not as a banker), broken, light, copywriting, a friend said: ‘I’ve got this story… a cat at the Tower of London.’

You can browse his books on Goodreads. Or connect with him on social media; he’s on Twitter!

Thank you for taking the time to read my review for Thunderpaws and the Tower of London.

Do you have an animal companion? What sort of chaos do you think they would get up to at a London tourist attraction? Let me know in the comments 🙂