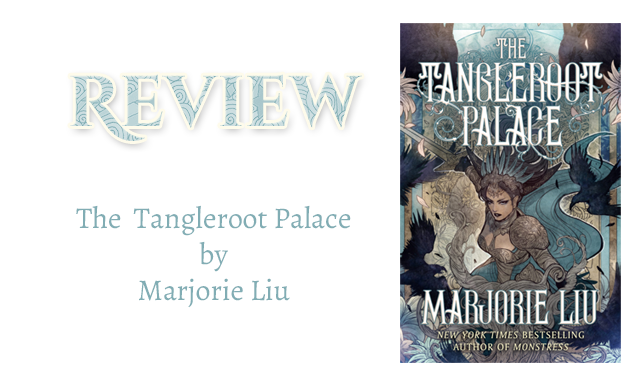 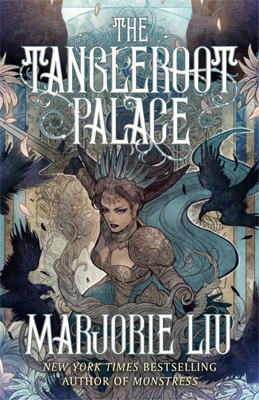 Category: Book Reviews
Author: Marjorie M. Liu
Genres: Anthologies and Short Story Collections, BIPOC, Fairytales, Fantasy, Horror, LGBTQ+, Magic, Paranormal, Urban Fantasy
Series: Dirk & Steele
Page Count: 256
Publisher: Tachyon Publications
New York Times bestseller and Hugo, British Fantasy, Romantic Times, and Eisner award-winning author of the graphic novel, Monstress, Marjorie Liu leads you deep into the heart of the tangled woods. In her long-awaited debut story collection, dark, lush, and spellbinding short fiction you will find unexpected detours, dangerous magic, and even more dangerous women. Briar, bodyguard for a body-stealing sorceress, discovers her love for Rose, whose true soul emerges only once a week. An apprentice witch seeks her freedom through betrayal, the bones of the innocent, and a meticulously-plotted spell. In a world powered by crystal skulls, a warrior returns to save China from invasion by her jealous ex. A princess runs away from an arranged marriage, finding family in a strange troupe of traveling actors at the border of the kingdom’s deep, dark woods. Concluding with a gorgeous full-length novella, Marjorie Liu’s first short fiction collection is an unflinching sojourn into her thorny tales of love, revenge, and new beginnings.

It was a short story that first introduced me to Marjorie Liu’s writing so when I saw there was a collection of her short stories coming out The Tangleroot Palace was swiftly added to my TBR. It was the book’s gorgeous cover, designed by Sana Takeda, the artist, Liu collaborated with on her comic series Monstress, that initially caught my eye. Isn’t it stunning?! It’s the perfect fit for an anthology of work that is absolutely sublime. Read on to find out more!

This book was provided for free by NetGalley in exchange for an honest review. Many thanks to NetGalley and Tachyon Publications for this opportunity!

I have been trying to get my hands on more of Marjorie Liu’s writing ever since I read one of her short stories in an anthology years ago. What I didn’t realise until I looked out what one it was, that it was actually ‘The Tangleroot Palace’ in Never After. It was a novella, not a short story, and the same novella features in this anthology, hence the name. I find it a rather amusing coincidence that it’s brought me back to Liu’s writing once again even if completely unintentionally on my part. I don’t remember much about the story off the top of my head so I’ll be re-reading it again and that’s usually when my memory kicks in and I go ‘ah yes, I remember this now!’. What I do remember is that it left a huge impression so as soon as I saw this anthology up for grabs to review I hit the apply button.

Many years after the anthology I met Liu again in the Star Wars fandom and again was amazed by her writing in the Han Solo series. I have no doubt that this anthology is going to be brilliant.

There are six short stories and one novella in The Tangleroot Palace and each one varies in theme and genre but a fairytale element runs through the entire anthology. It isn’t your typical fairytale though, it’s alternative and unique and if you’re at all familiar with Marjorie Liu’s work you’ll understand what I mean by that. If you’re not then you’re in for a treat because no one spins a tale quite like Liu. As I expected I did recall ‘Tangleroot Palace’ as soon as I started reading it and I was happy to read it again because it remains one of my favourite novellas.

At the end of each story, Liu discusses the origins and inspiration for each story, naming the anthology that each one originally appeared in and the premise she was given for each one. I really enjoyed these notes from her, the author, because it was so interesting to see what she had done with an idea and where she had pieced it together with something else she had seen/read/heard about.

As with all my anthology reviews, I’m going to go through this story by story and give my thoughts on each – don’t worry this will remain a spoiler-free review 🙂

Sympathy for the Bones

This was a very dark story to start the anthology off with and I found it to be a hard slog to get through. At times it felt as though it was repeating itself, and it was, by design.  It’s one of those stories that you need to wait until the end to get the full impact and let the pieces fall into place.

The Briar and The Rose

I loved this fabulous LGBTQA+ “retelling” of Sleeping Beauty. I hesitate to call it a retelling because while it uses some of the elements of Sleeping Beauty and Liu herself does say it is a retelling it’s so unique that it could stand on its own. This is one of my favourite stories in the anthology because it’s so rich with flavour and storytelling.

There is so much pain and trauma in this alternate history story where superpowers exist and Liu navigates these difficult topics with a skilful hand. It’s a story of legends, of heroes and what someone will do for the people they love. It’s about what makes someone who has walked away from war once return to the fight again. The title may be call her savage, but by the end of this one, you’ll realise it’s the story itself that is savage.

The Last Dignity of Man

Following on from a story about superpowers comes one that questions our belief in superheroes alongside a story about happiness and scientific breakthroughs. What happens when we put our faith in the belief that there is someone in the world that epitomises true good, true heroism? How do we compare? Sometimes at the heart of faith like that is just a lonely person who needs someone to believe in them, not a hero.

Where The Heart Lives

Another favourite of mine from this anthology, Liu explains that this story is essentially a prequel to her Dirk & Steele paranormal romance series. Set a few hundred years before that series this story tells how one of the namesakes of Dirk & Steele meets their partner and learns about the paranormal. It’s pure magic and it’s one of those stories that makes you look at the world in a different way.

If the previous story was a prequel to the Dirk & Steele universe then this one is almost a sequel as it’s set in the far future after an apocalyptic event has wiped out a lot of humanity. It’s a little uneasy to read and wasn’t easy for Liu to edit for the anthology she explains, due to the recent pandemic but like the rest of the stories, it’s terrific. It doesn’t dwell too much on the details of what happened so it’s not triggering, and the plot details will keep your mind firmly on what is happening in the story, not on anything else.

As I started reading this novella and began to remember it I smiled. It was like remembering a familiar fairytale or watching a childhood film for the millionth time. That comforting feeling, that grin you get when you get to the twist in the story because this time you know what’s coming and it’s just as fantastic as the first time. This time I paid more attention to the details and having read Liu’s introduction at the start of the anthology and the other stories I noted familiar themes. I’m sure if I read it again in a few years I’d notice even more things; it’s a story with so many layers and I’m sure different people will get something else from this. It’s got that magical fairytale charm to it.

The Tangleroot Palace was, as I expected, brilliant. Each story was unique, wonderful and magical, weaving fantasy and reality together to create stories that although set in fantastical worlds with monsters and fairytales at their core have something we all recognise; people. Even in the darkness of ‘Sympathy for the Bones’ we can recognise parts of ourselves, and that is what makes Liu’s writing so compelling.

Marjorie Liu is an attorney and New York Times bestselling novelist and comic book writer. Her work at Marvel includes X-23, Black Widow, Han Solo, Dark Wolverine and Astonishing X-Men, for which she was nominated for a GLAAD Media Award for outstanding media images of the LGBTQ community. She is also the co-creator of Monstress from Image Comics, which has won multiple Hugo Awards, British Fantasy Awards, the Harvey Award, and five Eisner Awards, making Liu the first-ever woman (and woman of color) to win an Eisner in the Best Writer category. She teaches comic book writing at MIT

You can find out more about her work over at her website. You can browse her books on Goodreads. Or connect with her on social media; she’s on Twitter and Instagram!

Interested in more books by Marjorie M Liu? Check out a selection of titles in my store.

Thank you for reading my review for The Tangleroot Palace. It’s released tomorrow and if you’re a fan of fantasy, fairytales or just good storytelling then I really recommend picking this up as you won’t be disappointed.

For more great books, including the Dirk & Steele series by Marjorie Liu on audiobook, check out Scribd the world’s original online reading subscription service. You can sign up using my referral code and get 2 months of free reading right now!