The Last Graduate (The Scholomance #2) by Naomi Novik Book Review 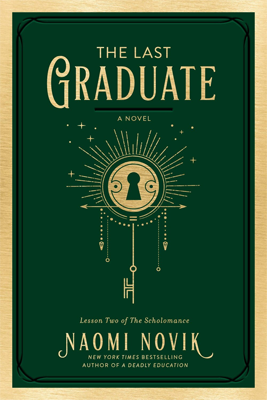 Category: Book Reviews
Author: Naomi Novik
Genres: Dark Fantasy, Fantasy, Magic School
Series: The Scholomance
Series Number: 2
Page Count: 368
Publisher: Del Rey
At the Scholomance, El, Orion, and the other students are faced with their final year—and the looming specter of graduation, a deadly ritual that leaves few students alive in its wake. El is determined that her chosen group will survive, but it is a prospect that is looking harder by the day as the savagery of the school ramps up. Until El realizes that sometimes winning the game means throwing out all the rules . .

One of my most anticipated books of the year, it’s time to step back into The Scholomance for our second lesson for The Last Graduate by Naomi Novik!

This book was provided for free by NetGalley and the publisher in exchange for an honest review. Many thanks to NetGalley and Del Rey for the opportunity to review this book!

The Scholomance is a school filled with monsters, there are a lot of battles against monsters throughout the book. Some are awful, some are just weird and disgusting, and yes, there are some deaths along the way. It’s a dark fantasy book. There is also reference to a major catastrophic event outside the school resulting in untold deaths, which means the topic of grief (including survivor’s grief) is explored.

The first book (or lesson as the books in this series are delightfully called) of the Scholomance series, A Deadly Education, is one of the best books I read this year (my review is here). It also ended on a HUGE cliffhanger. Thankfully, I read it as part of my preparation for the Del Rey Virtual Showcase which introduced me to the publisher, and ever since I’ve been crossing my fingers for an ARC. When my approval came through, I may have squeed a little, and if I’d had any energy, you would have most certainly have seen me dancing around the room.

Let’s start with the title; the extremely ominous “The Last Graduate“.  In the first book we were introduced to the dark and, quite frankly, murderous magic school called The Scholomance which has no teachers, is filled with monsters and is completely run by magic. If you don’t do your homework, it turns into something deadly and hunts you down. Why would anyone go to such a lovely school? Because there are even more monsters outside it, and this was the best system the magic world could come up with to keep kids safe.

Every year, the eldest kids graduate by completing one final test; a huge gauntlet where all the monsters live. The weakest part in the school’s defences is right by the way OUT, and they have to leave because new students enter to take their place. There isn’t any room or food for them to stay. So it’s a life or death race to leave, to graduate. So that begs the question… if this book is called the “last graduate”, what on earth is happening in this book to make that so?! What does El realise that means throwing out all the rules?! And how does the massive cliffhanger at the end of book one fit into all of this?!

Oh, my stars. This is going to be one rollercoaster of a book, and I’m also realising that if El and her friends are graduating in this book – what is going to happen in book three… because this is a trilogy?!

The Last Graduate picks up directly after the first book. El is still standing there, holding the piece of paper she was given at the end of the first book, and I like that Novik chose to do this rather than skip time, as most authors do. We got to see El’s reaction straight away, got to know what she was feeling at that moment rather than hindered with any hindsight, and I don’t think it would have worked any other way. Everything about The Scholomance is in the moment. Hindsight is for survivors.

As suspected from the synopsis, everything changes this year and El is thrown through a loop by the school. She’s given a horrible study schedule, and then this amazing study period that seems like it’s too good to be true which of course, it is because this is The Scholomance. Nothing is ever for nothing in here. As she tries to keep up with her studies, normal Scholomance life, planning for graduation, teenage life and on top of it the bombshell her mum landed in her lap, El finds herself trying to unravel the fun new rubbish the School is throwing at her.

Then, she slowly begins to realise that the School doesn’t do anything without a purpose…. and her and her friends end up taking on a massive task that no one has ever done before. Is it really throwing out all the rules if the School is on your side?

In the first book, the idea of the Scholomance and how horrible the entire system was didn’t quite hit home. In this one, something happens outside the school and the students have to come to terms with realising that they have no way of knowing what they’re walking back out into. They know something has happened, something terrible, and for all they know the world outside could be falling to pieces. They are completely isolated in The Scholomance without any communication with anyone outside, save for the new students that enter, and they have just come in with the bad news. For El and her friends they’ll find out when they graduate, however, all the younger students have a year or more to find out what is happening. During their time in The Scholomance anything could happen to their family, and they wouldn’t know until they leave. It’s just as terrifying for their families, though, because they have no idea if their children are even surviving inside the school, and yet they have no choice because outside the school it’s too dangerous. The world Novik has created is terrifying.

I loved the first book in this series, I didn’t think it would be possible to love the second any more… I was wrong. The characters develop even more in The Last Graduate, and I loved the friendship between El, Aadhya and Liu. In the first book their friendship was tentative, an alliance for graduation rather than a friendship, and in The Last Graduate they grow closer. They begin to let their guard down around each other, and trusting one another with secrets and fears. El struggles with abandonment issues throughout the book, but her friends stick by her, and Novik’s dialogue during these conversations is both poignant and witty as Aadhya whips up some sass to convince El that they’re not going anywhere for the third time;

“Stop it!” she said. “I think that’s like the third time you’ve asked to be ditched. You’re like one of those puffer fish, the second anyone touches you a little wrong you go all bwoomp,” she illustrated with her hands, “trying to make them let go. We’ll let you know, how’s that?”

The sarcasm in book one was fantastic, in The Last Graduate it’s been refined to a fine art and I love it. This is a book for everyone who loves sarcasm, for the people who roll their eyes and say “really?” or walk into rooms and walk back out of them again while muttering “you’ve got to be joking…”.

The one thing I wasn’t quite sold on in this book is the romance. I think it’s because I spent most of the book analysing the love interest and trying to work out what was going on. I think I was thinking far too much about it when it was a lot simpler than I was imagining. Normally I tend to fall for the romance hard (I’m a Libra, after all), and I felt it more for the secondary characters than I did for the main characters.

At the Del Rey Showcase, Novik said that we would hate her even more at the end of this book. That was an accurate assessment. If you thought the first cliffhanger was bad, this one is even worse.

What more can I say? A fantastic book, one hell of a cliffhanger and oh goodness please give us the next book quickly?! It’s been a long time since I’ve been this caught up with books that I’ve had to handle a cliffhanger, normally I’m years behind, and so I just move onto the next one! No agonising wait.

Considering how The Last Graduate has ended, the third book is going to be explosive in a lot of ways. It’s going to be one hell of a book and I can’t wait.

An avid reader of fantasy literature since age six, when she first made her way through The Lord of the Rings, Naomi Novik is also a history buff with a particular interest in the Napoleonic era and a fondness for the work of Patrick O’Brian and Jane Austen. She studied English literature at Brown University, and did graduate work in computer science at Columbia University before leaving to participate in the design and development of the computer game Neverwinter Nights: Shadow of Undrentide. Over the course of a brief winter sojourn spent working on the game in Edmonton, Canada (accompanied by a truly alarming coat that now lives brooding in the depths of her closet), she realized she preferred writing to programming, and on returning to New York, decided to try her hand at novels.

Naomi lives in New York City with her husband and six computers.

Interested in more books by Naomi Novik? Check out a selection of titles in my store. You can find the other books in the series here!

Thanks for reading my review for The Last Graduate, the second book/lesson of The Scholomance series by Naomi Novik.

Have you read the first book of The Scholomance? Let me know in the comments 🙂

For more great books, including Naomi Novik’s Temeraire series, check out Scribd the world’s original online reading subscription service. You can sign up using my referral code and get 2 months of free reading right now!