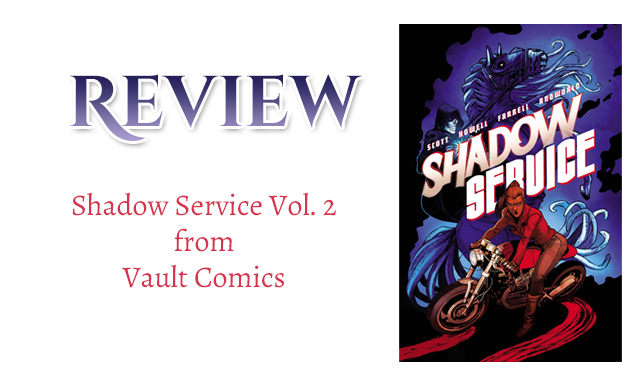 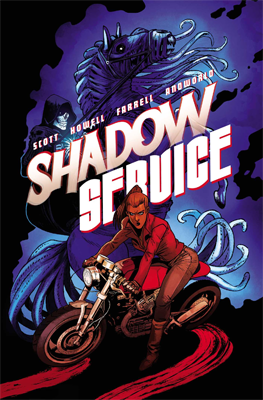 Category: Comic Book Reviews
Author: Cavan Scott
Genres: Comic Book, Angels and Demons, Horror, Urban Fantasy, Witches
Series: Shadow Service
Series Number: 2
Page Count: 128
Publisher: Vault Comics
Illustrator: Corin Howell, Triona Farrell
First Gina was a witch. Then she was a spy. Now she’s a traitor. Spycraft meets witchcraft in the world of MI666 BLACK MAGIC MEETS BLACK OPS. Betrayed by one of their own, the Shadow Service takes to the dangerous streets of Rome. But can the traitor be brought back into the fold? The chase is on. Spycraft meets witchcraft in the world of MI666. Collects #6 to #10 of the ongoing series.

Many thanks to Jamie-Lee at Black Crow PR for the opportunity to review the second volume!

If you’ve read the first volume of Shadow Service and were impressed, hold onto your seats because things get even better in volume two! In the first volume we were introduced to the MI666 team and other people in Gina’s life, however, we only learned the origin story of one of them; Coyle. In this volume we learn how Gina met Edwin the rat and Quinn, and the origin story of agent Aashi, as well as the illusive MI666 leader Hex. There’s still much more we still need to know about Hex, but we are given the basic information about who he is and where his supernatural life began.

Shadow Service Vol 2 delves much deeper into everything and as you’d expect there are a lot of plot twists which bring even more questions just as we get some answers. The wonderful artwork from volume one continues, with Corin Howell and Triona Farrell’s work growing stronger with each issue. There are some stunning scenes in the later issues as the two artists really get to dig into London’s supernatural world, bringing the demonic and the celestial to life. One thing I love about this series is the moody colour scheme and grungy textures, and they fit so well alongside Scott’s writing. They both add layers to the story which you can only get in the comic/graphic novel medium.

Scott takes us on an emotional rollercoaster as we follow Gina as she tries to work out where she belongs; is it on her own, with Quinn who has helped her out before or with MI666? The problem is that she’s no longer an obscure nobody and London’s underworld has begun to notice her… can she get away with fading back into obscurity and going back to chasing after cheating partners again? (Does she even want to?). As with volume one, Scott’s writing is on point, and the nice tip of a hat in acknowledgement to the British public who have had to live with Tories making a complete hash of things during the pandemic will go down well with many readers. It’s a scene that would not have been out of place in a Constantine issue, so if you’re a Constantine fan, then I’d suggest giving Shadow Service a shot.

The volume ends with a huge openly for the next one, and I can’t wait to see where it goes. I have so many questions!

Thanks for reading my review for Shadow Service Vol. 2! I hope you enjoyed it, and I’d love to hear your thoughts 🙂

Have you read any of Shadow Service?