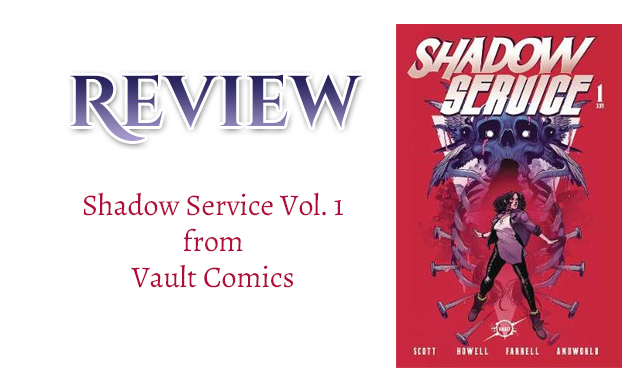 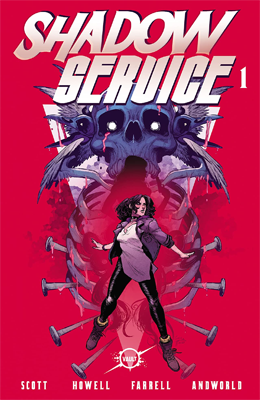 I became a fan of Scott Cavan’s writing in the Star Wars adventures comics, so when free copies of Shadow Service Issue #1 and later Vol 1 were offered in exchange for honest reviews I snapped up the chance. Many thanks to Adrian at Vault Comics and Jamie-Lee at Black Crow PR for these opportunities!

Ok let’s be honest here, it’s an urban fantasy comic with a witch PI and a secret service organisation called MI666. How can you not want to read that??? The artwork previews that Cavan shares regularly on his Twitter just kept making me want to check this one out even more. Plus, as always anything based in London is a big plus to me.

Shadow Service doesn’t mess around. From the get-go, the reader is thrown into a world where it’s clear that the world is dark and unforgiving, and Gina Meyers had her eyes opened to it from a young age. Our protagonist isn’t a happy-go-lucky hippy granting wishes and giving out protections, nor is she looking for missing puppies or helping cats out of trees. Sure she has nothing against animals, in fact, she has a very good relationship with all types of wildlife, however, what I’m trying to say is that Gina’s a foul-mouthed 20-something brunette who curses harry-fucking-potter for having things so easy. She works as a PI primarily to get paid in a job that suits her abilities, and her altruism towards her clients appears to be more guided by her desire to prove to herself that she’s not a monster.

You see, Gina’s got some wicked dark powers that she only knows how to use because they come naturally to her. She has no idea where they came from, what they are or anything else for that matter. What she does know is that she’s powerful, dangerous and so extremely bloody scary that people run away from her. That leaves a girl with some major attitude and trust issues, so when MI66 (they’re actually called “Section 26” but no one, not even their own people call them that) she’s not sure what to believe, and that’s the intriguing thing about Shadow Service; there is no clear good or bad guys. At this point, four issues in, I’m not even sure if there are any good or bad guys. I think that there might just be grey, greyer and extremely murky. Also, in my experience, you never trust a supernatural entity who has chosen to inhabit the body of a child.

The supernatural world that the reader is shown in this first volume of Shadow Service is deep, dark and vivid. Its imagination gone wild and a comic book is the perfect format for it. The art couple with Scott’s writing brings to life both the terrifying and the obscure, highlighted against the dank and wet streets of London.  One thing I appreciated was that even amongst the panels of blood and guts the gore is just the right amount. It’s not over the top and it doesn’t detract from the rest of the scene, allowing you to take in everything including the characters expressions and the smallest of details.

Shadow Service Volume 1 will leave you craving more. Just who are MI666? What is their leader Hex and what is he up to? Will Gina ever fit in with the rest of the team? What is happening in London? And the most important question of all; who is Eddie the Rat really?!

Thanks for reading my review for Shadow Service Vol. 1! I hope you enjoyed it, and I’d love to hear your thoughts 🙂