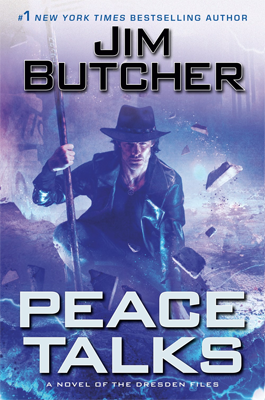 I’d forgotten how good these books are. Peace Talks has sat on my bookshelf taunting me since Christmas and at first, I put it off because I was busy with blog work, then reviews and eventually I hit that moment of uncertainty when you’ve been away from a book series for so long. You know the one. Will it be the same? Was this going to be the book that ruins it all? (and if it did for you, that’s your prerogative but don’t start a debate with me please) – I was acutely aware that the only other book series (not including Star Wars novels) I’d read that had reached this length I’d had to abandon. So far though Butcher has done a great job, in my opinion, of keeping the story going and changing Harry’s life in a way that seems like life changes rather than spitting out random ideas and hoping they work.

Going into Peace Talks I knew that the next book was called Battle Ground which pretty much told everyone that the peace talks in Peace Talks were going to end really badly. The question in my mind was, how big was Harry going to screw up this time? As much as I love Harry he does have a certain knack for getting into trouble and I did expect this to be something involving him. And unsurprisingly, he is right in the middle of things in Peace Talks with quite a few people pissed at him.

The majority of the book was probably a three-star for me as it is quite a mediocre book, with certain moments pushing it up to a three-point five. But it was the grand reveal that got it to the four stars because as usual Butcher worked his magic and blew me away with the monumental situation Dresden and co now find themselves in. They’ve come up against some pretty big bad guys, have done some really crazy things… but this? Could Dresden finally be out of his depth? It was all these feelings, the consequences and the set-up for the next book that brought Peace Talks to a 4-star rating for me. It didn’t surprise me when I later found out that Peace Talks and Battle Ground were originally one massive book and the publisher requested that they be split. It wasn’t just the way this one is written that made me already think that it had been one book split into two;  it was how quickly Battle Ground came out after Peace Talks. It took Butcher six years to write Peace Talks, and before that, it was one book a year. Then suddenly it’s two books in one year? That didn’t add up to me, and the only way it made sense was is if they were originally written together. The way Peace Talks is written and ends pretty much confirmed it for me.

So if you’re a Dresden Files fan and haven’t read this one yet expect things to be a bit different and feel a bit off. It’s still really good, it’s just not the same style we’re used to. In a way, we should be glad that we got the full story rather than a severely edited cut down version even if it does mean we end up with one book that’s not quite what we were expecting.

You can read Jim Butcher’s The Dresden Files graphic novels and many other great books on Scribd the world’s original online reading subscription service right now! You can sign up using my referral code and get 2 months of free reading.