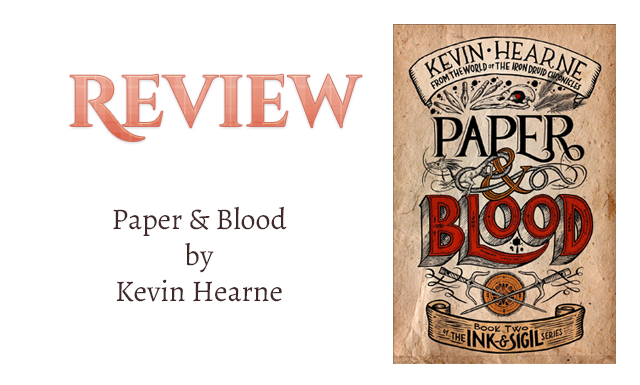 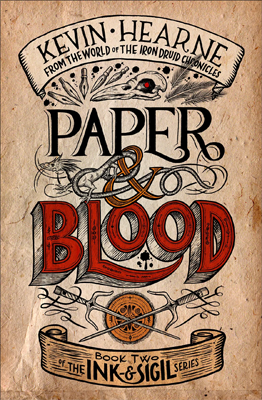 Category: Book Reviews
Author: Kevin Hearne
Genres: Urban Fantasy, Fae/Fey, Fantasy, Horror, Magic, Mythology, Paranormal
Disability Representation: Missing Limb
Series: Ink & Sigil, The Iron Druid Chronicles
Series Number: 2
Page Count: 304
Publisher: Little Brown Book Group
There’s only one Al MacBharrais: Though other Scotsmen may have dramatic mustaches and a taste for fancy cocktails, Al also has a unique talent. He’s a master of ink and sigil magic. In his gifted hands, paper and pen can work wondrous spells. But Al isn’t quite alone: He is part of a global network of sigil agents who use their powers to protect the world from mischievous gods and strange monsters. So when a fellow agent disappears under sinister circumstances in Australia, Al leaves behind the cozy pubs and cafes of Glasgow and travels to the Dandenong Ranges in Victoria to solve the mystery. The trail to his colleague begins to pile up with bodies at alarming speed, so Al is grateful his friends have come to help—especially Nadia, his accountant who moonlights as a pit fighter. Together with a whisky-loving hobgoblin known as Buck Foi and the ancient Druid Atticus O’Sullivan, along with his dogs, Oberon and Starbuck, Al and Nadia will face down the wildest wonders Australia—and the supernatural world—can throw at them, and confront a legendary monster not seen in centuries.

Paper & Blood was probably the book I was most looking forward to this year and I may have squee-ed a little when I got the NetGalley notification. There may have even been a little dance 😉 If you haven’t read my review for the first book in the Ink & Sigil series you can find it here.

This book was provided for free by NetGalley and the publishers in exchange for an honest review. Many thanks to NetGalley and Little Brown Book Group for the opportunity to review Paper & Blood!

There are a lot of brutal murders by magical creatures and bloody battles fighting them. There is some crude language that I feel I need to mention this time around, since it was quite “shocking” to some people the last time around. If you are familiar with British, especially Scottish slang and humour, none of it will be a surprise to you.

There’s so much to unpack in this synopsis! I’m sad that the second book is already heading out of Glasgow, although I know from having Scottish family members living around the world that no matter where Scots go they take their personality and spirit with them, so I’m sure there will be plenty of Glaswegian spirit still in Paper & Blood. I can see why Hearne has opted to do this in book two, as there’s no better way to give the reader a look at “the global network of sigil agents” than to take the story out into the world.

I’m excited to see Atticus, Oberon and Starbuck again! I finished reading the Iron Druid Chronicles in preparation for Paper & Blood so the way that ended is extremely fresh in my mind. I’m curious to see how these two worlds merge.

I enjoyed Paper & Blood, although, not as much as the first book and I still have a few mixed feelings about it. I didn’t quite expect as much of the action to take place in Australia as it did. Normally books have at least a bit of preamble before they hotfoot it to the main destination named in the synopsis, so I was expecting some wonderful Glasgow action again, and instead, it felt a bit like an afterthought. I just hope that’s not how the rest of the series is going to be because as much as I love the characters, I love a series based in Glasgow much more.

As I mentioned in my first impressions, you can take a Glaswegian out of Scotland… etcetera, and Buck Foi, Al’s trusty hobgoblin was on hand to bring some much-needed Scots to the conversations. It was interesting to have Scots and Australian slang bouncing off each other, and the new character that was introduced was absolutely incredible. It was great to learn more about sigil agents through that character and from a new perspective to what we have already seen.

While I was previously excited about seeing Atticus, Oberon and Starbuck again, I found the excitement wearing off as the book reached its conclusion, and it became obvious that this was less of a sigil agent and Al MacBharrais book, and more like an Iron Druid Chronicles book with the sigil agents playing side roles. I know that sounds a bit harsh, however, Paper & Blood felt more like a wrap up of the Iron Druid Chronicles series than it did a second book in a spin-off series.

That’s not to say it wasn’t a good book, it was just a bit disappointing (and a tad frustrating) to see Al, Nadia and the whole Glasgow cast have their stories put on hold just to finish a left open thread from Scourged, the last book in the Iron Druid Chronicles series. I’m going to hazard a guess that Hearne was only contracted for nine books and had more of a story to say, and this was the way he managed to do it. Like with the trip to Australia, I’m ok with it as long as book three gets back on track.

Paper & Blood wasn’t a complete waste of time when it came to Al’s story; we find out more about his curses, we find out some very scary stuff about a certain person in his life and umm… someone has come to join him in Scotland and YOU WON’T BELIEVE WHO IT IS. There is also a bunch of hobgoblin lore and I loved the role Hearne has given them in the Ink & Sigil/Iron Druid Chronicles universe; it’s not what you probably expect, but when you think about it, it makes perfect sense. There is also a hobgoblin story in the middle of the book that Buck tells everyone, which is just fabulous.

Paper & Blood wasn’t quite what I expected or what I wanted, but it was still an enjoyable second book in the series. Hopefully book three will return us to Glasgow again and the storyline with Al’s curses will progress a bit further. He picked up a few clues in this book and had headed to the Mitchell Library at the end, suggesting that the next book could start with something he has found in his research.

There’s bound to be plenty of hi jinks with Glasgow’s latest resident, and there are a few other things from this book that are going to come up at some point. We saw some of Nadia, but things were a bit hectic, and she was busy using her Battle Seer skills to save the day. There’s a long-overdue chat about some of that, and her friendship with the new resident is going to be both beautiful and hilarious. I almost feel sorry for Al! 😀

Kevin is the NYT bestselling author of the Iron Druid Chronicles, as well as The Seven Kennings, an epic fantasy trilogy, and the Tales of Pell, a humorous fantasy series co-authored with Delilah S. Dawson. INK & SIGIL, a new urban fantasy series set in the Iron Druid universe, was released in 2020.

You can find out more about his work over at his website. You can browse his books on Goodreads. Or connect with him on social media; he’s on Twitter and Instagram!

Interested in more books by Kevin Hearne? Check out a selection of titles in my store. You can find the other books in the Ink & Sigil series here!

Thanks for reading my review of Paper & Blood the second book in the Ink & Sigil series! Don’t forget to check out the rest of my reviews if you’re looking for some more book recommendations 🙂 You can also now sign up for my newsletter to get an email each month with a list of my new reviews!

Sign up for today and get three months free!