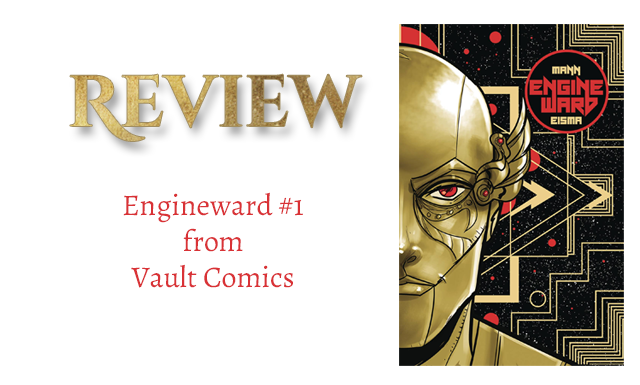 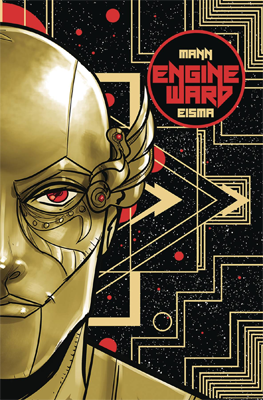 Category: Comic Book Reviews
Author: George Mann
Genres: Comic Book, Dystopian, Science Fiction
Series: Engineward
Series Number: 1
Page Count: 27
Publisher: Vault Comics
Illustrator: Joe Eisma, Michael Garland, Hassan Otsmane-Elhadu
Earth is an ancient myth, long forgotten. Now, the word of the god-like Celestials is absolute, and they rule with brutal efficiency. When Joss, an Engineward, discovers and reactivates the head of an ancient ghoulem, she finds all is not as intended. Her destiny—and that of her world—lies somewhere far beyond the borders of her shantytown.

Join me for my first comic review and it’s for a comic that grabbed my attention the moment I heard about it. When free copies of Engineward were offered in exchange for honest reviews I snapped up the chance. Many thanks to Adrian at Vault Comics for this opportunity!

There were so many things about this comic that quite literally screamed ‘read me!’ at me. There was no way that I wasn’t going to pick this one up, and let me tell you why! Let’s start with the author; I’m a big fan of George Mann having read his Newbury and Hobbes series, Wychwood duology and started his Ghosts series. He quickly got added to the list of authors I follow so when he shared the news of Engineward on his Twitter feed I was already hooked!

Throw in a stunning and enigmatic cover and by this point, the plot could actually be anything; I’m already sold. The plot does sound incredible though, which as a fan of Mann’s work is not a surprise to me. He is an incredible worldbuilder and the idea of post-apocalyptic earth involving beings called the Celestials, based on the Zodiac signs, intrigues me.

In the first issue, we get introduced to the barren landscape of a planet that is nothing like ours. The humans that inhabit have only stories of the time before, and I felt an immediate draw towards these characters who could one day be our ancestors. Every historical age has had its worries of the future, whether justified or not, and none of us knows whether the apocalyptic events we watch I’m Sci-fi movies may happen one day. In Engineward there is no escaping the fact that one day it may happen.

That’s the thing with comic books; they are not ‘picture books for kids’. They’re a whole new way to tell a story and the artist’s work do that on a whole different level alongside Mann’s words. The desolate and barren landscape is strange and alien, and that’s because it is, but the people are all too familiar. They’re just getting on with their everyday jobs, the same old routines, and while ours don’t involve giant alien wildlife, we still recognise the faces peering out from the pages of the comic. As we’re told the story of how these children of Oert came to be here and see their daily struggles we recognise ourselves in them. And right there, just a few pages into the story, we’re sucked in.

Juxtaposed against the bedraggled vision human race is the luxury of the Celestial, each named after a Zodiac sign. It is evident that humans serve them, whether unwillingly or willingly to escape their impoverished lives for something better is unclear. As one of the Celestials with the sign of Cancer on his chest complains about the tedium of governing, he’s quickly scolded by a fellow Celestial he addresses as Gemini, who tells him that “we need them” and to remember where his harem came from. Hmm, the plot thickens!

The Celestials themselves are an eclectic bunch of non-human creatures, from the seems of things. They come in all shapes, sizes and colours, some sporting horns and multiple limbs, and one who seems to be made of air or water. They are beautiful, hypnotic, otherworldly and quite possibly dangerous.

The first issue of Engineward gives readers just enough information to introduce what I believe is going to be a truly remarkable comic series. Like all good comics, it leaves you wanting more, offering so much and dripping with questions. I’ve only touched on a few of them in this review because I didn’t want to spoil issue #1 of Engineward. If this review has intrigued you then I urge you to pick it up for yourself and find out more! 😉

Thanks for joining me for my first comic book review! I’d love to hear your thoughts on this review. I’m going to be checking out the rest of Engineward and if you’d like me to review each issue please let me know 🙂

What do you think of Engineward? Does it sound like something you’d pick up?

For more great books, including many of George Mann’s books, check out Scribd the world’s original online reading subscription service. You can sign up using my referral code and get 2 months of free reading right now!

George Mann is an author and editor, primarily in genre fiction. He was born in Darlington, County Durham in 1978.
A former editor of Outland, Mann is the author of The Human Abstract, and more recently The Affinity Bridge and The Osiris Ritual in his Newbury and Hobbes detective series, set in an alternate Britain, and Ghosts of Manhattan, set in the same universe some decades later.
He wrote the Time Hunter novella “The Severed Man”, and co-wrote the series finale, Child of Time.
He has also written numerous short stories, plus Doctor Who and Sherlock Holmes audiobooks for Big Finish Productions. He has edited a number of anthologies including The Solaris Book of New Science Fiction, The Solaris Book of New Fantasy and a retrospective collection of Sexton Blake stories, Sexton Blake, Detective, with an introduction by Michael Moorcock.

You can browse his books on Goodreads. Or connect with him on social media; he’s on Twitter and Instagram!

Interested in more books by George Mann? Check out a selection of titles in my store. You can find the other issues of Engineward here!