Empire of the Vampire [Sampler] by Jay Kristoff Book Review 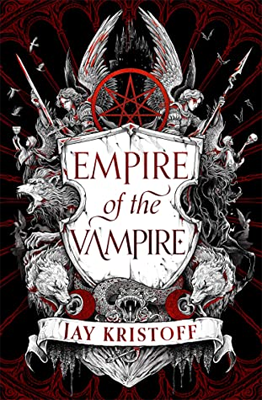 Category: Personal Book Reviews
Author: Jay Kristoff
Genres: Vampires, Alternative Universe, Horror, Religious War
Series: Empire of the Vampire
Series Number: 1
Page Count: 736
Publisher: HarperVoyager
It has been twenty-seven long years since the last sunrise. For nearly three decades, vampires have waged war against humanity; building their eternal empire even as they tear down our own. Now, only a few tiny sparks of light endure in a sea of darkness. Gabriel de León is a silversaint: a member of a holy brotherhood dedicated to defending realm and church from the creatures of the night. But even the Silver Order could not stem the tide once daylight failed us, and now, only Gabriel remains. Imprisoned by the very monsters he vowed to destroy, the last silversaint is forced to tell his story. A story of legendary battles and forbidden love, of faith lost and friendships won, of the Wars of the Blood and the Forever King and the quest for humanity’s last remaining hope: The Holy Grail.

I was provided a sampler of Empire of the Vampire by Jay Kristoff by NetGalley and the publisher, so this is not a review for the entire book. Due to something funky going on with the paging of the e-book I was reading, I’m not sure how much of the book I actually read; I got a bit of a shock when my kindle told me I was reading thousands of pages! I later checked the page length for this review and found that the book is 736 pages long. I still got quite a lot more in this sampler than I have in other samplers, and unsurprisingly it ended on a huge cliffhanger.

I had a bit of a love-hate relationship with this book. Empire of the Vampire is essentially Interview with a Vampire in reverse, and it’s not my favourite style of storytelling. I made my peace with that, however, what really stuck in my teeth was how much of the Catholic religion is enthused in this book. Kristoff has gone down the alternate history route with Empire of the Vampire, and in some ways he’s done a fantastic job. However, putting new names on a concept doesn’t change anything if you keep the base concept the same. Essentially the silversaint protagonist, Gabriel de León, is a monk in a relabelled Catholic Church complete with all the almighties, holy zealousness, corruption and misogynist narrow-mindedness that the real Church was known for back then (and is still known for to some degree today).

This was quite disappointing for me and is what stops me from giving the book a full five-star rating. There is some amazing world-building in this book, and I feel that the religious part could have done with some of the magic that Krisoff has shown to everything else in the book. The rest of the book feels like pure magic, and is everything I wanted from Empire of the Vampire. I was reminded a lot of Jacqueline Carey’s Kushiel Legacy series where she recreated an alternative history, as Krisoff did, including the world religions. Unlike Kristoff, she thoroughly recreated the world religions to adapt to the fantasy world she created. I do not see why Kristoff could not have done the same and kept his storyline the same way.

The point comes down to the language used, and I find myself taken back to a point that author Elizabeth May made during a panel at the CYMERA festival earlier this year; all our curse words are based in religion. The idea of unholiness comes from religion, and I’d have liked to have seen Kristoff go further with that idea instead of borrowing from real life. In the sampler the religion of pagans is briefly mentioned, the Moonmothers, which is similar to real life Paganism. I’m curious to see how that compares, and whether he has adapted their religion to a fantasy setting or like Christianity he has simply just renamed a few things.

The vampire mythology is wonderfully intriguing, and I’ll probably stick with this series after the first book. I’ll definitely be picking it up to finish it, especially after that cliffhanger, as the storyline is one that I really enjoy. I had an idea of where it was going, but not quite where it was going. That was a nice surprise, as nothing had been given away by Kristoff to suggest that possibility.

Unfortunately, the e-book sampler of Empire of the Vampire had no illustrations. I do not know if this is the same for the final version of the e-book, but I would suggest getting this in hardback or paperback so that you can truly appreciate them. Illustrations play a major part of the book throughout it, and if the cover is anything to go by they are going to be glorious.

You can read Jay Kristoff’s other books and listen to Empire of the Vampire on Scribd the world’s original online reading subscription service right now! You can sign up using my referral code and get 2 months of free reading