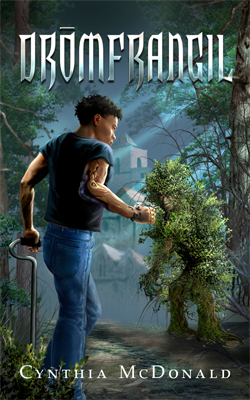 Category: Book Reviews
Author: Cynthia McDonald
Genres: Fantasy, Adventure, Disabilities, Diverse Representation, Magic, Young Adult
Disability Representations: Back Pain, Chronic Pain, Missing Limb, Mobility aid, Prosthetic Arm
Page Count: 362
Publisher: Cinnabar Moth Publishing LLC
Though he doesn’t know it, Marcus Talent is special. Unfortunately for Marcus, he discovers this unexpectedly when he wakes up in an unfamiliar forest, has his prosthetic arm eaten by a horrifying monster, and then wakes up in his own bed, terrified and bleeding. Marcus’s dad, Deacon, has answers. He heals Marcus’s new injuries, promising to answer all of Marcus’s questions about what happened the next day after school. But when Marcus gets home, he finds his dad missing and a ransom note appears out of a screaming hole in the sky. The only demand: travel again to get him back. Helped by his human friends, Marcus sets out to find his dad in a world filled with creatures he couldn’t have imagined. Some of them are friendly. Some of them want to murder him. Or each other. They’re not picky. And everyone seems to know of his famous father, who has been hiding a lot more than an entire other world.

It was the cover of Drōmfrangil that caught my eye because look; there is a disabled character on the cover of a book! Even better it was a fantasy novel!

This book was provided for free by NetGalley and the publishers in exchange for an honest review. Many thanks to NetGalley and Cinnabar Moth Publishing LLC for providing the opportunity to review Drōmfrangil!

There are references to an accident caused by drink driving which resulted in Marcus’ disabilities and left his mother with scars.

Seeing a book with an openly disabled character on the cover gives me so much hope for Drōmfrangil, and I love the fact that the synopsis just talks about his prosthesis as a fact of life (which it is for many people!) and doesn’t make a big deal about it. One of the big issues with disability representation in literature is that it tends to be written by non-disabled authors who feel they have to make a big deal about it. Knowing that Drōmfrangil is written by an author that identifies as disabled (something I checked before requesting this book) makes a big difference for me. I’m looking forward to reading a book written by someone who lives that life rather than just researched it.

While the disabled representation is important to me, I can’t ignore the big walking plant on the cover! I’m guessing this creature is one of the inhabitants of the world that Marcus is able to visit, one filled with creatures both friendly and murderous, and this plant looks a bit shady! Are those glowing red eyes a sign of evil or has this poor plant person just got an unfortunate eye colour? I’m up for finding out! Let the adventure begin 😉

If I was reviewing Drōmfrangil solely based on the worldbuilding then this book would be getting a resounding five out of five stars as a rating. The world that McDonald has created is gorgeous, it draws you in and like Marcus and his friends I wanted to return to explore and learn even more about Drōmfrangil and its people. But worldbuilding is just a part of a book, and as I began to work on my review I began to realise a few things didn’t quite sit right with me about it. They were enough for me to adjust my initial rating from four stars to three and a half.

As I mentioned, I fell in love with the world that Marcus and his friends, Leopold and Sadie, find themselves in. The three native races of Drōmfrangil are highly unusual and they are wonderfully described by McDonald. Her form of storytelling utilises her characters as explorers, and through their questions and actions, the reader learns all about Drōmfrangil. It does mean there is a lot of information to digest at times, however, I personally did not find that this was too much. I like to know about the world I’m reading about and the method used made sense rather than when an author just randomly divulges information on a whim. The three teenagers are all curious characters and were eager to learn about the world just as I was!

It would have been nice to have a map to visually explore while reading, although that was more a wish than a necessity. What I do think is a necessity is a glossary as I struggled with some of the names in the book; even the book’s title gives me trouble as I’ve never been very good with accented letters. While the names were inventive, they were just a bit too far outside English to be as easily understood as they could have been if a glossary at the start of the book was available.

As I mentioned in my first impressions, what draw me to Drōmfrangil was a disabled main character and this book has fantastic disabled representation. While I cannot comment on the accuracy of the representation of a disabled character with a prosthesis, as someone who suffers from chronic pain I can comment on this representation in the book. I appreciated how many times McDonald repeatedly mentioned Marcus’ pain and how he was feeling, whether it was pain or fatigue. That may come across as annoying to non-disabled readers, but for me, it was nice to see myself and my struggles correctly represented in a book for a change. There was a lot of travel in this book and I was right there with Marcus when he struggled to keep going, especially when he wanted to not let his friends down or be a burden to them. Those are feelings that I’m sure will resonate with many people.

A few things bothered me about the two secondary characters and that is what brought my rating down. The first is an element of one of their identities was revealed at the very end of the book, and I feel that by leaving that revelation to the end that it ended up being a tick off a representation/diversity checklist rather than a legitimate moment of character growth. There were plenty of moments when the two characters were together during the book when that particular conversation in question could have happened, and I feel it would have been much more appropriate for it to have been revealed nearer the middle of the book. The way it was done just felt like an afterthought.

The other was the way that the female friend, Sadie, was always seen crying and visibly upset when she was as strong, tough and independent as the two boys, and they were also as upset as she was. That’s not to say that the boys didn’t cry too, they did, but I just feel that it was pointed out more often that Sadie was upset or needed support. It just felt at odds with the rest of Sadie’s character, someone who didn’t hesitate to jump into things or do what needed to be done.

The final issue I had with Drōmfrangil was some of the language choices. For the entire book it was PG, and then suddenly in the last few chapters curse words suddenly appeared. The teenagers were stressed throughout the book, and if they were prone to swearing then they should have been using that language throughout. It wasn’t the swearing that bothered me, it was the lack of continuality. Either they were people who used curse words or they weren’t. You can’t just throw them in wildly. There were a few other times that the overall language used by the teenagers felt out of place for their age. At one point Marcus agrees with someone and states “I wholeheartedly agree”. I don’t know many adults, let alone teenagers, who use that word. It was extremely out of place for a teenager’s vocabulary.

Drōmfrangil is an interesting book with fascinating worldbuilding, an interesting magic system and wonderful disability representation, but some of the other details let it down. I feel that the end of the novel in particular was rushed as that was where most of my issues lay, and the novel ends on an extremely odd cliffhanger. If this is book one of a series then that makes a bit more sense, although there is no information to suggest that is the case. There is so much potential with this book and with more beta reading, and including some sensitivity reading, it could be truly outstanding.

Cynthia McDonald was born in Richmond, Virginia in 1972. She spent her early adulthood raising two sons with her husband and then, after returning to college, enjoyed a fulfilling career as a Respiratory Therapist and a Respiratory Supervisor. This included several years of volunteer work on the Wisconsin state respiratory board, which concluded with a term as the President of the board. She started writing in her forties, after the diagnosis of a low-grade cancerous brain tumor forced her to stop working outside of her home. Cynthia has also lived with disability throughout her adult life, as advancing degenerative disk disease and multiple surgeries have caused her to live with chronic pain and made it difficult for her to remain involved in activities outside of her home. She and her husband recently moved to Oregon to be closer to her oldest son and his family, including her beloved grandson, whose toddler years are adding a lot of delight to her life! Her two German Shorthairs are also a big part of her family, as dogs always have been.

You can browse her books on Goodreads. Or connect with her on social media; she’s on Twitter and Facebook!

What is your favourite book with a disabled character? Let me know in the comments!

You can check out Drōmfrangil for yourself on Scribd the world’s original online reading subscription service. You can sign up using my referral code and get 2 months of free reading right now!