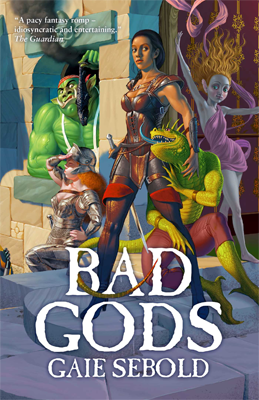 Category: Book Reviews
Author: Gaie Sebold
Genres: Fantasy, Adult, Adventure, Dark Fantasy, LGBTQ+, Magic
Series: Babylon Steel
Series Number: 1
Page Count: 464
Publisher: Rebellion Publishing
You can find anything in Scalentine, the city of portals, but you won’t find a better brothel than the Red Lantern. And its proprietor, Babylon Steel (ex-mercenary, ex-priestess, ex… lots of things), means to keep it that way. But a prurient cult are protesting in the streets, sex workers are disappearing, and Babylon has bills to pay. When the powerful Diplomatic Section hires her – off the books – to find a missing heiress, she has to take the job. And then her past starts to catch up with her...

I was drawn in by the stunning artwork on the cover depicting a host of interesting characters, and I stayed when the story matched the artwork. Intriguing, full of depth, and sexy, Bad Gods is everything it’s cover promises. Join me as we head to Scalentine, the city of portals, where you can find anything…

This book was provided for free by NetGalley and the publishers in exchange for an honest review. Many thanks to NetGalley and Rebellion Publishing.

This novel contains a lot of dark and serious content which some readers may find triggering or disturbing. There are scenes of brutally injured and murdered young women, prejudice against sex workers as well as ongoing harassment from religious zealots towards citizens that they deem as “impure”. There is a very disturbing punishment handed out by this religious sect that results in a murderer becoming permanently disabled and disfigured, and psychologically tortured for the rest of their life.

There is a storyline in which young women are groomed emotionally and sexually by men and women in a position of power. The young women are willing accomplices, at least at first. Please note that this is unrelated to the brothel and other than the previously named religious zealots, everything related to the brothel is written respectfully to sex workers. While this novel contains sex scenes, it is not pure erotica, however, it is more on the adventurous side and may not be suitable for all readers.

To say that Bad Gods is the story of one woman doesn’t do it justice. This is a story of many people, all of whom are connected by the illustrious Babylon Steel, a woman who has many experiences under her belt by the time she reaches the plane of Scalentine. There she settles with her travelling companion, finally choosing to stop running from her mysterious past and eventually opening the Red Lantern brothel. It seems like an old choice for someone who came to the plane as a mercenary, but as we find out, Babylon has had many titles under her belt and brothel owner is just the latest one.

The story begins with Babylon taking a job to find a missing heiress when she realises that the books, which she’s been judiciously ignoring, are a mess and the brothel is desperately in need of some money pronto. She’s spurred on by the fact that something dark is happening on Scalentine, and the local religious faction, zealots who hate women, are ramping up their activity. The idea of a young girl lost and alone in the city is a powerful motivator, especially when it reminds Babylon so much of herself. As Sebold leads us on an investigation through the city of portals, we learn all about Scalentine, and its diverse community. There’s weres like the Chief of the City Militia, fey,  the reptilian Ikinchi, the human-catapillar-like Barraké and many more (you can see some of them in the full view of the cover illustration here on the artist’s website).

As Babylon seeks to find the missing girl she finds a connection to the past she left behind a long time ago, and Sebold expertly interweaves chapters of Babylon’s past between those of the current story. It’s a dark story, full of plots and intrigue, and I absolutely loved it. For those who might find alternating stories, especially one from the present and one from the past, being told at the same time irritating let me assure you that there is a point to it, it’s not just a fun gimmick to explain the character’s background. Both do intersect and lead to a brilliant conclusion.

In some ways I found Bad Gods reminiscent of Jacqueline Carey’s Kushiel Legacy series. While Bablyon Steel is much more of a warrior compared to Carey’s Phèdre nó Delaunay, there are similarities in their stories. This is also the only fantasy novel I’ve found, other than Carey’s work, where sex scenes and fantasy have co-existed without devolving into romance or pure erotica. Bad Gods is very much a fantasy novel, just as Carey’s Kushiel Legacy is a fantasy epic. Likewise, Sebold’s scenes are elegantly written rather than becoming smutty as they so often do in paranormal romance novels.

Humour keeps Bad Gods from getting too dark, reminding the reader that no matter how difficult life has been or becomes, the love and support of found family will get you through your darkest days (and kick some ass too).

Gaie is an accomplished short story writer and poet; her stories have appeared in a number of anthologies.
Gaie was born in the US, and lives in London. She has worked as a cleaner, secretary, till-monkey, stage-tour-manager, editor, and charity administrator. She now writes full time and runs occasional writing workshops. She is an obsessive reader, enthusiastic gardener, and has been known to run around in woods hitting people with latex swords and to declaim poetry in public, though not usually at the same time. She also has the standard cat apparently issued to most fantasy writers.

You can find out more about her work over at her website. You can browse her books on Goodreads. Or connect with her on social media; she’s on Twitter!

Interested in more books by Gaie Sebold? Check out a selection of titles in my store. You can find the other books in the series here!

Thank you for reading my review of Bad Gods, the first book in the Babylon Steel series. This is actually a reprint of the first book, which means the second is already available! I don’t know if there are plans to reprint the second one, so I’m holding off on grabbing it for now. I’m definitely up for more adventures from Babylon and the citizens of Scalentine though!

For my eagle-eyed readers, if the gorgeous cover art looks familiar it’s because it’s by Stephen Player an artist known for his Discworld work.

Do you often pick up books based on their cover art? What was the last book you read because the cover drew you in, and was it as good as the cover? Let me know in the comments!