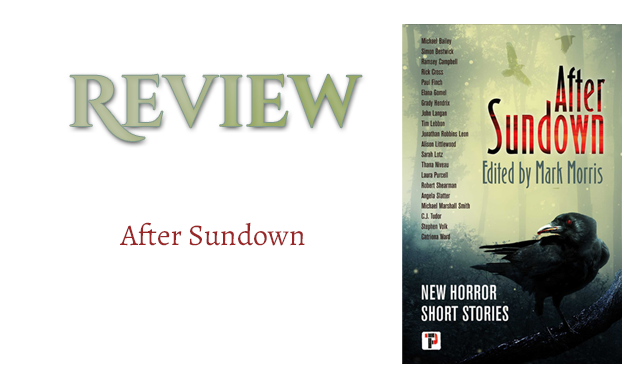 I was provided with a free copy of this anthology via Netgalley in exchange for an honest review.

My first clue to this anthology being a let-down should have been that there’s not actually a synopsis given regarding the content. The synopsis attached to the book is more concerned with telling the reader how the anthology was created rather than what it actually contains. Before reading the anthology, I had overlooked that the synopsis describes After Sundown as a “non-themed horror” anthology. Horror is a vast genre with multiple sub-genres, which I’m inherently aware of, so I go into any horror anthology prepared to meet short stories on a variety of topics. That being so, the stories in After Sundown do not appear to have been collated using any sub-genres of horror that I am familiar with – and as an English Literature graduate, I feel confident enough to say that isn’t due to a failure on my part.

The problem is that the stories within the first half of the anthology are avant-garde. It isn’t that they’re “non-themed horror”, it’s that the idea of horror the author has chosen to portray in their story is so experimental that it simply doesn’t relate to anyone but the author. One particular story is focused on a man who donates blood and recounts the time the world’s overpopulation figure suddenly began to count down instead of up. There’s no twist, it is literally pages of a man giving blood, remarking on the hundreds of people are dying every day and the lack of blood donations. While this is all horrific, it isn’t a horror story and is also extremely distasteful during a pandemic. If the author wanted to use the genre to comment on the pandemic and/or blood donations in a time of crisis, they failed.

Other stories in the first 50% have the fatal flaw of bad pacing. They read like a chapter in a book, leading up to action which would finally reach its climax in the next chapter. The problem with the short story format is that there is no next chapter. One interesting story took forever to get to the point where the heroine realises she has the magical abilities to save the day, only for the story to abruptly end with her going to do just that. Did she manage to use her magic to save everyone? Who knows.

The second half of the book was much better. It wasn’t that these stories suddenly towed the traditional horror storyline; they were just better paced, they made sense, and they chilled you to the bone. They felt as though they were written with the reader in mind (with the aim of terrifying the reader!), not just random ideas that were thrown onto a page, so they could say ‘look ma, I got published!’. These were the stories that I expected when I picked up this book, and if this is going to be an annual publication, that is what the editor/s need to focus on.

I never did work out why the anthology is called ‘After Sundown‘; even a non-themed anthology still has something that links the whole thing together.