ME & Me: ME Awareness Week – Journey to a Diagnosis 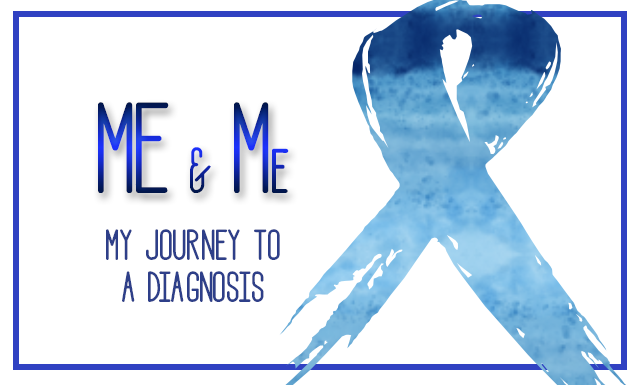 Welcome to the first article of my segment on ME/CFS as a part of ME Awareness Month 2021. As outlined in my introduction post I’m going to be talking all week about Myalgic Encephalomyelitis (ME) also known as Chronic Fatigue Syndrome (CFS).

Today’s article focuses on my journey to a diagnosis, starting with when I first noticed symptoms and what those symptoms were. I would like to stress that ME/CFS is a complicated condition and no one person’s experience is alike. What I’ve experienced may be totally different to someone else’s and that does not invalidate either experience. I am sharing my experience to help spread awareness and help others going through the diagnosis process.

Disclaimer: This goes without saying, however, for legal purposes I am stating that I am not a medical professional. Any views and opinions expressed in this post are based on my own personal experiences. If you believe you may have ME/CFS please seek help from a medical professional and/or advice from a registered charity such as ME Association.

I first began to show symptoms about a month into my Masters in October 2015. One day I woke up and all my glands/lymph nodes were swollen and painful. I can tell you from experience that we have a lot more glands in our body than we realise (this handy page has a map of the system). You may be aware of them in your throat, stomach and groin, but did you know that you have some behind your knees and in the crease of your elbow too? I certainly didn’t until I developed ME/CFS.

I was feeling generally under the weather too, and that wasn’t unexpected considering I’d just started University. At that time of year, a University campus is a petri-dish of germs, so I didn’t think much of it and waited for whatever virus it was to disappear. As someone with multiple chronic illnesses and a tendency to get sick, this was nothing new to me – or so I thought.

When the symptoms failed to relent I got an appointment to see a doctor. Unfortunately, I wasn’t able to see my usual doctor and had to see an alternate GP. She promptly took blood tests as she believed that I had Glandular Fever/Mono. That would be the first of many many blood tests. In hindsight, I realise now that my mistake was trusting a strange GP and not fighting harder to see my normal GP. Looking back at my blog posts from the time it appears that I had numerous problems doing just that.

The doctor was insistent that my symptoms were presenting Glandular Fever and the blood test was coming up with a false positive. That can happen. The problem was that she needed to take new blood tests over a period of time, and by the time February 2016 came around she had finally decided that I had an unknown “viral illness”. In other words, she had no clue. During the course of my treatment, she did not take into consideration that my symptoms were not really consistent with Glandular Fever. There were some similarities but unlike Glandular Fever my symptoms weren’t limited to my throat, they were body-wide.

At that point in February 2016, I was in limbo. That GP had all but washed her hands of me, telling me it was viral and as we all know there is nothing that can be done about a virus. It just has to run its course. Apparently, there was no cause for alarm for a viral illness that had been going on for five months. In desperation, I managed to finally get an appointment with my normal GP who was at last able to help me.

The problem with ME/CFS is that it has a list of symptoms that is long and varied, and they can apply to multiple other health conditions. Some of them are pretty damn scary. The first thing my GP did was stop messing around with the Glandular Fever theory and start testing me for some other illnesses to find out what was happening in my body.

These included but were not limited to:

There is nothing quite like being sat down at 31 by your doctor and being told that you may have HIV or cancer, however, small the chance might be.

I had two appointments with Infections and Communicable Diseases and they were both incredibly different from one another. The first was with a wonderful female doctor who spent over an hour talking to me and thoroughly examining me, even going as far back in my history as to enquire where I’d been on holiday in the last 5 years. She was absolutely lovely and not only made me feel worthwhile but also hopeful that we’d finally get to the bottom of what was happening to me.

She gave me a couple of options for further treatment; a CT scan or take more blood and a chest x-ray, and see how I was again in three months. She did not want to do the CT scan due to me being a young woman and warned against the risks of radiation. As I had a family emergency and had to leave for London I agreed to wait the three months.

When I returned for the follow-up appointment in September 2016 as far as I was aware the department was going to help me. Instead, the complete opposite happened. I went into the appointment alone as my partner was unable to find a parking space and couldn’t abandon the car. Instead of the nice doctor, I saw before I was seen by the head of the department, a male doctor who was immediately dismissive of me. He told me that my symptoms were due to my weight, and lack of activity. Essentially my symptoms were my fault.

I was dismissed from his office and the department in tears and at an absolute loss as to how I was going to get help. I was certain that what I was feeling was not my own doing. While I was not a medical professional I knew that swollen glands were not the body’s response to weight gain, and I had not had any sudden weight gain either.

Back to Square One

To add injury to insult my GP left our doctors surgery at this time too. She referred her patients to a new GP, and I’ll be honest I wasn’t feeling that hopeful. At the end of my first appointment with my new GP she said ‘we’ll get you fixed up!’ and I remember laughingly telling her that I didn’t think that was possible. True to her word though she got stuck in and she fought for me.

Her first step was referring me to the Centre for Integrative Care, a homoeopathic hospital designed for people with multiple health conditions. Neither of us foresaw what would happen next.

A Diagnosis at last – maybe?

At some point in early 2017 I had my first appointment with a consultant at the Centre for Integrative Care and that was when I first heard the term chronic fatigue. He spoke about it as a given that I had chronic fatigue and that was why I had been referred to him. Surprised, I explained that I actually had painful glands and that was the issue, not fatigue. That was when it was revealed to me that the head of the department from Infections and Communicable Diseases had realised that I had ME/CFS.

Not once was fatigue even mentioned in my appointment with him, nor was it mentioned since. However, in the report sent to the Centre for Integrative Care, he had stated that I had ME/CFS and my consultant was talking to me about it presuming I knew all this. When I got home I read up about ME/CFS and was relieved to find that it did indeed fit with everything I had been feeling for the last year and a half.

Finally, a diagnosis right? Informally at least. Here’s where the problems started.

The Centre for Integrative Care is not a diagnostic institute. It provides treatment for people once they have been diagnosed by other departments, i.e. Infections and Communicable Diseases. While my consultant was happy to start my treatment he couldn’t diagnose me. That duty fell to Infections and Communicable Diseases who had washed their hands of me.

It took my poor GP several months of going between the two squabbling men before finally getting the situation resolved and getting me a diagnosis of ME/CFS.

My diagnosis had taken 3 years.

Even being succinct every step of the way this article has ended up a lengthy read, and that’s fitting considering it was a long road to diagnosis.  I’ve shared this story to let people know what to expect, and also to offer suggestions for what to avoid.

The biggest lesson I learned was to avoid seeing a doctor you’re not familiar with. If you have pre-existing health conditions then see someone who knows your history and recognises how important it is for you to get a resolution. Remember you can always seek a second opinion; that is your right.

If you have any questions pertaining to my own experiences or are going through the diagnosis process at present then please feel free to leave a comment.

Image Credits: All photos are from Pexels.