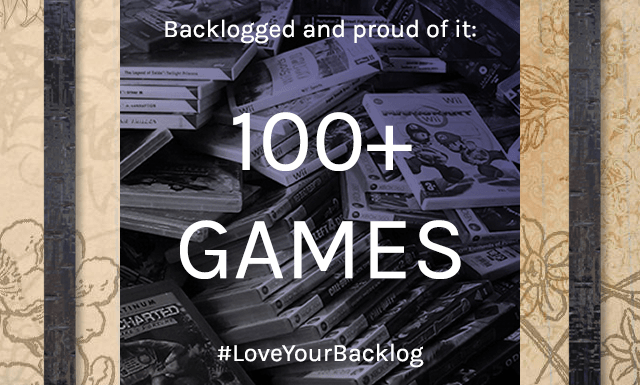 I’ve been trying to do a backlog post and work on my video game backlog for a while now, so when I saw Michelle at A Geek Girl’s Guide post her #LoveYourBacklog post I knew I had to join in!

It’s a week long event run by Kim of Later Levels and LightningEllen of Livid Lightning aimed at dispelling the idea of anxiety, fear or apprehension a gamer might get while thinking of their backlog. Every gamer has one, and the idea that there’s this ever growing list of games sitting there can sometimes be a bit daunting – I know that it can sometimes especially get to me as a disabled gamer because I just don’t have the time and energy to play every game I want to play.

Instead of all that negativity Kim and LightningEllen wanted to do something about it, and create some love and pride for our backlogs. So #LoveYourBacklog week was created and you can read the full story over here.

How to take part

Declare your love for the backlog by writing a post about your game collection before Sunday, 17 February 2019. Nominate unplayed or unfinished titles from your library for the first four of the following categories, and let us know about someone who has great taste in video games too:

My backlog is over 100+ and you can view it over at Grouvee. I’m also on Backloggery but I don’t update that as often – the only reason Grouvee is actually updated is because it auto updates from steam 😉 I not only have access to all my games, I also have access to all my games and then also Chris’ games which is what gives me way over 100. It’s quite possibly over 200 but I’m too lazy to go and check his account and then work out which of his games I have an interest in.

You’re welcome to check me out on steam; my id is jadedlioness 🙂

Game most likely never to be played

Honestly, most of the games I’ve collected on my own I’d probably try at least once. But there are some games that I know without even trying that they’re just not for me and for this question I went straight to Chris’ steam library and had a pretty good idea which one it would be. Yep!

I know that Dark Souls has rich story and lore built into it, but honestly, I can’t say that I see the point of this game. Dying over and over and over again is not my idea of fun. I like the idea of piecing together a story through items, but I also like to be able to walk several feet without dying every few minutes. I’ve sat and watched friends play it, I’ve tried to get into it and I just can’t. This one is just not for me.

If I’m honest that isn’t really answering the question as it wouldn’t make it onto my backlog. Taking another look at the games that I might actually play, I suppose it is more likely to be one of the older Star Wars games like Star Wars Jedi Knight: Dark Forces I or II. I know the storyline already having read the comic version long before I ever got into video games – and even before digital bundles of games existed – but I’ve always wanted to play through them myself. The problem is that I’m really bad for struggling with old graphics. I’m ok with Knights of the Old Republic I & II, they’re not too bad, but anything older and I just can’t handle how terrible the quality it is (it’s quite possible that my really bad eyesight plays a part in this as poor quality graphics make it harder for me to see and thus harder for me to play games). I’m a massive fan of remasters.

I have several DLCs for Dragon Age: Inquisition that I need to play through, or finish playing  so these are probably the shortest on my backlog.

I have plenty of games that will take a long time to play through because they’re the type of games that don’t have an end; sandbox, open world, MMORPGs and the like. But looking at the games that do have a definitive end, I’m pretty sure that Divinity: Original Sin II and it’s predecessor Divinity: Original Sin are likely to take the longest. We’ve played through some of Divinity: Original Sin II and not only does it have immense plots and side plots, but it also has  extraordinarily complex fight scenes. A decent fight scene with multiple characters in our party of four can take us a good half an hour, if not longer – and we’re only on chapter 2! As the game progresses they’re just going to get more complex and take even longer.

Game which has spent the most time on the backlog

Vampire the Masquerade: Bloodlines is the game that made me realise that I can’t play games with terrible outdated graphics. This game is perfect for me. It’s got all the ingredients that make the perfect game for me… and then I started to play it, and I tried, I really did. I just couldn’t get past the terrible quality of the graphics. This is definitely on my ‘please will someone release a remastered version!’ list. I know make a point of waiting and buying a remastered version (which I did for Bioshock I & II) for older games like this so that they don’t just sit wasting away.

The person responsible for adding the most entries to your backlog

Joint responsibility for this goes to my fiancé Chris and myself. While he buys more video games than me, and therefore, gives me wider access to games (plus he has a humble bundle subscription as well), I keep my eyes out for free versions of games. Whether it be free versions of newer games that are on a special offer for a short time at Epic Games or older games by companies like EA and Ubisoft. As I started playing games much later in life than most gamers I missed out on a lot of older games so I’ve slowly been amassing a collection of older games for free with intention of at least trying them at some point – that point still hasn’t gotten here but I keep trying. As I said at the start I’ve been trying to work on my backlog multiple times and currently have one such mini-project sitting in my draft folder waiting for me to feel well enough to start it up again.

I also have a really bad tendency to like MMORPGs and sandbox games which not only take a lot longer but are pretty much never-ending! I have several of both in my backlog and Chris and I are slowly making our way around the MMOs together – we actually had to make a list/deal because we just kept getting so lost and never got back to Star Wars: The Old Republic (still haven’t!).

I hope you liked this little journey through my backlog. Hopefully I will get back to my backlog related projects soon and be able to share more with you!

Is it something that you look at with shame and worry, or as an eager challenge?

What game are you planning to play next?

Image Credits: Frame by HelenaGrimm., Texture used in banner is from MyRiotWorld.